Build Your Own VPN to Pimp Out Your Gaming, Streaming, Remote Access, and Oh Yeah, Security 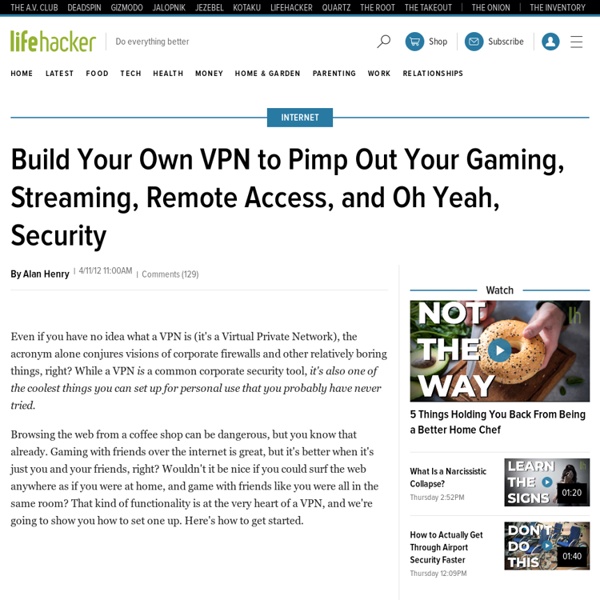 Should I Run a Second Operating System in a Virtual Machine or Dual Boot? Dear Lifehacker, I've seen you talk about running Windows on a Mac by dual booting, as well as dual booting Windows 8 alongside Windows 7. But you've also talked about how to run Windows 8 in a virtual machine. If I want to run a second operating system, which is better? Dual booting or virtualizing? P Sincerely, Double TroubleP Dear Double,P It's not quite a matter of which is "best", but—as is often the case—which is better for your particular needs. Dual Booting Is Great for Games and Other Long Stints in an Operating SystemP Dual booting, which involves separating your drive into two sections called partitions, essentially lets you run two operating systems on one computer completely separate from one another. As such, you're getting the most out of your hardware by dual booting, since neither OS will slow down the other in any way. Virtualization Is Great for Running That One Program, or Testing Out a New OSP SExpand Sincerely, LifehackerP P.S.

How to Silence Your Noisy Computer (and Keep It Cool as a Cucumber) A couple more suggestions: Consider replacing a single, high speed fan with multiple slower fans. Generally, the slower the fan spins, the less noticeable noise will be (even for the same dBA). In my experience, dBA is not truly additive, so a single 40 dBA fan is more noticeable than two 20dBA fans, and may not move any more air. Many cases/motherboards come with PWM ([en.wikipedia.org]) capable connections, which allows the OS to control the fan speed without needing an extra fan controller. If your computer only has a single PWM connector, splitters are available; that way all the fans run the same speed, but can be slowed when not needed. Consider replacing your graphics card (or if you're feeling handy, your GPU's heatsink and fan). Not for the faint of heart, but consider undervolting. Happy tweaking!

How to Make the Most Out of Limited Screen Space (and Even Work Better) I have to agree fully, especially for those who are scared of trying - give it a shot, it actually helps. Actively managing your workspace as opposed to just throwing more real estate at it is a terrific way to really find good ways to get things done. Like you, Adam, I was a multi-monitor addict. In fact up until about 6 months ago I had two 24's and a 20 on my desk, but found I was easily distracted by everything. What really made it hit home for me was when I started doing more on-site side work, where I took my 14in laptop with a 1600x900 panel or my MacBook with a 1280x800 panel. So I switched at work to a single 24, and found my productivity jump. Another tip I found - I do most of my email on my iPad. Great post, Adam. Now with a 1920x1080+ panel it's really hard NOT to actively manage your display.

How to Secure and Encrypt Your Web Browsing on Public Networks (with Hamachi and Privoxy) A VPN tool like Hamachi's good for games, which usually don't support proxies, but for web browsing encryption, a SSH tunnel with AES256 encryption and public key authentication is superior, not only in terms of security, but in portability and "less bulky" software. In order to configure a VPN connection, you need Administrator privileges on Windows computers, plus you have to install software. With a SSH connection, all you need is a SOCKS server+SSH client blend (which does not require administrator privileges, though some applications need them for various reasons. Putty does not.), then point your web browsers proxy settings to localhost, and Voila! Done. OpenSSH is the way to go for Mac/Linux users, and can be used on Windows, but it has to be through Cygwin (which I personally find extremely annoying to use/setup (cygwin)).

Hotspot (Wi-Fi) A diagram showing a Wi-Fi network Hotspots may be found in coffee shops and various other public establishments in many developed urban areas throughout the world. Public park in Brooklyn, NY has free Wi-Fi from a local corporation Public access wireless local area networks (LANs) were first proposed by Henrik Sjödin at the NetWorld+Interop conference in The Moscone Center in San Francisco in August 1993.[1] Sjödin did not use the term hotspot but referred to publicly accessible wireless LANs. The first commercial venture to attempt to create a public local area access network was a firm founded in Richardson, Texas known as PLANCOM (Public Local Area Network Communications). The public can use a laptop or other suitable portable device to access the wireless connection (usually Wi-Fi) provided. Security is a serious concern in connection with Hotspots. The safest method when accessing the Internet over an Hotspot, with unknown security measures, is end-to-end encryption.

Sous-Vide 101: How to Cook the Most Tender and Flavorful Meat You’ve Ever Tasted Sorry I didn't mean to say that a crock-pot cannot be used. I definitely agree that a crock-pot can be used and if you already have one and don't want to spend any money on a rice cooker and the performance is good enough stick with that! However, I think for someone starting from scratch who's going to go to the trouble and expense of building a PID controller they might as well spend a few more dollars on a rice cooker rather than a crock-pot. I didn't say all crock-pots heat from the side but the one I have does and I know I've seen others that do as well. My point about temperature distribution was not that convection is the main method of heat transfer in sous vide cooking. The higher insulation of the crock pot does indeed keep heat in the water bath better than a (non-commercial) rice cooker. Now we reset the experiment so that both baths are at identical initial temperatures. Granted, as you mentioned, for some things a degree or two overshoot may be tolerable.

Windows shortcut keys guide Are you spending too much time using your mouse instead of the keyboard? Using the mouse too much can harm your arm, and good way to reduce that use, is by using the keyboard more, and that's why I'm going to provide you some keyboard shortcuts that may come in handy, once you get used to them. You might already be using the Windows key (unless you are using IBM, because they don't have it) but how much are you using it? For the rest of this document, I'll refer to the keys like this: [Ctrl] = Ctrl key [Alt] = Alt key [Win] = Windows logo key [Esc] = Esc key Etc... So let's start with the feature I like the most: [Win] + [E] This combination opens a new Windows Explorer. [Win] + [R] When I got used to using the Win+E combination I was a bit sad to find out that Internet Explorer does not have a win+? [Win]+[U]: Utility Manager. Anyways... back to the list! [Win]+[D]: Show Desktop! [Win]+[Ctrl]+[F]: Search for computers. [Win]+[L]: Lock the computer! [Win]+[M]: Minimize all windows.

Home · trevp/axolotl Wiki Power on Computer from Internet Now that we live in the broadband era, working in an Internet enabled environment has become a daily routine. It seems that our computers breathe though the Internet connection. Need a new software? Check Internet? New update? The required ingredients involved were: a PC, an Internet connection (preferably broadband) and another remote computer which should have acted as client. the effort would have been in vain. Wishing to provide you with as many useful tricks as I can, I have decided that a helping hand is needed for the situation mentioned above. This hardware feature permits the computer to be switched on through the network. How does the process work? In order to remotely power on your computer you need to send a "magic packet". Do it yourself Before attempting to do the awakening you need to prepare your computer to be responsive to the "wake up" command. Now you just need an application to help you send the magic packet.