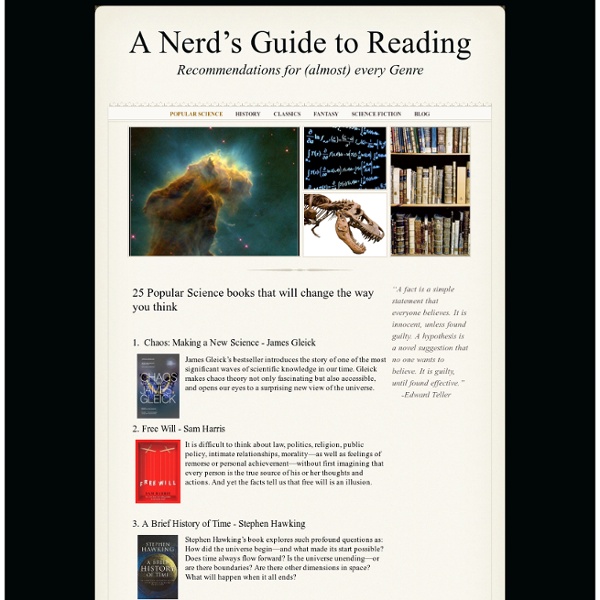 A magnificent, profoundly humane “biography” of cancer—from its first documented appearances thousands of years ago through the epic battles in the twentieth century to cure, control, and conquer it to a radical new understanding of its essence. Physician, researcher, and award-winning science writer, Siddhartha Mukherjee examines cancer with a cellular biologist’s precision, a historian’s perspective, and a biographer’s passion.

Create Something. Donate Login Remember Me Create An Account English Pronunciation If you can pronounce correctly every word in this poem, you will be speaking English better than 90% of the native English speakers in the world. After trying the verses, a Frenchman said he’d prefer six months of hard labour to reading six lines aloud. Dearest creature in creation, Study English pronunciation. I will teach you in my verse Sounds like corpse, corps, horse, and worse.

Victorian Artificial Arm, c.1850-1910 “Made from steel and brass, the elbow joint on this artificial arm can be moved by releasing a spring, the top joint of the wrist rotates and moves up & down, and the fingers can curl up and straighten out. The wearer may have disguised it with a glove. Among the most common causes of amputation throughout the 1800s were injuries received as a result of warfare.” - Science Museum

Why Creative Thinking is Inclusive Thinking, by Michael Michalko Albert Einstein was once asked what the difference was between him and the average person. He said that if you asked the average person to find a needle in the haystack, the person would stop when he or she found a needle. He, on the other hand, would tear through the entire haystack looking for all the possible needles. With creative thinking, one generates as many alternative approaches as one can. Creative thinking is inclusive thinking. 20 brilliant things to make in a jar Via: mycakies.blogspot.com Start saving your old jam jars! From cakes to herb gardens, pies to photo frames, and even entire meals … here are 20 fantastic things you never knew you could make with a jar. (Above: red velvet cupcakes in a jar. Get the recipe here). Via: fatgirltrappedinaskinnybody.blogspot.com

Einstein for Everyone Einstein for Everyone Nullarbor Press 2007revisions 2008, 2010, 2011, 2012, 2013 Copyright 2007, 2008, 2010, 2011, 2012, 2013 John D. Norton Published by Nullarbor Press, 500 Fifth Avenue, Pittsburgh, Pennsylvania 15260 with offices in Liberty Ave., Pittsburgh, Pennsylvania, 15222 Lust is the Purest form of Love Damned are the Men Who consider Desires Depravity For it is that Depravity Wherein lies the Source of Birth and Light! The Open Organisation Of Lockpickers This is a repository of the most up-to-date versions of Deviant's lock diagrams and animations. Seen in all of the TOOOL educational materials and slide decks, these files are all released under the Creative Commons license. You are free to use any of them for non-commercial purposes, as long as they are properly attributed and the same freedom for others is maintained in all derivative works. Please note that these diagrams have evolved and developed over time. While Deviant is still proud of the older versions of his images, if you still have copies of legacy material they should all be replaced with the latest versions available here. Each image shown below in thumbnail form can be accessed in high resolution individually, or you can obtain the full set from the zip archive at the bottom of this page.