Bloody Disgusting! - Your #1 Source For All Things Horror 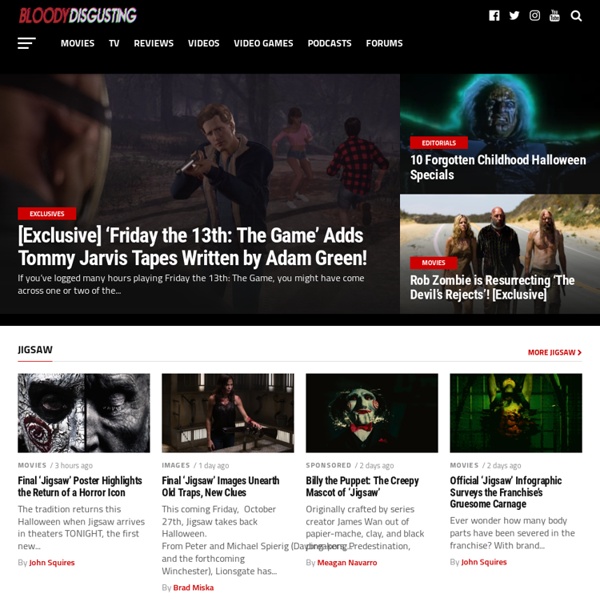 Latitude And Longitude Lookup The following websites are the best I've found for looking up or finding your latitide and longitude online (for free, of course). Each link will open in a new window. Websites do change ... so if the links no longer work, let me know (use the "contact" link at the bottom of the home page). Full List - Top 10 Ridiculously Violent Movies - TIME Mel Gibson’s portrayal of the crucifixion of Jesus Christ and his final 12 hours alive can best be summed up by a quote from film critic Roger Ebert. “The movie is 126 minutes long, and I would guess that at least 100 of those minutes, maybe more, are concerned specifically and graphically with the details of the torture and death of Jesus,” Ebert said, also writing that it was the most violent film he had ever seen. That’s Roger Ebert saying that — a man who has seen more films than most people ever will.

WTF with Marc Maron Podcast Ira writes: Right now, pretty much every comedian without a network TV show has his own podcast, but Marc Maron's WTF Podcast, here on the web or here on iTunes has distinguished itself as the New York Times of comedy podcasts, and by that I mean the definitive comedy podcast of record. Start with the two-part expose/investigative report into how Carlos Mencia steals other comedians' material, which begins in Part One with Mencia totally denying any wrongdoing and continues in Part Two with other comedians coming forward with evidence and Mencia rushing to Marc's house from the airport, no kidding, to finally cop to his wrongdoing. Or take the amazing two parter with Judd Apatow (one and two), where the executive producer of Freaks and Geeks and director of Knocked Up digs out recordings of the radio show he did in high school as an excuse to meet his favorite comedians and interview them about how to get started in comedy.

Bests and Essentials Lists Our annual Best of the Year Listener Poll: Every year we ask you to tell us what music you've discovered and loved, and we tell you our personal favorites, too. We've also asked for your all-time Essential favorites in several forms. This works best as a dialogue, right? The Best Of... Poll results and staff faves by year. American Icons Amidst his wigs, Campbells Soup cans, urine paintings, and constant entourage of beautiful people, Andy maintained a semblance of a rich inner life. If you want to stay thin, he advised, always order the food on the menu you don't want to eat. Warhol was the leader of the pack in Pop-land. Born and raised in Pennsylvania, he got his start in the art world doing drawings for "Glamour Magazine" and went on to become a fabulously successful New York illustrator.

princess pear by Madisyn Taylor Over time, we have learned to suppress some of the most fun aspects of our individuality. Most of us express our distinctiveness in many ways throughout our lives. Although, as we proudly share our offbeat traits and preferences with the world, we take great pains to downplay those eccentricities we ourselves deem odd. Proust and Nabokov Look at Romantic Love Humbert Humbert's passion for the young girl, Lolita, in the novel of the same name by Vladimir Nabokov, has many similarities to the story of Messr. Swann's passion for the young woman Odette in the Marcel Proust novel "Swann's Way," the first book of his epic "Remembrance of Things Past." First, the similarities in these two relationships and then the only major difference I can see. In both instances the man's love--Messr. Swann in Swann's Way and Humbert Humbert in Lolita--is entirely subjective, in that the Man seems to be in love with his idea of what the woman is like, which has little to do with the reality of the woman. In both novels this leads to tragedy, albeit in the Nabokov novel more than the Proust novel.

Links An assortment of sites both crucial to the Palahniuk fan and friendly to The Cult Will Christopher Baer - The official site for the badass author of "Kiss Me, Judas" and "Penny Dreadful." This site is webmastered by Mirka and I and yes... it kicks ass, as Chris himself posts blogs every week. Check it out! Emotional Skills Toolkit: Bring Your Life Into Balance We often hear from people who feel overwhelmed by stress, family, work and relationship problems, health challenges, and painful emotions. They’ve tried many approaches to help themselves feel better, but they just can’t seem to follow through, or what they’ve done hasn't helped them enough. If this sounds familiar, you know that it’s all too easy to become discouraged when you’re stuck. The problem is not willpower—all the willpower in the world won’t matter if you can’t manage stress or keep your emotions in balance. The good news: you can learn these important emotional skills, no matter your age or the obstacles you face. That’s what this free online program teaches.