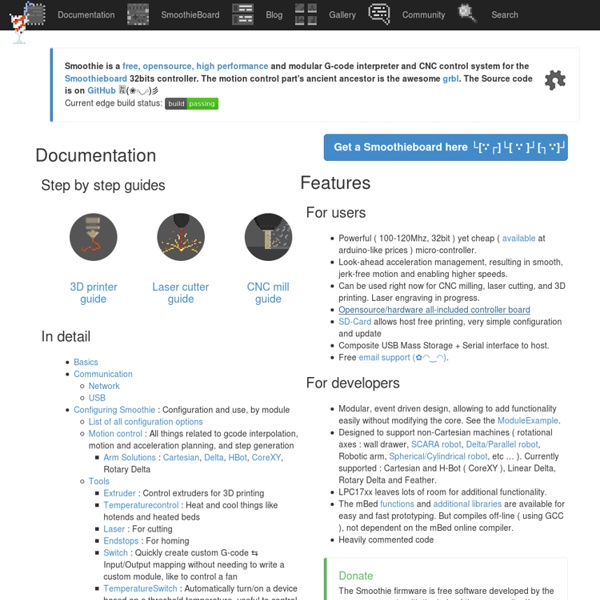 New Part Day: Smoothie For RAMPS When it comes to 3D printer controllers, there are two main schools of thought. The first group is RAMPS or RAMBo which are respectively a 3D printer controller ‘shield’ for the Arduino Mega and a stand-alone controller board. These boards have been the standard for DIY 3D printers for a very long time, and are the brains for quite a few printers from the biggest manufacturers. The other school of thought trundles down the path of ARM, with the most popular boards running the Smoothie firmware. There are advantages to running a printer with an ARM microcontroller, and the SmoothieBoard is fantastic.

Filament Width Sensor Prototype Version 3 by flipper This is a prototype for an optical sensor that measures the width of plastic filament in real time as it goes into a 3D printer or a filament extruder. It is prototype #3 (other 2 are on Thingiverse as well ). The idea is that with a real-time width measurement the 3D printer could compensate the extruded flow for changes in filament width. Also if there is variation between spools of filament, there is no need to calibrate for that when slicing. The g-code is independent of the filament diameter. 3D Printer Error Detection – Chris Barr Builds I’ve been playing around with magnetic encoders a lot lately in the hopes of getting some sort of error-detection system up and running. I think I’ve finally made some headway on it. I’ll start off with the video of where I’ve gotten too.

Sonic 3D Printer Auto Bed Leveling Makes a Swoosh 3D Printering: the final frontier. These are the voyages of another 3D printer hack. Its mission: to explore strange new ways of leveling a print bed. So far, we’ve had servo probes, Allen key probes, Z-sled probes, inductive and capacitive contactless switches, just to name a few. All of them allow a 3D printer to probe its print bed, calculate a correction plane or mesh, and compensate for its own inherent, time variant, inaccuracies. Kossel Clear Delta Arm Crash Sensor by lboucher Hi All This simple hack uses some limit switches to monitor the arms on a delta printer. Should the print head ever crash for whatever reason, the printer would pause, instead of bashing the arms around for hours. Only had 2 crashes in 1.5 years, 1 i think was a power glitch, and the latest was the wires catching on the print itself. Fixed the wires by attaching them to one of the arms via rubber bands. The switches hook in electrically, by simply passing the filament sensor signal through each switch.

Mastering Ball Screws Most inexpensive 3D printers use a type of lead screw to move some part of the printer in the vertical direction. A motor turns a threaded rod and that causes a nut to go up or down. The printer part rides on the nut. This works well, but it is slower than other drive mechanisms (which is why you don’t often see them on the horizontal parts of a printer). Car Repair Tools Flexible Shaft Screwdriver Holder Connect Link For Electronics Shipping to: Worldwide