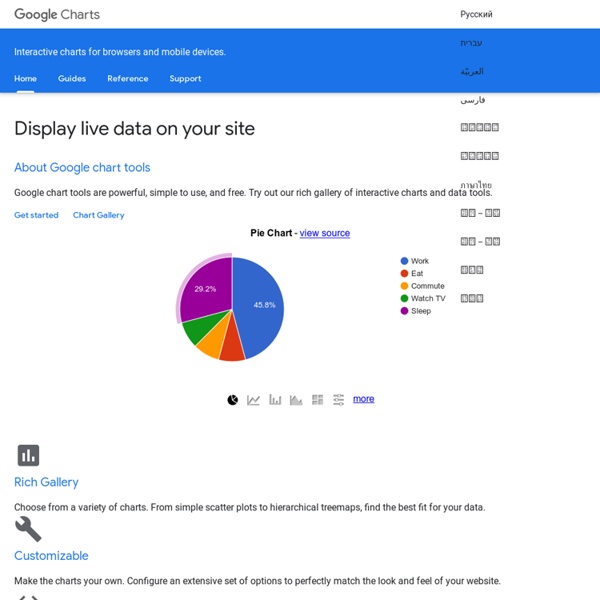 Visualization: Geochart - Google Chart Tools - Google Code Overview A geochart is a map of a country, a continent, or a region with two modes: The region mode colorizes whole regions, such as countries, provinces, or states. The marker mode marks designated regions using bubbles that are scaled according to a value that you specify. A Geochart is rendered within the browser using SVG or VML. Note that the map is not scrollable or draggable; if that's what you want, consider a map visualization instead. 22 free tools for data visualization and analysis You may not think you've got much in common with an investigative journalist or an academic medical researcher. But if you're trying to extract useful information from an ever-increasing inflow of data, you'll likely find visualization useful -- whether it's to show patterns or trends with graphics instead of mountains of text, or to try to explain complex issues to a nontechnical audience. There are many tools around to help turn data into graphics, but they can carry hefty price tags.

The World Factbook People from nearly every country share information with CIA, and new individuals contact us daily. If you have information you think might interest CIA due to our foreign intelligence collection mission, there are many ways to reach us. If you know of an imminent threat to a location inside the U.S., immediately contact your local law enforcement or FBI Field Office. For threats outside the U.S., contact CIA or go to a U.S. Telefonica grabs Jasper cloud to hook up British vending machines High performance access to file storage Telefonica has signed an exclusive deal with Jasper Wireless for use of its machine-to-machine cloud in the UK, hoping Jasper's kit will drive developers to a cellular solution. Machine to machine is already an important market for network operators, but it's going to get much more important as embedded intelligence grows. With starter kits around €120, including three SIMs, Jasper Wireless facilitates quick prototyping and testing, as long as you're happy using O2's network.

Abstract Data Types: Page 1 by kirupa | 4 January 2006 When you write code in Flash, you launch the Actions panel and start writing your statements. You don't think about how the Actions panel retrieves the data, how Flash compiles your code into an SWF, or how memory is managed internally by the Flash application.

Maps Javascript API V3 Reference - Google Maps JavaScript API V3 - Google Code Release Version Last updated Monday, February 17, 2014 This reference documents version 3.15 (the release version) of the Maps Javascript API released November 15, 2013. This release version of the API is a feature-stable version of the API whose interfaces are guaranteed to remain as documented within these pages until this version is retired. To consult the latest (experimental) version of the Maps Javascript API, see the Experimental Development Reference. Tutorials How to Make a State Grid Map in R Something of a cross between a reference table and a map, the state grid provides equal space to each state and a semblance of the country to quickly pick out individual states. How to Make Animated Line Charts in R Sometimes it's useful to animate the multiple lines instead of showing them all at once. How to Make a Multi-line Step Chart in R For the times your data represents immediate changes in value.

How to Create a Personal Information Encryption Scheme to Easily Hide Your Data in Plain Sight I think the article is saying you could use LastPass to generate your LastPass password and the article's encryption scheme to keep the password in plain sight. Then you would not have to remember it. For example if your LastPass encryption key password was something like /%/K\G,_sO¦R¥ÅÀbÝ¾öà~¼ÐÂ4×òO?ù;ñN:è1?xð¸½ñç Cirro Touts Big Data-Ready Analytic Platform Cirro Touts Big Data-Ready Analytic Platform Don't know how to get started with your big data project? BI start-up Cirro claims to have just what you're looking for.

Offers Businesses Seminars and Consulting on Better Charts and Graphs Our first example shows a before figure of multiple pie charts and an after figure of a diverging stacked bar chart. Click Here for a discussion of this figure. Our second example also shows a before figure of multiple pie charts. It’s a series of 42 pie charts presented by VIDA showing male and female representation in prestigious literary journals. We show the first two pies here; the original figure is available at the VIDA site. EX. 2 AFTER (Hover mouse over bars to see counts and values.)