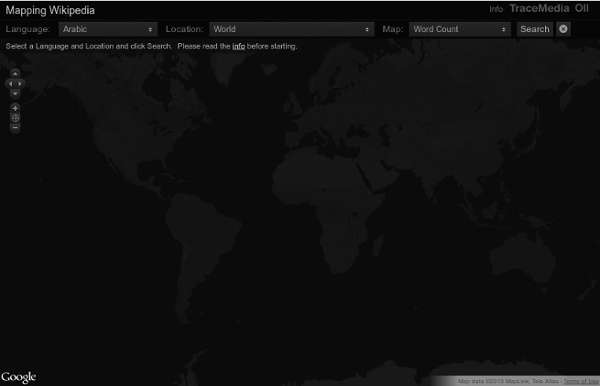 Weather Hopper - The ultimate source for worlds historical weather Carbon map infographic: a new way to see the Earth move | News How can you map the world to show global data in an immediately clear way? How can you show two datasets at once to see how they compare? Kiln, a partnership of Guardian writer Duncan Clark and developer Robin Houston has come up with this beautiful new take on the globe. • The map works best in newest versions of Chrome, Firefox or Safari• Who made this graphic? Vikidia

Internet Traffic is now 51% Non-Human So you thought the Internet was made by and for people? Think again. A study by Incapsula, a provider of cloud-based security for web sites (mind you where this data comes from), concludes that 51% of all Internet traffic is generated by non-human sources such as hacking software, scrapers and automated spam mechanisms. The study is based on data collected from 1,000 websites that utilize Incapsula’s services, and it determined that just 49% of Web traffic is human browsing. 20% is benign non-human search engine traffic, but 31% of all Internet traffic is tied to malicious activities. 19% is from ” ‘spies’ collecting competitive intelligence,” 5% is from automated hacking tools seeking out vulnerabilities, 5% is from scrapers and 2% is from content spammers. Presumably these numbers will only rise. Thanks Bruce.

Enduring Voices Project, Endangered Languages, Map, Facts, Photos, Videos Explore Talking Dictionaries The Enduring Voices team is pleased to present these Talking Dictionaries, giving listeners around the world a chance to hear some of the most little-known sounds of human speech. Several communities are now offering the online record of their language to be shared by any interested person around the world. While you probably won't walk away from these Talking Dictionaries knowing how to speak a new language, you will encounter fascinating and beautiful sounds--forms of human speech you've never heard before--and through them, get a further glimpse into the rich diversity of culture and experience that humans have created in every part of the globe. Explore the Talking Dictionaries for yourself. Losing Our World's Languages By 2100, more than half of the more than 7,000 languages spoken on Earth—many of them not yet recorded—may disappear, taking with them a wealth of knowledge about history, culture, the natural environment, and the human brain.

Collections - Old Maps Online: Project Below are brief descriptions of the online digital map collections searchable and accessible through the OldMapsOnline portal. Nearly all the institutions providing online map collections have a much larger paper map collection available at their respective institutions, but the OldMapsOnline portal will only search and provide direct linkage to the online maps. During the JISC funded project we added collections from around the world. The participating institutions are: Biblioteca Nacional de Colombia: The growing digital collection from this national library includes both national and international maps as well as larger-scale maps of strategically important locations. British Library, Map Library: Cartography Associates, the David Rumsey Map Collection: Probably the largest free online digital collection of historical topographic maps and images. Charles University in Prague, The Map collection: Dutch National Archives: Geo-spatial.org, eHarta Project: Land Survey Office Czech Republic:

Wind Map: Historical An invisible, ancient source of energy surrounds us—energy that powered the first explorations of the world, and that may be a key to the future. This map shows you a historical snapshot of the delicate tracery of wind flowing over the US. See the live map for current winds. Wind map prints are available from Point.B Studio. Read more about wind and about wind power. The wind map is a personal art project, not associated with any company. If the map is missing or seems slow, we recommend the latest Chrome browser. Surface wind data from the National Digital Forecast Database. If you're looking for a weather map, or just want more detail on the weather today, see these more traditional maps of temperature and wind.