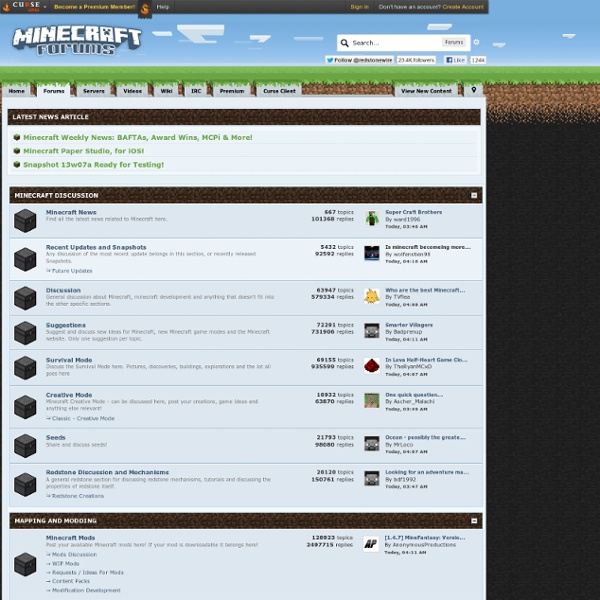 Generation Home Of Happy Wheels - Happy Wheels Full Version Hello pals. I'd like to continue hosting the flash version of Happy Wheels as long as possible. With the loss of certain ad networks, I'm going to try out a few different ad formats on this site as I continue to attempt to regain some of the revenue that went missing. I'll be making a few minor changes here and there to see whatever works best. The discord server, which is now official at has been very helpful to me and the game. Though I would prefer to be silent, I feel obligated to say that I am still working full time on the sequel, and it's still reeeeeaally time consuming.

Spielen.com - Spiele Kostenlos Spielen, Kostenlose Online Spiele, Coole Spiele Important [V1.4.7] Risugami's Mods - Updated. Everything updated for 1.6.2. The mods directory will now be located in the same directory as minecraft jar, unless the default game directory is changed, where it will act like it had on older versions. Read this entire post. Modding now has its own IRC channel on esper.net, #risucraft. Disclaimer: These mods require altering minecraft.jar, and SMP may not work with these mods installed. Frequently Asked Questions Q: What is ModLoader? Q: Where is ModLoader? Q: How do I install ModLoader? Q: Why did you link me that image? Q: Why does my game freeze on the loading screen? Q: Why does my game black screen? Q: Do these mods work with [older version]? Q: The AudioMod description hurt my head, is there some kind of readme that explains it in better detail? Q: How come 7z throws out "Not implemented" OR WinRAR gives me an error when I try to add stuff to the jar? Q: How do I uninstall the mods? Q: What does input == null mean? Q: java.lang.NoClassDefFoundError: ...? Q: How can I best contact you? to Where

4.7][SMP][Forge] Portal Gun - Reconstructed [v4] - Rewritten... again. 1.4.5v1 onwards has been documented. Read this till I can bring myself to editing the topics: 1.4.6 mods work on 1.4.7 and vice versa. In the first week of January I will begin to make changes to the mod page on my blog, so if you're still using the old version (pre-rewrite) I suggest you go read them up before the information gets updated. Recommended you use Forge 482 or later, due to an important fix in FML. Top Issues Crashing with: cpw.mods.fml.common.LoaderException: java.lang.ClassNotFoundException: portalgun.common.PortalGun Please check the new installation instructions below, you no longer have to extract the mod. The old portal gun trailer back in Beta 1.3_01. A little short I made: Some other videos: Spoiler: Here's a really good trailer made by Volxleet Here's an awesome mod spotlight by Direwolf20, explaining what's new in v2. Here's the sequel to his spotlight, showcasing the new features added since his last video Default Portal Gun Bacon Gun

Entertainment Mobs Mobs are living, moving game entities. The term "mob" is short for "mobile"[1] and has been used as a general term referring to any moving entities in games since the first MUDs surfaced. General behavior Mobs are affected by the environment in the same ways as the player: they are subject to physics, and they can be hurt by the same things that harm the player (catching on fire, falling, drowning, attacked by weapons, etc.). Some mobs may be resistant or immune to certain hazards, such as Nether mobs which are immune to fire. Mobs come to exist by spawning in various ways. List of mobs Mobs are listed and classified by their nature below. Note: The list below is categorized according to the PC edition. Passive mobs Neutral mobs Hostile mobs Tamable mobs Utility mobs Boss mobs Bosses have more complicated attack patterns and movements. Bosses Unused or removed mobs Unused mobs are found in the source code, but are not being used at this time. Unused mobs Removed mobs Availability in each platform

Current game modes Brewing Potion brewing chart (excludes splash potions) Brewing (or Alchemy) is the process of creating potions and splash potions by adding various ingredients to water bottles in a brewing stand. [edit] Brewing Potions Brewing "grid" (Ingredients are placed at the top. [edit] Brewing Guide By placing bottles in the lower three slots of the brewing interface and an ingredient in the upper slot, you can distill the ingredient into the bottles and brew potions which may be consumed to grant an effect to the player. Every potion starts with a water bottle, made by filling a glass bottle at a water source or filled cauldron. Brewing can create very useful and lifesaving items. [edit] Tips Start by gathering Nether Wart. [edit] Video [edit] Brewing Equipment [edit] Ingredients [edit] Base Ingredients Base ingredients are the starting point of all potions. [edit] Secondary Ingredients Secondary ingredients imbue an Awkward Potion with a particular effect but do not alter potion duration or intensity. Weakness

Smelting Smelting is a method of producing refined goods in Minecraft, also known as melting, baking, cooking, burning, and producing. It has the same idea as crafting; one must put in acceptable ingredients, and a corresponding output will be given. However, smelting utilizes furnace blocks, which have a unique interface: one "input" field for the object that will be heated, one field for the fuel, and one "output" field for the final smelted product. For example, two saplings (fuel) could be used to smelt one wood (input) into one charcoal (output). To smelt something, an input material and a fuel must be loaded into the furnace. As things smelt, an arrow icon represents the cooking process. If the player leaves a furnace while it is smelting and travels so far that the chunks unload, the smelting process will halt until the player returns. [edit] Recipes [edit] Food [edit] Processing ores and materials [edit] Wasting ores [edit] Other smeltable items [edit] Fuel efficiency [edit] Video [edit] Trivia