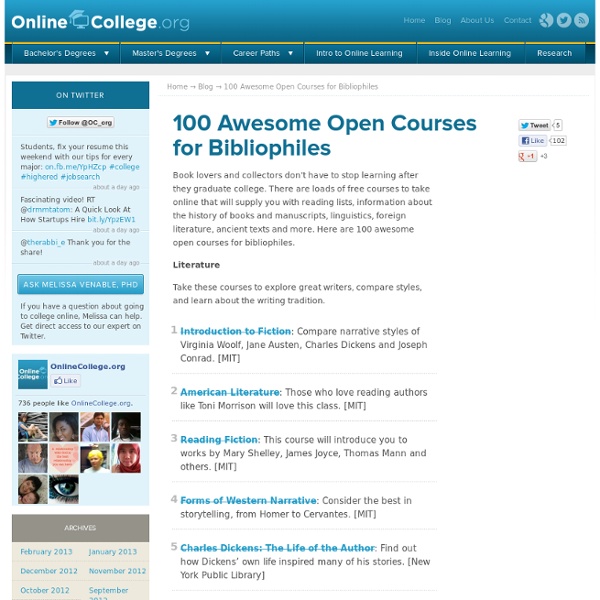 Book lovers and collectors don’t have to stop learning after they graduate college. There are loads of free courses to take online that will supply you with reading lists, information about the history of books and manuscripts, linguistics, foreign literature, ancient texts and more. Here are 100 awesome open courses for bibliophiles. Literature Take these courses to explore great writers, compare styles, and learn about the writing tradition. Introduction to Fiction: Compare narrative styles of Virginia Woolf, Jane Austen, Charles Dickens and Joseph Conrad. Foreign Literature Learn how different cultures produce different literary traditions, from China to Latin America and beyond. Spanish Poetry: This crash course in Spanish poetry is actually a video seminar. Linguistics Bibliophiles who are also interested in linguistics will enjoy learning about the style, expression and language of the books they read. Introduction to Linguistics: Understand the basics of human language. Ancient Texts Related:  Reading, Books, English-y Stuff

Rankings - English - Graduate Schools - Education - US News and Ranked in 2013 | English Rankings Methodology Earning a master's degree or Ph.D. in English can improve your writing skills, sharpen your analytical abilities and broaden your literary knowledge. These are the top schools for a graduate degree in English. Unlock this Information Sign up for College Compass to get complete access to U.S.News rankings and school data. Get AccessNo Thanks Medical Myths, Lies, and Half-Truths: What We Think We Know May Be Hurting Us four nuggets of so-called medical wisdom have in common? They're all myths, half-truths, and misconceptions—pieces of information so familiar we take them for granted without truly considering the scientific truth behind them. In today's information age, when supposedly accurate medical advice and diagnoses can be found online with the click of a computer mouse, medical myths are all around us. But much of this information isn't true, and using it to make decisions about your own health—whether it's how to treat the symptoms of the common cold or how to care for a child or aging relative—can be harmful. Because you are the one who's ultimately responsible for your own health, it's critical to understand the accuracy of medical information; to break down the growing body of misinformation and discover the truth about everyday health and well-being. "You can't assume that what you've always heard must be true simply because many other people believe it and spread it around," notes Dr. Dr.

Khan Academy The William Blake Page William Blake (b. Nov. 28, 1757, London--d. A rebel all of his life, Blake was once arrested on a trumped up charge of sedition. Blake is frequently referred to as a mystic, but this is not really accurate. Most of Blake's paintings (such as "The Ancient of Days" above, the frontispiece to Europe: a Prophecy) are actually prints made from copper plates, which he etched in a method he claimed was revealed to him in a dream. As an artist Blake broke the ground that would later be cultivated by the Pre-Raphaelites.

History of Photography Podcasts Book reviews and gadgets for readers | Written Word Books that will induce a mindfuck Here is the list of books that will officially induce mindfucks, sorted alphabetically by author. Those authors in bold have been recommended by one or more people as being generally mindfucking - any books listed under their names are particularly odd. You're welcome to /msg me to make an addition to this list. And finally, although he's way down at the bottom, my personal recommendation is definitely Howard Zinn's A People's History of the United States, as it turns the ultimate mindfuck: inverting the world-view of our entire culture, and it is non-fiction.

Tufts Open Courses Producing Films for Social Change This is an intensive, hands-on editorial and production course in which students pitch their ideas and then research, report, produce, shoot, write, and edit their own short documentary films on social issues affecting the local community, the U.S., or the world. Readings and discussions focus on current news, media ethics, media literacy, the declining credibility of the press, journalists' responsibilities to the public, social justice issues, First Amendment principles, corporate media ownership, media images of women and people of color, and the powerful role of media (TV news, documentaries, new media, digital storytelling) as tools for civic engagement and positive social change. We will cover the basic principles and techniques of video journalism, including directing, lighting, camera work, composition, interviewing, and character development.