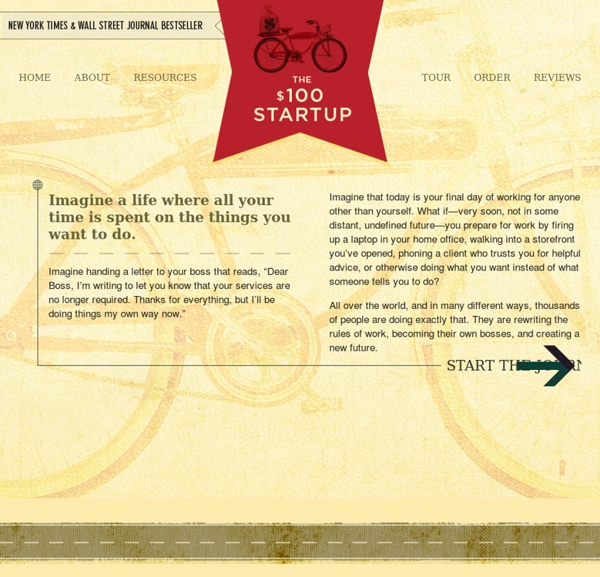 Imagine a life where all your time is spent on the things you want to do. Imagine handing a letter to your boss that reads, “Dear Boss, I’m writing to let you know that your services are no longer required. Thanks for everything, but I’ll be doing things my own way now.” Imagine that today is your final day of working for anyone other than yourself. What if—very soon, not in some distant, undefined future—you prepare for work by firing up a laptop in your home office, walking into a storefront you’ve opened, phoning a client who trusts you for helpful advice, or otherwise doing what you want instead of what someone tells you to do? All over the world, and in many different ways, thousands of people are doing exactly that.

Focus Your Ambitions with the Lifehacker Hierarchy of Goals Setting goals is easy, but prioritizing them is hard. Humans suck at properly weighing what we need to achieve our goals. We take on too much, skip steps, and often, as a result, we give up. Once you commit to a framework to prioritize your goals and cut the junk, achieving your goals gets a lot more realistic. Apply To Accelerators ZFunction University is Latin America's tech entrepreneurship program in the heart of Silicon Valley.We welcome smart entrepreneurs who want to build a rapidly growing and scalable company in life sciences, energy, diagnostics and patient care, and Internet and mobile in e-commerce, education and financial services. How are we different? We offer a program geared uniquely to entrepreneurs whose focus starts in Latin America. We don’t take equity in your startup. We accompany qualifying teams through the first 10 months of their startup [3 months in Silicon Valley], making sure they are ready for additional rounds of funding. What do we offer entrepreneurs?

How to Sell (Earn1k excerpt) I’m excited to show this to you because it includes some of the deeper material from the E1K course — specifically, on selling. Remember, you don’t just sell services. You sell your ideas, your credibility, your sense of humor. You can use this for everything… …but specifically, you can use this to take your existing skills and turn them into income on the side.

How To Back Up PCs To Each Other Via The Internet Using Crash Plan Personal Backing up the data on your computer is vital. Everyone knows this. Yet not everyone does something about it. Why? Grow VC About What is Grow VC? Grow Venture Community (Grow VC) by Grow VC Group, is the first global, transparent, community-based platform dedicated to entrepreneurs and investors. Grow VC enables great ideas and great teams to get visibility with the right investing audience, funding and support earlier. Guide · Project Basics Projects are lists of tasks. Group tasks into projects like category, goal, or a given timeframe. For example, you might create a project called “Spring Convention” to track an upcoming event, and create all tasks related to that event in that project. As the event starts to come together, people will mark tasks complete, allowing you to see the progress toward the overall goal.

3 Ways The Portable Apps Platform Will Make Your Life Easier Portable apps have a huge place in my geeky heart simply because they are quite numerous (if you don’t believe me, check out the Best Portable Apps here). They don’t modify the registry, and can be used in different Windows machines (though there are portable apps for Linux as well). Up until recently though, maintaining portable apps was not pleasant for me.

Beating Fear To Meeting Tim Ferriss In Person The Four Hour Body Launch Party in NYC was a blast. I drove by myself 3.5 hours to NYC not knowing anyone there. I stood outside in line for an hour in 18 degree Farenheit cold. 10+ Best Apps For Your Dropbox If you’ve been using Dropbox for a while, you may not have noticed that a whole ecosystem of applications have been built up to use the service. Over time, these apps have sprung up to fill all of the little holes Dropbox left unfilled. There are apps now for just about everything. It’s possible to sync Google Docs to Dropbox, automatically send Gmail attachments to Dropbox, play music in a browser from your Dropbox music files, encrypt your Dropbox, easily host a website or blog in Dropbox, collect URLs and web clippings to Dropbox and to automate file syncs between all of your social networks and Dropbox. You can even view all of your Dropbox files alongside your Google Docs, Box files and FTP files in the one web interface. If you want to know the best apps to do all of these things, then read on.

Private List — Exclusive Content on finding your dream job and other bonus content from Ramit Many of us believe in a rational world. “If he really cared,” we say, “he’d be doing well at his job.” Now, sometimes that’s true. Sometimes the world is rational and we get what we deserve. But often times, the issue isn’t a lack of ambition: It’s a lack of direction.

How to run two Dropbox instances on the same PC Why would you want to run multiple Dropbox instances on the same machine? We could think of two reasons (1) you’ve maxed out on the 16 gigs or so that each free Dropbox account can give you as a ceiling, and would like to use another account to add more, or (2) you would like to access another Dropbox account for whatever reason, such as a disposable account used by members of your team or that of someone else (such an ex employee of your company) etc. In this posting, we will describe how to run another Dropbox account to your WINDOWS machine using a third party freeware program (i.e. to install two Dropbox accounts running simultaneously on one PC). The application used: DropboxPortableAHKis a free program that can create portable instances of Dropbox, which can be carried on a USB drive, etc. Or it can be run locally alongside your existing Dropbox installation, which is what this post assumes.

The Startup Crowd Is Becoming an Actual Cult This is a trend that business has been on for sometime. I used to work in advertising and the trend there—especially in ad school, when you are young and idealistic—is to present advertising as if it is some noble pursuit. As if this current generation of young creatives will change the world for the better through a combination of love for the work and technology. Welcome to the Pajama Job Hunt!! Alright, here’s how this works. The Pajama Job Hunt: Twitter Series is split into 3 videos. You can sit down and watch them all at once (it will last a total of around 60 minutes) or split them up and implement my tips for each tutorial. Up to you.

The Best Apps and Cloud Services for Taking, Storing, and Sharing Notes Is your desk and computer covered with sticky notes? Do you have miscellaneous pieces of paper with bits of information buried in drawers, your laptop case, backpack, purse, etc.? Get rid of all the chaos and get organized with note-taking software and services. We’ve collected a list of the best desktop applications and cloud-based services for taking, storing, and sharing information. Applications