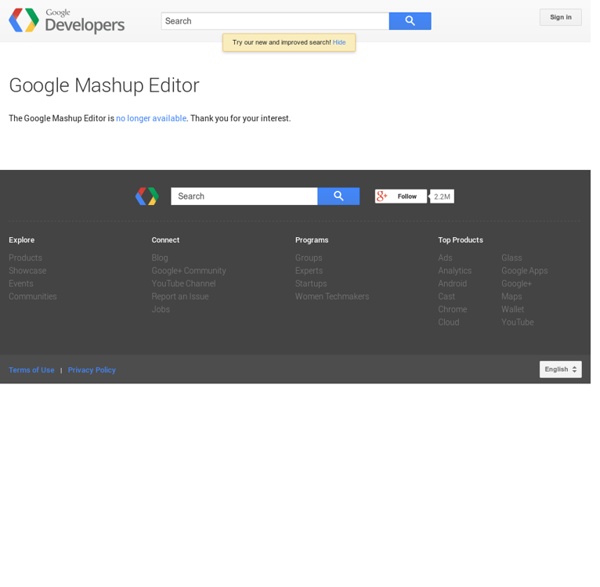 » Demo: BEA’s AquaLogic Pages and IBM’s QEDWiki to battle for co All you need is a quick visit to John Musser's most excellent programmableweb.com or to one of the upcoming Mashup Camps (the next one is coming up in Silicon Valley in July, register here) to know that mashups are the hottest software development category going right now. Mashups, normally a kind of browser-based software that draws on multiple disparate Internet sources to arrive at some unique user experience, span the gamut from finding cheap gas (the data is superimposed on Google Maps) to discovering what local muscians are playing in your area and then sampling their music through downloadable MP3s (before wasting your money heading over the bar). See podbop.org for what I'm talking about (podbop won the first place prize in the Best Mashup Contest at the first Mashup Camp in February 2006). Now, roughly a year after consumers and consumer-oriented developers started grokking the idea of mashups, big business are getting hip to the idea as well.

Apture • Apture.com BigTable BigTable is a compressed, high performance, and proprietary data storage system built on Google File System, Chubby Lock Service, SSTable (log-structured storage like LevelDB) and a few other Google technologies. It is not distributed outside Google, although Google offers access to it as part of its Google App Engine. History[edit] BigTable development began in 2004[1] and is now used by a number of Google applications, such as web indexing,[2] MapReduce, which is often used for generating and modifying data stored in BigTable, Google Maps,[4] Google Book Search, "My Search History", Google Earth, Blogger.com, Google Code hosting, Orkut,[4] YouTube,[5] and Gmail.[6] Google's reasons for developing its own database include scalability and better control of performance characteristics. Design[edit] BigTable maps two arbitrary string values (row key and column key) and timestamp (hence three-dimensional mapping) into an associated arbitrary byte array. Other similar software[edit]

» A bumper crop of new mashup platforms | Enterprise Web 2.0 | Z In today's mashup world, the apparent business potential of highly accessible and easy-to-use mashup creation tools like Yahoo! Pipes and Microsoft's PopFly is still undermined by their apparent lack of readiness for the enterprise. Mashups could theoretically allow business users to move -- when appropriate -- from their current so-called "end-user development tools" such as Microsoft Excel that are highly isolated and poorly integrated to much more deeply integrated models that are more Web-based and hence more open, collaborative, reusable, shareable, and in general make better use of existing sources of content and functionality. Remember, business workers still spend a significant amount of time manually integrating together the data in their ever increasing number of business applications. So what's typically missing from today's mashup platforms to make them both useful and desirable in the enterprise? Are mashups really a major new development model? Seventeen Mashup Platforms

The Huge Collection of Google Analytics Tips | Search Engine Jou Putting aside all recent arguments and gossip as per privacy issues (yep, nothing is probably totally free and Google Analytics should be using its (your?) data in some way), I should confess, I love the tool and use it. I’ve been compiling the list of advanced Google Analytics tips that open up plenty of possibilities to track and evaluate. Today I am sharing the list and expect you to share yours too! Note: I haven’t tried all of these tricks with the new Google Analytics code yet, so if there are any problems with any of them, please report. Track 404 page (more info here): I’ve been reporting on the importance of handling your 404 page properly. Classify your site visitors, e.g. track the browsing and buying behavior of your “customers” (those who subscribed, made a purchase or downloaded your product): <script type=”text/javascript”>pageTracker. Google Analytics help page gives the following examples of the option usage: Track your banner ads with the same code as the above one.

earth album alpha - a slicker google maps + flickr mash-up Web 3.0: When Web Sites Become Web Services Today's Web has terabytes of information available to humans, but hidden from computers. It is a paradox that information is stuck inside HTML pages, formatted in esoteric ways that are difficult for machines to process. The so called Web 3.0, which is likely to be a pre-cursor of the real semantic web, is going to change this. What we mean by 'Web 3.0' is that major web sites are going to be transformed into web services - and will effectively expose their information to the world. The transformation will happen in one of two ways. The Amazon E-Commerce API - open access to Amazon's catalog We have written here before about Amazon's visionary WebOS strategy. Why has Amazon offered this service completely free? The rise of the API culture The web 2.0 poster child, del.icio.us, is also famous as one of the first companies to open a subset of its web site functionality via an API. Standardized URLs - the API without an API So how do these services get around the fact that there is no API?

Over 2 billion email messages migrated to Google Apps While the majority of Google Apps customers choose to “go Google” quickly without transferring old data from their previous IT environment, some companies are reluctant to step into the future without bringing along emails, calendar entries and contacts from the past. To that end we’ve released several data migration utilities, including Google Apps Migration for Microsoft Outlook®, which we announced last week. These tools have helped unshackle thousands of organizations from their previous technology solutions. It’s been some time since several of our migration utilities launched, so we thought we’d summarize our data migration options here. Migrating from Microsoft® Exchange and Microsoft Outlook®: Google Apps Migration for Microsoft® Exchange is a server-side tool that migrates your company's email, calendar and contact data from Microsoft Exchange to Google Apps.

HCI at Stanford University: Ubicomp Mashups Source-code examples of APIs enable developers to quickly gain a gestalt understanding of a library's functionality, and they support organically creating applications by incrementally modifying a functional starting point. As an increasing number of web sites provide APIs, significant latent value lies in connecting the complementary representations between site and service---in essence, enabling sites themselves to be the example corpus. We introduce d.mix, a tool for creating web mashups that leverages this site-to-service correspondence. Prior to our work on d.mix, we conducted fieldwork to characterize mash-up practices in different communities, specifically, hardware hackers, web2.0 programmers, and ubicomp designers.