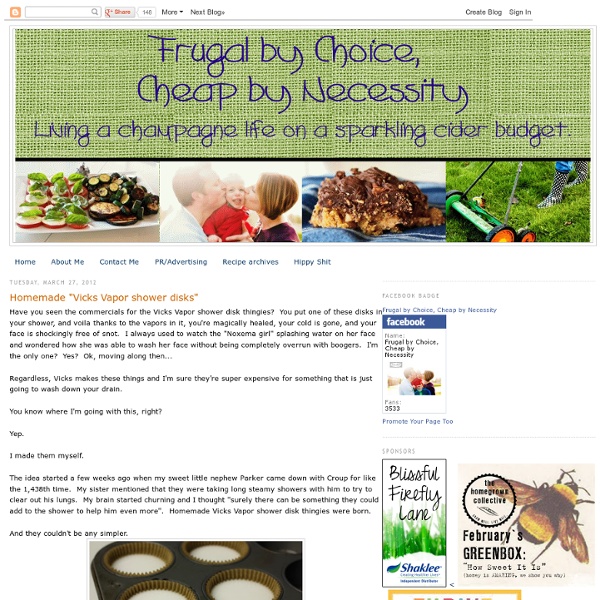 Have you seen the commercials for the Vicks Vapor shower disk thingies? You put one of these disks in your shower, and voila thanks to the vapors in it, you're magically healed, your cold is gone, and your face is shockingly free of snot. I always used to watch the "Noxema girl" splashing water on her face and wondered how she was able to wash her face without being completely overrun with boogers. I'm the only one? Yes? Regardless, Vicks makes these things and I'm sure they're super expensive for something that is just going to wash down your drain. You know where I'm going with this, right? Yep. I made them myself. The idea started a few weeks ago when my sweet little nephew Parker came down with Croup for like the 1,438th time. And they couldn't be any simpler. Sarah's Homemade Vicks Shower Disk Thingies -Baking soda -Water -Essential oils: eucalyptus, rosemary, and lavender. 1) Add baking soda to a mixing bowl. 2) Slowly add water until you've made a thick paste. Related:  blogs

Rich Reads: Historical Fiction Fit For A Queen Harriet Russell I have always loved a great story set in the past. Give me a high-powered historical plot, and I will keep turning those pages until my eyes cross. But if I'm really going to make a meal out of a book, to be nourished and satisfied by it, I crave something more — not just the general excitement of an ancient tale, but a specific time so perfectly evoked that I breathe the straw dust and smell the rough bread baking. The books that follow have it all. Finished Paintbox Quilt The Paintbox Quilt is finished! This quilt is made with 64 - 6.5" blocks in 32 color combinations (8 by 8 blocks with 1.5" sashing). Each combination is a Kona cotton solid and a monochromatic quilting print. One of the blocks in each combination is made with a printed center and outer ring and the other is made with a solid center and outer ring. I had a hard time deciding how to lay out the blocks for the quilt. I alternated the orientation of the squares so the "pulled" corners were going in opposite directions. On the back, I made a pieced panel with a little rectangle of each of the Kona cottons. The letters on the back are just simple Kona cotton appliques, made using this technique. The washed and quilted linen is so incredibly soft, which makes this a very comfy quilt too! I originally had a black and white binding on this quilt, but it was a little "too much" so I ended up going with this gold and white stripe from Kaufman's Pimatex Basics, which I really like.

Modern Parents Messy Kids Im Just A Guy Who Quilts: Bundles of Joy Quilt { A Tutorial } Every once in awhile I run across a quilt design and say to myself, "I can make that!" Even without taking a look at the pattern. Most of you probably had the same reaction when I posted a picture of this quilt. It's a very simple design and takes a few hours to put together. Finished quilt will measure around 24 x 28. Here are the supplies you'll need to make the top: 1 Charm Pack (or 42, 5" charm squares)1 Yard of a coordinating solid STEP 1: Take your solid print and slice 14 strips that measure 1.25" by WOF (width of fabric). STEP 2: Cut each strip of solid into 7" lengths. STEP 3: Take each charm square and slice them at a random measurement straight up and down. (To save some time, feel free to stack several charm squares together when cutting. Here is a photo of all the charm squares cut and stacked in pairs. I used a Hushabye Charm Pack by Tula Pink for Moda Fabrics. Sew a .25" seam along the edge and press your seams open. Again, press the seams open. Happy quilting,

Before & After: "Audree" Gets a Makeover The Fancy Farmgirl Audree was always pretty. She definitely has good bones, but over time Audree's looks had, well, faded a bit. It happens. Tiffany was given the 52-year old trailer, "Audree" as a gift from her husband, and she soon became "obsessed" with fixing her up. Tiffany mixed vintage flea market and yard sale finds with bargains from IKEA and Marshall's. The eating area features a banquette covered in white, faux-ostrich vinyl and handmade curtains. • Read More: Read all about Audree's makeover, along with some great detail shots, at The Fancy Farmgirl . (Images: The Fancy Farmgirl )

Linguine bunnybuns... From outer space! *With pattern* I just love weird elongated limbs! And bunnies. So, I decided to combine the two, resulting in this threesome of rather unusual rabbity things. I was going to just call them linguine bunnybuns, but my boyfriend insisted that they're space bunnies. So now they're linguine bunnybuns... from outer space! W00t! They're so ickle and tiny! I express color through my amigurumi... no really! And if you'd like to make some silly bunnies as well, here's the pattern. Linguine bunnybuns... Materials: - One skein of yarn in the body color of your choice.- An oddment of white yarn for the tail.- Embroidery floss for the nose.- Beads for the eyes.- A hook appropriate to the weight of the yarn. The ears, head, torso and legs are all crocheted as one continuous piece, starting at the tip of the first ear. First ear Second ear and body Start like the first bunny ear, but don't fasten off after R18. R19: ch 3, sc around the 6 st of the first ear, sc into each of the 3 ch made at the beginning of the round. Arms

Baby Monsters! Very basic amigurumi -- EDIT: Photo-tutorial added! EDIT! Just wrote out a long photo-tutorial on my blog so you've no excuse now not to learn amigurumi if you've been wanting to! I made these for a class I'm going to be teaching for people who have never crocheted before, so I had to make them super easy, but still cute and customizable. Hopefully they'll be able to finish the project while I'm with them They're made out of 10 different kinds of yarn, but my favorite to work with was the Cascade 220 wool. I'm getting spoiled now, because if I'm going to be at the yarn store teaching there's no telling how many colors of nice yarn I'm going to "need." ! I'm going to post a pattern on my blog I think, but is pretty simple. That's the tutorial in a nutshell! OH and if you're anywhere near Austin, these are at Knitting Nest, along with MJ, Pee-Wee, and DJ Lance!

Hot Nerd Girl | nerd girls of the world unite In this week’s podcast, Darcy and I discuss the exciting finale of AMC’s The Walking Dead including a very lively debate about how the series should eventually end. Disclaimer: there’s a bit of cursing in this podcast towards the end when we talk about Rick’s final line of the show and also some boob talk, so you’ve been warned! Disclaimer #2: Darcy lives out on a farm and it was pouring rain when we were recording the podcast so there is one brief section in which I sound kind of like a robot because the internet connection was compromised. So have fun with that Let us know what you thought of the season finale of The Walking Dead in the comments below! Darcy and I just had to talk about what’s been going on the last couple of weeks on AMC’s The Walking Dead leading up to this Sunday’s season finale. Hope you enjoy listening to it as much as we enjoyed talking about it! Listen to the podcast here:

a craft blog: Project 3 - A New Technique Tried For my third project for my HOLY MOLY I HAVE TOO MANY CRAFT BOOKS challenge, I decided to venture into new territory...smocking. The project comes from this book, Smocking for Beginners. The book's title is very misleading...Beginners?!!?? With a crafter's eye glance through the book's content, I beg to differ. Pretty gnarly stuff. After practicing for a bit, I jumped into this project, enjoying every minute of handwork. Here's a close up of the smocking Itching to give polka dot smocking a try? Black Marks = Sewing Guides for this tutorial only Red Floss = For this tutorial only 1. 2. 3. 4. 5. 6. 7. 8. 3 books down - 47 more to go ;o) happy day ^*^ kat