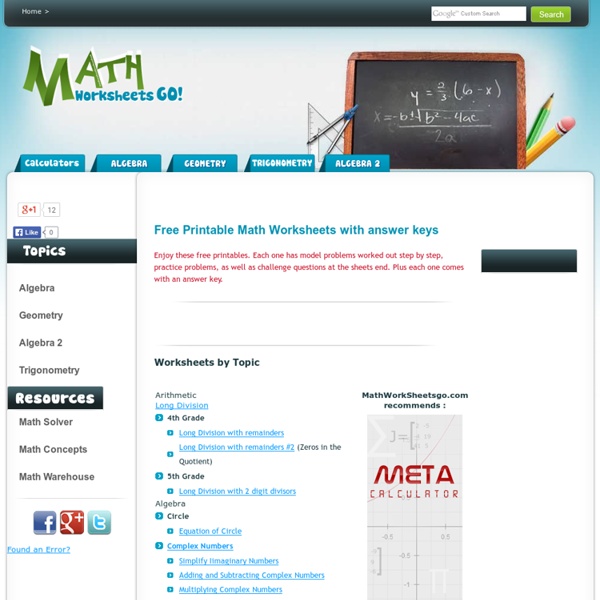 Free Printable Math Worksheets at DadsWorksheets.com Factoring a Quadratic Trinomial by Grouping Another method for factoring these kinds of quadratic trinomials is called factoring by grouping. Factoring by grouping can be a bit more tedious, and is often not worth the trouble if you can find the correct factors by some quick trial and error. However, it works quite well when the factors are not immediately obvious, such as when you have a very large number of candidate factors. When this happens, the trial and error method becomes very tedious Factoring by grouping is best demonstrated with a few examples. Example: The Procedure Given a general quadratic trinomial ax2 + bx + c 1. 2. hk = ac (h and k are factors of the product of the coefficient of x2 and the constant term) h + k = b (h and k add to give the coefficient of x) 3. ax2 + hx + kx + c 4. (ax2 + hx) + (kx + c) x(ax + h) + (kx + c) (note: because of the way you chose h and k, you will be able to factor a constant out of the second parentheses, leaving you with two identical expressions in parentheses as in the examples).

Mathematics QUOTE: "The more progress physical sciences make, the more they tend to enter the domain of mathematics, which is a kind of center to which they all converge. We may even judge the degree of perfection to which a science has arrived by the facility with which it may be submitted to calculation." Adolphe Quetelet Quoted in E Mailly, Eulogy on Quetelet 1874 Adolphe Quetelet received his first doctorate in 1819 from Ghent for a dissertation on the theory of conic sections. After receiving this doctorate he taught mathematics in Brussels, then, in 1823, he went to Paris to study astronomy at the Observatory there. At an observatory in Brussels that he established in 1833 at the request of the Belgian government, he worked on statistical, geophysical, and meteorological data, studied meteor showers and established methods for the comparison and evaluation of the data. From Wikipedia, the free encyclopedia. Statistics form a key basis tool in business and manufacturing as well. See also

Create Custom Pre-Algebra, Algebra 1, Algebra 2, and Geometry Worksheets The Teacher's Corner math Are We Underestimating the Math Powers of Our Youngest Students? New research questions if US math scores would improve if students were exposed to more complicated math early in their school lives. Continue Reading Could Calculus Be A Better Way to Introduce Kids to Math Than Arithmetic? Some educators are beginning to question the assumption that math is best taught in a linear sequence, focusing on patterns and structures instead of computations with elementary students. Continue Reading Math and Inquiry: The Importance of Letting Students Stumble For subjects like math and foreign language, which are traditionally taught in a linear and highly structured context, using more open-ended inquiry-based models can be challenging. Continue Reading Inquiry Learning Ideas for Math and Science With iPads Giving children ample opportunities to develop sound investigative skills at an early age is essential to nurturing their ability to think critically and scientifically as they get older.