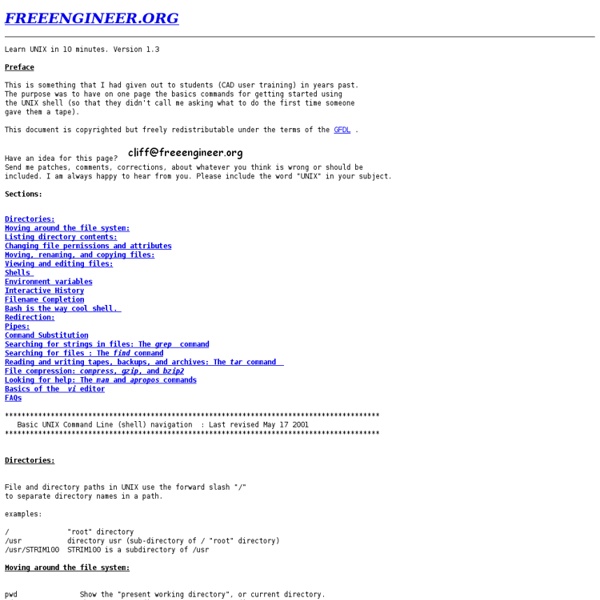 Learn UNIX in 10 minutes. Version 1.3 Preface This is something that I had given out to students (CAD user training) in years past. The purpose was to have on one page the basics commands for getting started using the UNIX shell (so that they didn't call me asking what to do the first time someone gave them a tape). This document is copyrighted but freely redistributable under the terms of the GFDL . Send me patches, comments, corrections, about whatever you think is wrong or should be included. Directories:Moving around the file system:Listing directory contents:Changing file permissions and attributesMoving, renaming, and copying files:Viewing and editing files:Shells Environment variablesInteractive HistoryFilename CompletionBash is the way cool shell.

Finding Moonshine: Dara O'Briain's School of Hard Sums I am co-hosting a mad comedy maths game show with Dara O'Briain on the TV channel Dave. I was away filming for another series last week when an episode was aired that required some calculus. I got lots of tweets and emails about the problem so thought it worth just explaining how you solve it. It's got some great maths in it. Problem: A lifeguard at the beach spots a swimmer in distress in the water. They need to run across the sand to the water and then swim out to rescue the swimmer. Lets suppose the lifeguard's running speed is v1 and swimming speed is v2. We note that v1=2*v2. There is also a cute physical way you could use to solve this puzzle. When you set the differential to 0 and expand it then they will get a quartic polynomial. At school you learn about a formula for solving quadratic equations. Glorious...if you like that kind of thing. Why do we need to do quadratic equations at school? Solving quadratic equations is something we do every time you catch a ball.

Poderosa The Grey Labyrinth: The Labyrinthians' Exchange by Kevin J. Lin Two exceptionally quick-witted Labyrinthians were invited to a party in their honor. The party was to be held in a private house in the city of Mathematica. Mathematica, predictably, is laid out in a perfect grid. Every house's address is composed of two positive numbers, indicating its relative position to the Townhall in the southwest corner. Currently Mathematica is one hundred by hundred houses in area. Our two famed puzzlers, let's call them Samantha and Paul, were both given the address weeks in advance. Paul: I'm afraid I've forgotten the address. Paul and Samantha were being perfectly truthful, and no other information was exchanged apart from this dialog. What was the party's address?

California Learning Resource Network This textbook and Internet resource provides introductory information, concept or skill development in Mathematics for grade 9, 10, 11, and 12 students who are at grade level in a single student situation. Brief Description CK-12’s Geometry delivers a full course of study in the mathematics of shape and space for the high school student, relating the ancient logic and modern applications of measurement and description to its essential elements, processes of reasoning and proof, parallel and perpendicular lines, congruence and similarity, relationships within triangles and among quadrilaterals, trigonometry of right triangles, circles, perimeter, area, surface area, volume, and geometric transformations. This digital textbook was reviewed for its alignment with the content standards only; California’s Social Content Review criteria were not applied. A correlation document is available. Email to a friend. Add to your Reminders.

Attach icons to anything with CSS Filed: Sun, Jan 07 2007 under Programming|| Tags: css1 selectors icons css Conditional CSS selectors work only with modern browsers (FireFox 2.0+, Opera 9, and IE7). Of particular note, the techniques described in this article will work with IE7 only if you supply a document type. Thanks to CSS selectors it's possible to attach icons to anything you want just by adding an attribute of your choosing to your HTML. A few days ago, while using stumble-upon, I stumbled on a site which showed how to conditionally append icons to the end of hypertext links using css. This would attach a pdf icon to the right of any hyperlink who's URL ended in '.pdf' like this. This trick makes use of what the official specifications call "attribute selectors". This works with any attribute. Any span which has an id which starts with 'google' will be assigned a green background. The kicker is that the attributes can be made up. The epiphany came when I realized I could do the selection without needing a tag.

Free Classic AudioBooks. Digital narration for the 21st Century 10 Awk Tips, Tricks and Pitfalls Hi guys and girls, this is the first guest post on my blog. It's written by Waldner from #awk on FreeNode IRC Network. He works as a sysadmin and does shell scripting as a hobby. Waldner will be happy to take any questions about the article. This article takes a look at ten tips, tricks and pitfalls in Awk programming language. Be idiomatic! Update: Mr. In this paragraph, we give some hints on how to write more idiomatic (and usually shorter and more efficient) awk programs. Suppose one wants to print all the lines in a file that match some pattern (a kind of awk-grep, if you like). awk '{if ($0 ~ /pattern/) print $0}' That works, but there are a number of things to note. The first thing to note is that it is not structured according to the awk's definition of a program, which is condition { actions } Our program can clearly be rewritten using this form, since both the condition and the action are very clear here: awk '$0 ~ /pattern/ {print $0}' awk '/pattern/ {print $0}' awk '/pattern/'