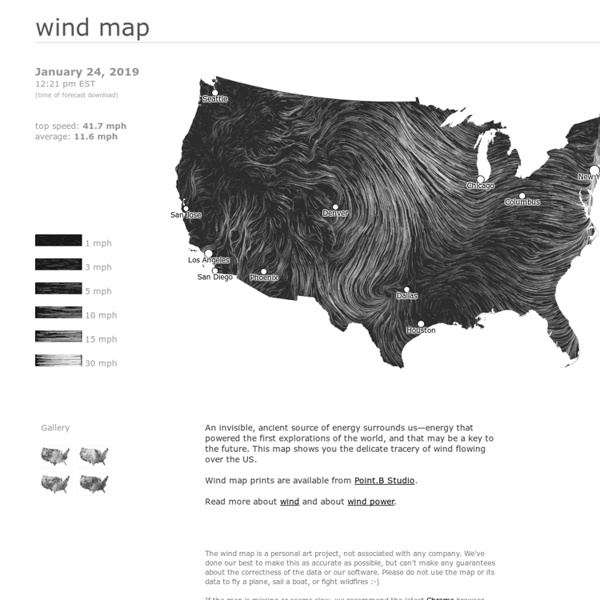 An invisible, ancient source of energy surrounds us—energy that powered the first explorations of the world, and that may be a key to the future. This map shows you the delicate tracery of wind flowing over the US. The wind map is a personal art project, not associated with any company. We've done our best to make this as accurate as possible, but can't make any guarantees about the correctness of the data or our software. Please do not use the map or its data to fly a plane, sail a boat, or fight wildfires :-) If the map is missing or seems slow, we recommend the latest Chrome browser. Surface wind data comes from the National Digital Forecast Database. If you're looking for a weather map, or just want more detail on the weather today, see these more traditional maps of temperature and wind.

Gamers Get Girls | Visual.ly Most guys aren’t grinding away at their Level 45 Battle Mage in order to meet the ladies. But online gaming across the board is becoming more mainstream, and lots of people spend lots of time in virtual worlds — men and women alike. Show More

Want to Instagram the Night Sky? Adapter Puts iPhones on Telescopes When it comes to photographing stars or birds in the distance, most people don't think of launching their iPhone's camera app. A new startup is aiming to change that. The startup, Arcturus Labs, is developing a gadget called Magnifi that attaches an iPhone to just about any lens. It allows users to take iPhone photos through microsocopes, telescopes or binoculars. Magnifi's recently married co-founders Xianne and Isaac Penny have raised more than $13,000 on Kickstarter to fund the product, which they say will eventually retail for about $80. Microscope camera adapters generally cost between $30 and $100 — but they aren't as slick as Magnifi. Because you're taking photos with your phone, they're automatically available for cropping and sharing. It's easy to see where the pair got the idea for the lightweight photo adapter: Xianne is a post-doctoral fellow in Pathology; Isaac is a medical device engineer and amateur astronomer. What would you want to photograph with Magnifi?

The Map | HarassMap Our map and reporting system has many functions. It is a tool for anyone who has been harassed or assaulted and for witnesses to harassment and assault all over Egypt to anonymously share and report their experiences. We map the reports, and each report appears on the map as a red dot. When you click on the dot, the full text of the report is displayed. The reports help us identify trends that reveal the truth about sexual harassment so that we can challenge the myths that make people hesitate to acknowledge the problem and stand up to it. View a list of all reports here.

MapMart Cloud Rolls onto the GIS Scene LONE TREE, COLORADO, January 9, 2012 – With the arrival of the New Year comes the formal release of the MapMart Cloud from MapMart. MapMart has long been the one-stop shop for traditional geospatial data and imagery acquisition and will remain so. The MapMart Cloud will complement MapMart by offering the same high quality and highly accurate data for consumption via high speed data stream. MapMart Cloud offers hundreds of web services of data sets for the U.S. and the world. “Going to the Cloud is the distinct and immovable trend in geospatial data usage,” said Mike Platt, President and CEO of MapMart. Going forward, the location and usage of GIS data will be faster, cheaper and occur with fewer searching and storage issues. The MapMart Cloud offers any user the ability to search a site, determine the web services available and begin using those services immediately either on a subscription or per-click basis.

Watts Up With That? | The world's most viewed site on global warming and climate change The Best Tools for Visualization Visualization is a technique to graphically represent sets of data. When data is large or abstract, visualization can help make the data easier to read or understand. There are visualization tools for search, music, networks, online communities, and almost anything else you can think of. Whether you want a desktop application or a web-based tool, there are many specific tools are available on the web that let you visualize all kinds of data. Here are some of the best: Visualize Social Networks Last.Forward: Thanks to Last.fm's new widget gallery, you can now explore a wide selection of extras to extend your Last.fm experience. Last Forward Friends Sociomap: Friends Sociomap is another Last.fm tools that generates a map of the music compatibility between you and your Last.fm friends. Fidg't: Fidg't is a desktop application that gives you a way to view your networks tagging habits. Fidg't The Digg Tools: One more: Digg Radar. YouTube: Visualize Music Musicovery Last.fm music visual tools: Amazon

The Top 10 Best Maps — Ever! « Geo-Web Junction December 27, 2011 By: Tom Koehler There is one thing I look forward to at the end of the year that has absolutely nothing to do with the holiday season. In fact, it helps to keep me sane by taking my mind off of the holiday shopping madness and dreadfully frigid weather. I’m talking about all these “Best of 2011” lists you see popping up in every magazine and corner of the Internet. It’s a bit of a guilty pleasure of mine, but when I come across one of these lists I can’t help but browse through them, and inevitably get angry when I disagree with who or what they put at the top. Well I think it’s about time for me to try my hand at one of these lists. 10. (source: The Waterman Projection has got to be the prettiest projection at the dance. 9. When asked how big their country is, most schoolchildren in America go ahead and assume their country is much larger than it actually is. 8. Historical maps are always interesting. 7. 6. 5. 4. 3. 2. 1.

Scientists extract images directly from brain Researchers from Japan's ATR Computational Neuroscience Laboratories have developed new brain analysis technology that can reconstruct the images inside a person's mind and display them on a computer monitor, it was announced on December 11. According to the researchers, further development of the technology may soon make it possible to view other people's dreams while they sleep. The scientists were able to reconstruct various images viewed by a person by analyzing changes in their cerebral blood flow. Using a functional magnetic resonance imaging (fMRI) machine, the researchers first mapped the blood flow changes that occurred in the cerebral visual cortex as subjects viewed various images held in front of their eyes. Then, when the test subjects were shown a completely new set of images, such as the letters N-E-U-R-O-N, the system was able to reconstruct and display what the test subjects were viewing based solely on their brain activity. [Source: Chunichi]