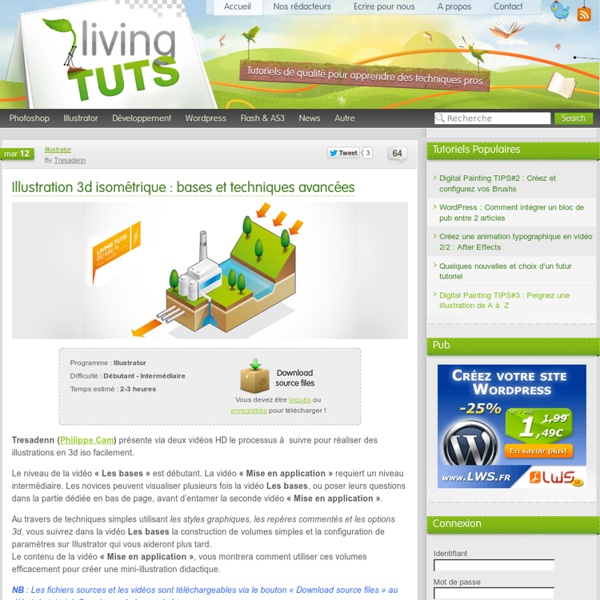 Design a Simple Textured Typographic Poster in Photoshop In this Photoshop tutorial, I will demonstrate how to design a simple, textured and clean typographic poster. Following the steps in this tutorial, you will find techniques for creating a beautiful textured background and working with type in Photoshop. Preview Click on the image below to see the final result in full scale. Tutorial Resources Step 1: Create the Photoshop Document Let’s start by creating a new document. Note: If your work will be printed, you’ll need a high resolution (at least 300dpi) and you should use CMYK color mode. Step 2: Create the Blue Gradient Background Double-click on the Background layer to unlock it. Now create the gradient from the top left corner to the bottom right corner of the canvas. Right-click on the layer and select Blending Options from the contextual menu that appears; this is one way of accessing the Layer Styles dialog window. Create a new layer (Shift + Ctrl/Cmd + N) and then name it "Blue". Step 3: Add Texture to the Blue Background Tutorial Summary

How To Create Outstanding Modern Infographics In this tutorial you will learn that data doesn't have to be boring, it can be beautiful! Learn how to use various graph tools, illustration techniques and typography to make an accurate and inspiring infographic in Adobe Illustrator. Start by using the Rectangle Tool (M) to draw a shape. The entire design is based on a grid of four columns. Condense the shape so it fits within the left-most guide and centre guide. Move the shape over to the right and add another guide to the centre here. Using the Rectangle Tool (M) draw a thin white box on the centre line that will be the width of the gap between the columns. Repeat the process for the other columns with your final result being below. I like to place the most important graphics first and work-in the ancillary charts and graphs afterwards. Early on you can experiment with placing a main graphic that will help give the piece some visual interest. Give the circles a variety of gradients. I'm using a variety of graphs in this infographic.

How to Create Funky 3D Springs in Illustrator Many of us have done this before in Auto CAD, 3D Max or Maya. In this tutorial, we will learn how to create 3D springs in Illustrator. We'll be using the 3D Revolve Tool and some manual effort to obtain this quality vector result. Hope you find it interesting! Republished Tutorial Every few weeks, we revisit some of our reader's favorite posts from throughout the history of the site. Below is the final image we will be working towards. Create a new document. Select the circle and go to Effect > 3D > Revolve. Now we'll duplicate and Send to Back. With the duplicate copy still selected, open the Appearance palette (Shift + F6). In the 3D Revolve dialog box, change the z-axis value to 10 and offset to Left Edge. Now we'll match the faces. Tip: Go to Edit > Preferences > General (Command + K). Select the rings and Alt-drag to duplicate. Now select "ring3" and "ring 4," then match the left face of "ring 4" exactly behind the left face of "ring1." Follow Steps 7 and 8 to extend the spring.

Awesome digital bokeh effect in Photoshop Our last Wallpaper of the Week was an image I had created using Pixelmator, and I really liked the outcome. The best part about it was that it was pretty easy to accomplish in Pixelmator, but I decided for perspective's sake to create the same effect in Photoshop. The process is easy as well, but with a few extra steps. As in the previous tutorial, I will show you how to create a digital bokeh effect, but this time in Photoshop. The process is very easy and we will be using the super powerful Brush Engine, one of the coolest things in Photoshop. Step 1 Create a new document in Photoshop. Step 2 Select the Ellipse Tool (U), and create a circle. Step 3 Select the ellipse and go to Edit>Define Brush. Step 4 Go to Window>Brushes (F5). Step 5 Before we start painting our bokehs let's create a new layer and fill it with a colorful gradient. Step 6 Let's create a new Folder in our Layer Palette. Step 7 Go to Filter>Blur>Gaussian Blur. Step 8 Create another layer and paint more brushes. Step 9 Conclusion

How to Create Sheet Rolls with Custom Spirals In this tutorial, I’ll explain how to make custom spirals (apart from the default spiral tool), and use them creatively in making rolls of paper. So far, I came to know that the spiral tool does not allow a uniform decay (equal spacing) between each wind of a spiral. In this tutorial, I will expose some basic tricks to do so. Hope you find it interesting. Below is the final image we will be working towards. Our editor Sean Hodge has created this video tutorial to compliment this text + image tutorial. Create a new document and enable the Smart Guides (Command + U). Create five more copies of this circle with uniform increment of 10px on each circle (30px by 30px, 40px by 40px, 50px by 50px, and so on). With the Scissors Tool (C), click once on each of the anchor points shown in the red region to cut the joints. With the Selection Tool (V), select the upper bunch of semi-circles and group them (Command + G). Select both groups and Ungroup them (Command + Shift + G).

3D Charts in Adobe Illustrator CS Adding transparency and depth to graphs By Dave Nagel The default graph styles in Adobe Illustrator aren't exactly awe-inspiring. Come to think of it, graphs in general are pretty boring. But they can be critical for conveying information to an audience with a short attention span. So, when the marketing department hands you some data to "jazz up" for a meeting or your editor hands you a table to format for a sidebar, it's your God-given duty as a designer to get that thing into some semblance of presentability or die trying. One popular way to do this, of course, is to generate 3D graphs to create a sense of depth in the image. We'll take this a step further in Illustrator CS by creating a 3D pie chart with transparency and highlights to make the graphic look like semi-opaque plastic. Here's a look at the type of effect we're going for. Creating the chart1. For my example, I'm going to keep things simple and use a single row of data with just three columns. 2. 3. 5. Page: 12Next Page

Working With Blending Modes and Gradients to Create a Dark Elf In this tutorial, you'll learn some great tips and tricks on using multiple gradients and Blending Modes to create an enchanting dark elf character in Adobe Illustrator. You'll see the work flow from sketch to finish and see how creating your own brushes can add those fine refining details your illustration may need. I start by creating the sketch of my design using the Pencil Tool (N) with a fine Stroke Weight of around 0.1pt. This thickness is convenient because it easier when drawing smaller parts when you're zoomed in at about 300-700%. You'll also benefit from using this thickness when you're drawing more detailed areas such as the face and hands. The sketch is created in two steps as a rule. As soon as everything is ready, the first draft can be deleted. When you want to create an effect of the smooth transition of color, the glow in this case, it's best to use a Radial Gradient. Do not be afraid to go beyond the edges of your image. I've started drawing the snakes.