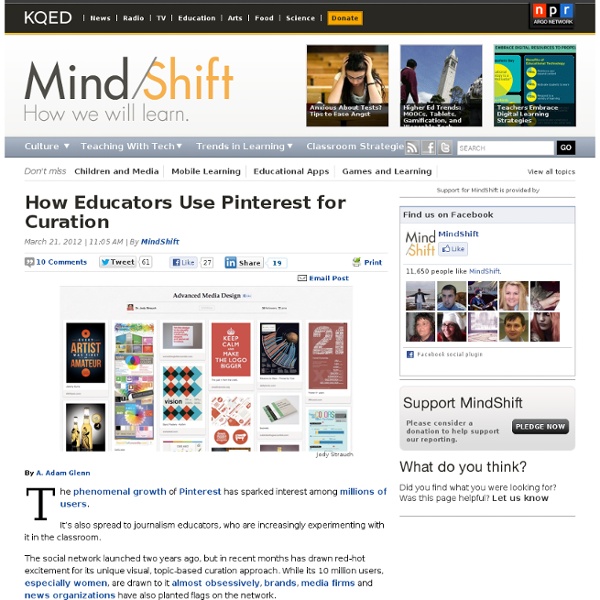 Digital Tools Jody Strauch By A. Adam Glenn The phenomenal growth of Pinterest has sparked interest among millions of users. It’s also spread to journalism educators, who are increasingly experimenting with it in the classroom. The social network launched two years ago, but in recent months has drawn red-hot excitement for its unique visual, topic-based curation approach. Now journalism school faculty are increasingly in on the act. One early adopter was University of Southern California’s Andrew Lih, who last October, long before he and many others knew the site would become a blockbuster, introduced it to online students in an entrepreneurial class to gather what he called a “mood board” for a project on public art. Aggregating images to share with students is an increasingly common classroom use for the tool. Jody Strauch at Northwest Missouri State University has used Pinterest to show good design work to her media design classes. Pinterest is not without its drawbacks.

Four Seriously Cool Information Resources As a librarian, researcher and frequent blogger, I’m constantly coming across incredibly useful online information resources that are most effectively searched using their own site search tools, rather than relying on general-purpose engines to surface their valuable content. I plan to start writing about these on a regular, ongoing basis, using a bullet-point format that highlights the most useful features of each resource, rather than doing in-depth reviews. Without further ado, here are the first four (of many more to come). C-SPAN Video Library Old Maps Online Cost: freeOfficially launched last weekOne search, centralized access to multiple digitized historical map collectionsAbout 60,000 maps available today, with more than 120,000 maps by end of 2012Keyword search, focus by date using slider, search by mapMaterial included so far: A Vision of Britain through Time, Historical Map LibraryBritish Library, Map LibraryDavid Rumsey Map CollectionMoravian Library, Mollova mapová sbírka

Project Gutenberg - free ebooks online download for iPad, Kindle, Nook, Android, iPhone, iPod Touch, Sony Reader On August 26 2020, the Project Gutenberg website underwent some major changes. These changes had been previewed since early 2020, and visitors to the old site were invited to try the new site, including giving input via a brief survey. The old site is no longer available. Please use the navigation menus at the top of the page to find what you were looking for. Below, find a description of the motivation behind the changes. THANK YOU for your patience as we continue to update the website to fix remaining problems, and maintain all the functionality and content that visitors expect. Known issues and “TO DO” items Updates on fixed items Let us know if you are still having trouble with these: OPDS: Issues resolved Kindle: Issues resolved Bookshelf detailed listings: Issues resolved Functionality issues Redirected pages go from https to http inappropriately. Content issues User interface and user experience issues Feature requests (things that are not really broken, but would be good to have) Goals

Know Your Internet: What Is Pinterest and Why Should I Care? - Alexis Madrigal - Technology On the cold, crowded beach that is the Internet, another monster wave has been spotted on the horizon. This wave is called Pinterest and it looks like it could be -- or already is -- the Next Big Thing in social media. This week, Techcrunch blared, "Pinterest Reaches 10 Million U.S. Monthly Uniques Faster Than Any Standalone Site Ever," based on Comscore data. Last week, a study was making the rounds that claimed to show that Pinterest was driving more referral traffic than Google+. We're getting to that point with Pinterest where (in tech circles at least) it feels awkward to ask what it is even if you're not exactly sure. What is Pinterest? The genius of the UI is that when you hit the "Pin It" button, it pulls out all the images on the page you're visiting, allowing you to select just the right one. On Pinterest, anyone can "repin" one of my photos to one of their own boards. Pinterest isn't like Reddit, which is a mix of news and community-created weird stuff. Who uses Pinterest?

How One Response to a Reddit Query Became a Big Budget Flick | Underwire With just a handful of posts about a hypothetical time travel scenario, James Erwin went from web commenter to professional screenwriter.Photo: Robert Maxwell James Erwin, 37, works for a financial services firm in Des Moines, Iowa, writing software manuals. He’s been doing that for a couple of years, and he enjoys it. One Wednesday last August, Erwin rose from his desk around noon. Reddit is a sprawling news site, where “news” is defined by its tens of millions of users—one of the largest communities on the Internet. It’s common for random questions to appear on Reddit’s front page, like “Is there a magnet capable of pulling the iron out of your body?” Erwin, who studied history at the University of Iowa, had been posting on Reddit for about five months. Now, in response to The_Quiet_Earth’s question about time-traveling marines, Erwin started typing. Although Erwin’s success is unprecedented, it’s entirely consistent with Reddit’s ethos.

curator's ǝpoɔ My Best of series You can find all of my “Best” lists in broad categories here. The link to that page can also be found at the top right of my blog: My Best Of Series I also have them all on another page where they are listed in the chronological order in which I originally posted them. You can find that link at the top of my blog by first clicking on About and then scrolling down to Websites of the Year. Two thousand “Best” lists are a lot of best lists! In an effort to make them both further accessible and to update many of them, I began posting “Best Lists Of The Week.” I’ve created about sixty-five of them so far and they encompass a few hundred “Best” lists. You will find these newly categorized lists on a page titled My Best Of The Week, and they’ll be shown as “buttons” (you can see what they look like at the top of this blog post) listed alphabetically (more-or-less). I hope you find the lists, and the way they’re organized, helpful! The Best Pink Panther Fight Scenes For English Language Learners

Everything Pinterest and Tumblr Users Need To Know About Copyright Law On Twitter: To Follow or Not to Follow Recently, I have had students discover my @TheNerdyTeacher Twitter account and follow me. It usually only lasts a few days before they unfollow me -- a few days of my flooding their feed with blog posts, education news and Edutopia articles. The big question I get from kids is, "Why don't you follow me back?" I tell them that I have some guidelines when it comes to Twitter and following students. I thought it would be great if I shared them with all of you that use Twitter as part of your education life. 1) Have a School-Only Account @TheNerdyTeacher is my personal/business account. 2) Create a Set of Follow Rules to Share with Students I always follow a student back if he or she follows me on my school account, but then I tweet them some guidelines that I stick to when following students. 3) Limit the DMs There will be times when students will DM me a question that might be something they do not want to share with the entire Twitter stream. see more see less