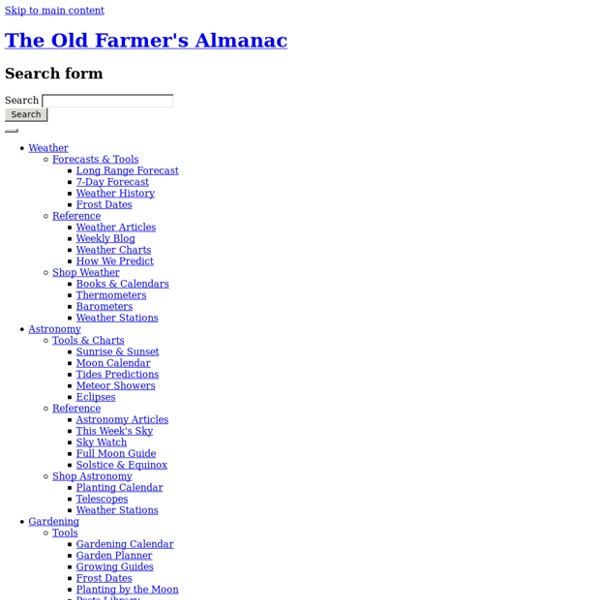 How the Sun Works" When’s the last time you gazed upward and marveled at the mysterious, life-giving force that is the sun? If you believe the whole staring-at-the-sun-makes-you-go-blind thing (which is actually true), you’re probably not doing a whole lot of sun-gazing. But it’s a real marvel: The sun warms our planet every day, provides the light by which we see and is necessary for life on Earth. All of this, and our sun is just a plain old average star, by universal standards. So, how close is the sun? If the sun is in the vacuum of space, how does it burn? In this article, we'll examine the fascinating world of our nearest star. The sun has "burned" for more than 4.5 billion years. We say the sun burns, but it doesn’t burn like wood burns.

The Moon The Moon I had the ambition to not only go farther than man had gone before, but to go as far as it was possible to go.- Captain Cook Copyright © 1995-2011 by Rosanna L. Hamilton. All rights reserved. The Moon has fascinated mankind throughout the ages. On July 20, 1969, Neil Armstrong became the first man to step onto the surface of the Moon. The Moon is 384,403 kilometers (238,857 miles) distant from the Earth. Four nuclear powered seismic stations were installed during the Apollo project to collect seismic data about the interior of the Moon. The Moon was heavily bombarded early in its history, which caused many of the original rocks of the ancient crust to be thoroughly mixed, melted, buried, or obliterated. The Apollo and Luna missions returned 382 kilograms (840 pounds) of rock and soil from which three major surface materials have been studied: the regolith, the maria, and the terrae. The relatively bright, heavily cratered highlands are called terrae. Lunar Nearside Spectacular!

Solar images at SDAC Click on any of the following thumbnail images for the most recent, full-resolution solar image of each type in the SDAC archive. The time and date of each image is below the image description. All times are in coordinated Universal Time (UTC). Images from the Solar Dynamics Observatory (SDO) Atmospheric Imaging Assembly (AIA) A Note on Color Tables The color tables used to display AIA images here are the ones used to display similar bandpasses for SOHO EIT and STEREO EUVI images. Color tables for the 94, 131, and 335 Å bandpasses are still under development. Images from the Solar Dynamics Observatory (SDO) Helioseismic and Magnetic Imager (HMI) Images from other sources Return to the home page for the SDAC.

Moon The Moon is in synchronous rotation with Earth, always showing the same face with its near side marked by dark volcanic maria that fill between the bright ancient crustal highlands and the prominent impact craters. It is the second-brightest regularly visible celestial object in Earth's sky (after the Sun), as measured by illuminance on the surface of Earth. Although it can appear a very bright white, its surface is actually dark, with a reflectance just slightly higher than that of worn asphalt. Its prominence in the sky and its regular cycle of phases have, since ancient times, made the Moon an important cultural influence on language, calendars, art, and mythology. The Moon's gravitational influence produces the ocean tides and the slight lengthening of the day. The Moon is thought to have formed nearly 4.5 billion years ago, not long after Earth. As of November 2014[update], the Moon is the only celestial body other than Earth on which humans have set foot. Name and etymology

Earth Earth is the third planet from the Sun. It is the densest and fifth-largest of the eight planets in the Solar System. It is also the largest of the Solar System's four terrestrial planets. It is sometimes referred to as the world or the Blue Planet.[23] Earth formed approximately 4.54 billion years ago, and life appeared on its surface within its first billion years.[24] Earth's biosphere then significantly altered the atmospheric and other basic physical conditions, which enabled the proliferation of organisms as well as the formation of the ozone layer, which together with Earth's magnetic field blocked harmful solar radiation, and permitted formerly ocean-confined life to move safely to land.[25] The physical properties of the Earth, as well as its geological history and orbit, have allowed life to persist. Name and etymology In general English usage, the name earth can be capitalized or spelled in lowercase interchangeably, either when used absolutely or prefixed with "the" (i.e. Heat

Waiter, There's Metal in My Moon Water Waiter, There's Metal in My Moon Water Bring a filter if you plan on drinking water from the moon. Water ice recently discovered in dust at the bottom of a crater near the moon's south pole is accompanied by metallic elements like mercury, magnesium, calcium, and even a bit of silver. Now you can add sodium to the mix, according to Dr. Rosemary Killen of NASA's Goddard Space Flight Center in Greenbelt, Md. Recent discoveries of significant deposits of water on the moon were surprising because our moon has had a tough life. However, due to the moon's orientation to the Sun, scientists theorized that deep craters at the lunar poles would be in permanent shadow and thus extremely cold, and able to trap volatile material like water as ice if such material were somehow transported there, perhaps by comet impacts or chemical reactions with hydrogen, a major component of the solar wind. The impacts vaporized volatile material from the bottom of Cabeus crater, including water and sodium.