#5 The Four Most Powerful Types of Creative Thinking 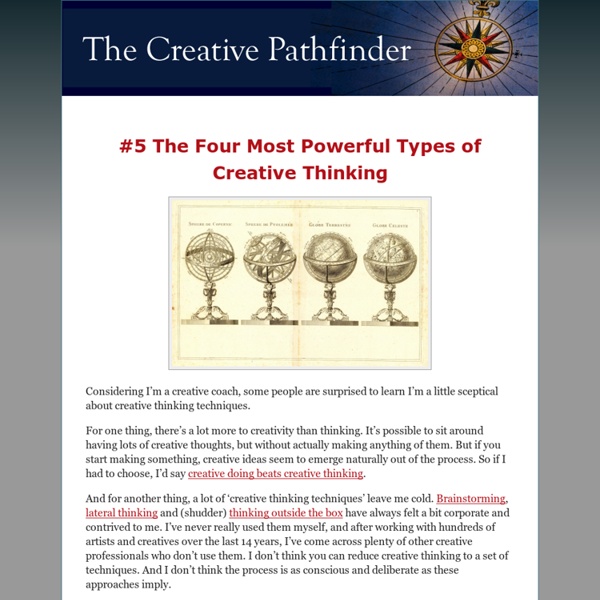 Creative Think 4 Things We Have Wrong About Creativity “Creativity” may not be the first word that comes to mind when you hear the word “conglomerate.” But Christian Stadil, CEO and co-owner of Denmark-based Thornico, a sprawling enterprise with holdings in food, technology, shipping, and others, will likely change your mind about that. Stadil is so enthusiastic about the concept of creativity that he has co-authored a new book with psychology professor Lenne Tanggaard, who teaches at the University of Aalborg in Denmark. Creativity Myth #1: You should think outside the box. Most creative breakthroughs, including ideas and products, come from well-trod areas within your own expertise, Stadil says. That kind of far-flung disconnect isn’t likely to lead to relevant new ideas. Creativity Myth #2: Big ideas come to you when you are trying to work out the problem While it may seem like breakthroughs come in a rush and tumble of ideas, true inspiration typically comes when our minds aren’t clogged with extraneous thoughts.

Musings on British Literature: 1790 to Present: Themes in The God of Small Things In The God of Small Things, there are two central themes. One of these themes is memory, or the act of forgetting, most specifically Estha’s deliberate forgetting. Related to the theme of memory is time and its different aspects: captured time and the subjectivity of time. I found Estha’s forgetting, or as he calls it, "hoovering" his mind, to be one of the most compelling themes. He does it because of one particular memory, the memory of when he told the police that Velthua kidnapped him and Rahel. The theme of time is symbolised by Rahel's plastic wristwatch that has the time "ten to two" painted on it. While the other members of the family remember "The Loss of Sophie Mol," the twins only remember the day that they "loved a man to death."

Category:Creativity Techniques This A to Z of Creativity and Innovation Techniques, provides an introduction to a range of tools and techniques for both idea generation (Creativity) and converting those ideas into reality (Innovation). Like most tools these techniques all have their good and bad points. I like to think of these creativity and innovation techniques as tools in a toolbox in much the same way as my toolbox at home for DIY. It has a saw, spanner, hammer, knife and all sorts of other things in it, they are all very useful, but you have to pick the right tool (creativity / Innovation technique) for each job. This site will try and provide a little guidance along with each tool to let you know whether it's best used for cutting paper or putting in nails. For the future, the aim is to also have sub-categories which will identify Techniques for; Problem Definition - including problem analysis, redifinition, and all aspects associated with defining the problem clearly. Subcategories

15-best-brainstorming-and-mind-mapping-tech-tools-for-every-creative-mind In order to be able to see a relationship between various ideas and information, we use mind mapping. This includes gathering thoughts, coming up with new ideas, project planning, and more to solve problems or have novel ideas. Today I compiled thea list of 15 mind-mapping tech tools that will help every creative mind be even more creative. If you like one particular tool I check out sites like Techradar, PCmag, Techriggs and CNET that have many insightful user reviews to get more information. 1. XMind is an open source tool that helps users to really understand their thinking and manage ideas. Cost: There are free accounts available but if you want to have extra features, you will have to pay as much as $79 per year. 2. Individuals and businesses can take advantage of being able to share ideas with collaborators. Cost: Free 3. This browser-based tool lets you manage everything on one convenient platform, so you can access anything quickly. 4. Cost: Free account for basic users. 5. 6. 7.

201 Ways to Arouse Your Creativity Arouse your creativity Electric flesh-arrows … traversing the body. A rainbow of color strikes the eyelids. A foam of music falls over the ears. It is the gong of the orgasm. ~ Anais Nin Creativity is like sex. I know, I know. The people I speak of are writers. Below, I’ve exposed some of their secret tips, methods, and techniques. Now, lie back, relax and take pleasure in these 201 provocative ways to arouse your creativity. Great hacks from Merlin Mann of 43 Folders

Daily Creativity Thinking like a genius: overview Thinking and recall series Problem solving: creative solutions "Even if you're not a genius, you can use the same strategies as Aristotle and Einstein to harness the power of your creative mind and better manage your future." The following strategies encourage you to think productively, rather than reproductively, in order to arrive at solutions to problems. Nine approaches to creative problem solving: Rethink! Exercise #2 illustrates how famous thinkers used these approaches. Exercise #1: illustrates applications of the nine approaches. Text of exercise:Nine approaches to creative problem solving: Rethink! Thinking and recall series Concentrating | Radical thinking | Thinking aloud/private speech | Thinking critically | Thinking critically | Thinking creatively | Mapping explanation | Make your own map I | Make your own map II | Thinking like a genius: Creative solutions | Famous thinkers | Selected thoughts

Plot Development: How to write the climax and ending of your novel. by Glen C. Strathy* Plot development is something you should think about after you have written a brief plot outline (Part 3). Many writers, especially pantsers, don't like to think about how their plot develops until they've written most of the first draft, preferring to let the ending evolve organically out of what comes before. I believe, however, that you can save yourself a lot of time and effort in the long run by making a few decisions about how your plot develops and the nature of your story early on. Of course, your ending must make emotional and logical sense. Will Your Novel End Happily, Unhappily, Or Somewhere In Between? You may find this hard to believe, but – without at all becoming formulaic – story endings generally fall into four different categories. To make the first choice, you need to know your Story Goal or Problem, which is the foundation of your novel's plot. If the answer is no, then in classical terms, your novel will be a tragedy. 1. 2. 3. 4. 1. (E.g. 2. (E.g.