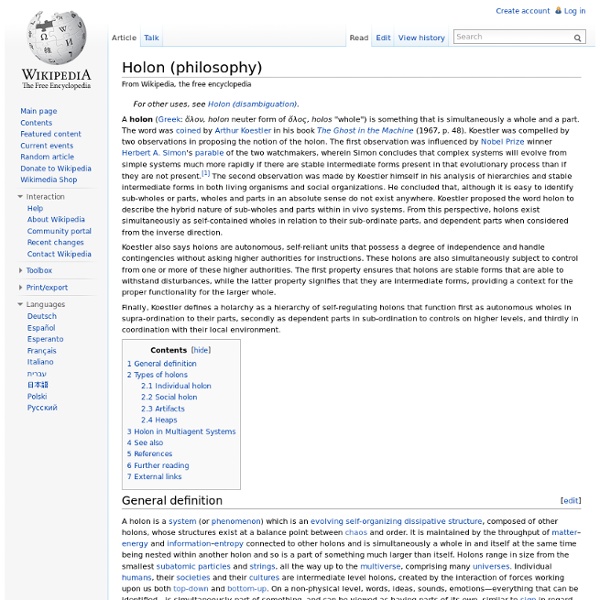 A holon (Greek: ὅλον, holon neuter form of ὅλος, holos "whole") is something that is simultaneously a whole and a part. The word was coined by Arthur Koestler in his book The Ghost in the Machine (1967, p. 48). Koestler was compelled by two observations in proposing the notion of the holon. The first observation was influenced by Nobel Prize winner Herbert A. Simon's parable of the two watchmakers, wherein Simon concludes that complex systems will evolve from simple systems much more rapidly if there are stable intermediate forms present in that evolutionary process than if they are not present.[1] The second observation was made by Koestler himself in his analysis of hierarchies and stable intermediate forms in both living organisms and social organizations. He concluded that, although it is easy to identify sub-wholes or parts, wholes and parts in an absolute sense do not exist anywhere. A hierarchy of holons is called a holarchy. Jump up ^ Simon, Herbert A. (1969).

Emptiness Emptiness (Skt. śūnyatā; Tib. སྟོང་པོ་ཉིད་, tongpa nyi; Wyl. stong pa nyid) — the absence of inherent existence in all phenomena, which was explained by the Buddha in the sutras of the second turning of the Wheel of Dharma, and further elaborated upon by masters such as Nagarjuna and Chandrakirti. Sogyal Rinpoche says: "Unfortunately, the word ‘emptiness’, which is used to translate the Sanskrit term shunyata, carries a connotation of a nothing-ness, or a void. Happily, there is a wonderful definition in Tibetan that captures its true meaning: Tib. Holarchy Different meanings[edit] David Spangler uses the term in a different meaning: "In a hierarchy, participants can be compared and evaluated on the basis of position, rank, relative power, seniority, and the like. But in a holarchy each person’s value comes from his or her individuality and uniqueness and the capacity to engage and interact with others to make the fruits of that uniqueness available

From Degrading to De-Grading March 1999 By Alfie Kohn Pour lire cet article en français, cliquer ici. The Khabs is in the Khu (This essay is also available in printed form, and you can also download the PDF.) AL I, 8 is the first verse of many we come to in The Book of the Law that frankly looks odd. “Every man and every woman is a star” we can grasp. “Be thou Hadit, my secret centre, my heart & my tongue!”

HOLONS, TRANSVERSALS and NARRATING HOLON AND TRANSORGANIZATION THEORYBy David Boje September 30, 1999, Last Revision September 8, 2000 My granddad worked one farm his whole life, worked for Pittsburgh Plate and Glass as a journeyman glass window maker for churches his whole life and stayed married to the same woman his whole life, and lived in the same community his whole life and went to the same church his whole life. His day began with the milking of cows, followed by a big breakfast of homemade bread and honey from the bees he kept. He knew who his people were and he lived a life grounded in one time and one place. Meaning of life Questions Questions about the meaning of life have been expressed in a broad variety of ways, including the following: What is the meaning of life? What's it all about? Who are we?

Theory of The Acausal Some Notes On The Theory of The Acausal In respect of the theory of the acausal, [1] the terms acausality and acausal refer to ‘acausal space and acausal time’. That is, and in the context of this theory, both terms refer to a posited continuum different from the causal continuum of observed phenomena; which causal continuum has been described in terms of a four-dimensional space-time; and knowledge of and understanding about which causal continuum can be obtained by means of sciences such as physics, astronomy, and chemistry. Essentially, therefore, acausality – as part of such a formal theory – is an axiom, a logical assumption, not a belief.

Non-Duality America Ken Wilber Integral Transformation Tami Simon speaks with Ken Wilber, in the first of a two-part series. Ken is one of the most influential and widely read American philosophers of our time. Subscribe Subscribe With a subscription to Philosophy Now you can save up to 30% off the newsstand price, have your copies delivered to your door and enjoy unrestricted access to our online content. Institutional customers Information is not a difference (And he would have been rather silly if he had.) Aaron Sloman School of Computer Science, The University of Birmingham, UK This file is Also available as a PDF file (derived from HTML): Installed: 22 Jan 2011 Last updated: 24 Jan 2011; Reformatted May 2015; minor changes Apr 2016

You are the river: An interview with Ken Wilber Ken Wilber may be the most important living philosopher you’ve never heard of. He’s written dozens of books but you’d be hard-pressed to find his name in a mainstream magazine. Still, Wilber has a passionate — almost cultlike — following in certain circles, as well as some famous fans. Bill Clinton and Al Gore have praised Wilber’s books. Deepak Chopra calls him “one of the most important pioneers in the field of consciousness.” And the Wachowski brothers asked Wilber, along with Cornel West, to record the commentary for the DVDs of their “Matrix” movies. how a vegas magician and an ex-nasa scientist s... - Nutritional Yeast: How a Magician and an Ex-NASA Scientist Saved My Life - Quora sick I woke up in the middle of the night, choking. I stood over the sink, coughing and spitting. It was 20 minutes before I could breath naturally without coughing or gagging, at which point I slinked back to bed and lay down next to my concerned wife. This had been happening almost every night, sometimes twice a night, but, like and idiot, I refused to see a doctor.

One Tool Among Many: The Place of Vipassana in Buddhist Practice What exactly is vipassana? Almost any book on early Buddhist meditation will tell you that the Buddha taught two types of meditation: samatha and vipassana. Samatha, which means tranquillity, is said to be a method fostering strong states of mental absorption, called jhana. Vipassana — literally "clear-seeing," but more often translated as insight meditation — is said to be a method using a modicum of tranquillity to foster moment-to-moment mindfulness of the inconstancy of events as they are directly experienced in the present. This mindfulness creates a sense of dispassion toward all events, thus leading the mind to release from suffering. These two methods are quite separate, we're told, and of the two, vipassana is the distinctive Buddhist contribution to meditative science.