How To: Self-Watering Seed Starter Pots 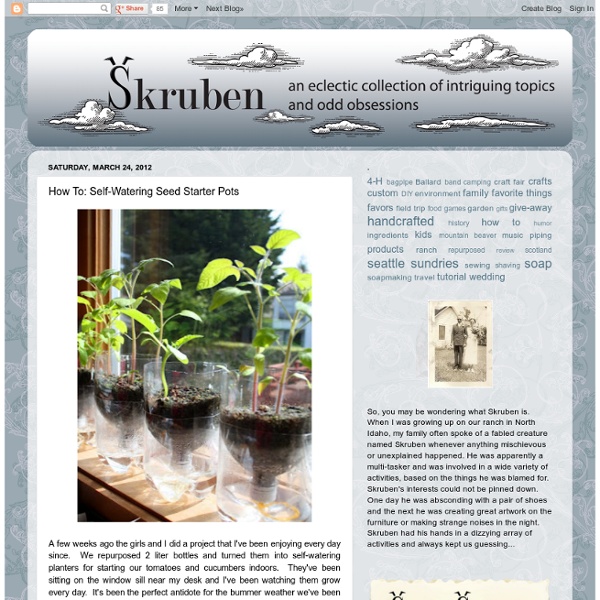 A few weeks ago the girls and I did a project that I've been enjoying every day since. We repurposed 2 liter bottles and turned them into self-watering planters for starting our tomatoes and cucumbers indoors. They've been sitting on the window sill near my desk and I've been watching them grow every day. It's been the perfect antidote for the bummer weather we've been having here in Seattle. I've tried starting seeds indoors several different ways over the years. So far this is my favorite method because the soil is always exactly the right moisture level and it's very easy to see with the naked eye when it's time to add water to the planter.

Ten Mistakes New Herb Gardeners Make (and How to Avoid Them!) So you're thinking of herb gardening, or maybe you tried it last year and it was an utter disaster? Have no fear. There are a few simple mistakes that many herb newbies make (and I know, because I made most of 'em myself). Master these simple and practical tips for herb gardening and you'll be using your own fresh herbs like Mario Batali in no time. Fresh herbs are one of the greatest ways to increase the taste of your food healthfully. DIY: Water-Bottle-Cascade-Chandelier Dou you know Water Bottle?? Yes way! Michelle Brand, an eco-designer from Manchester in the UK, repurposes the bottoms of discarded plastic soda bottles to create these breathtakingly beautiful decorative light fixtures, lamp shades, curtains, room dividers, and more. Ingenious and quite stunning, don’t you agree

How to get Superpowered Garden Soil Ya’ know what makes me happy? Dirt. I’m not talkin’ about crappy dirt on the side of the road, I’m talkin’ about real, dark, rich & moist dirt. The kind you can dig your fingers into. The kind that when you kneel on it, feels soft and squishy. 66 Things You Can Grow In Containers Growing your own food is exciting, not only because you get to see things grow from nothing into ready-to-eat fruits and veggies, but you also don't have to worry about the pesticides they might contain, and you definitely cut down on the miles they -- and you -- have to travel. As it turns out, with pretty minimal effort, anyone can be a gardener. My boyfriend and I are essentially first-timers this season and so far have the beginnings of strawberries peeking out, tomatoes are on their way, the basil's about ready for a big batch of pesto, and once the last frost hits, the peppers, kale, spinach, chard, and mesclun will be on their way, too. All on a tiiiny little terrace (with the help of a little DIY carpentry). If you're up to the challenge -- and it really isn't much of one -- growing your own food can be so rewarding. And so much cheaper!

Milkcrate Composter (vertically stacked) How to make a vertically stacked composter using milkcrates. This instructable is based on Terracotta home composter by artworker and the creators of the terracotta composter, Daily Dump ( ) When I saw the terracotta composter, I though it was the most brilliant composter I have ever seen. FamilyFun April 2011 This photo originally appeared in FamilyFun Magazine Total Time 1 to 2 hours Ages school-age Colored with markers and baked into permanent coils, these plastic bottle beads are reminiscent of colored glass. by IDEA BY KRIS BORDESSA What you'll need

Episode 322: NYC Rooftop Farms Sunflowers at Brooklyn Grange, Rooftop Farm in Queens NYC New York City is considered the most densely populated city in America. With over 8 million mouths to feed, it’s no surprise that some are looking for new ways to provide high-quality, locally-grown produce within city limits. What IS a surprise is that they are looking to grow that produce UP – on building rooftops instead of in fields! How To Use Diapers To Create Super Growing Potting Soil - One of the most difficult gardening tasks is managing the water your plants receive. You can easily and cheaply provide the “perfect” mix of soil and water to your plants by taking advantage of diapers amazing absorbency. Filling a diaper with water to its capacity and mixing with fresh soil produces one of the best potting mixes available, full of water and oxygen and nutrients, everything a healthy plant needs. Learn more about using the super-absorbent power of diapers with plants in the video below:

Plastic Bottle Beads I found a great tutorial for plastic bottle beads on ThreadBanger via Waiting for Wonderland. The beads were very easy and quick to make. I made them a little different than the directions by adding washi paper to them. All Praise To Barack Obama For Stiffing The War Party—- Peace Is Finally Being Given A Chance I have rarely found anything President Obama has done to be praiseworthy, and believe his domestic policies of Keynesian borrow and spend and incessant statist intervention in capitalist enterprise to be especially deplorable. But finally he has stood up to the War Party——and that could mark a decisive turning point in rolling back Washington’s destructive interventionism and imperial pretensions in the Middle East and, indeed, around the world. The Iranian nuclear agreement is a decisive refutation of the War Party’s hoary claim that Iran is hell-bent upon obtaining nuclear weapons. This deafening but untruthful narrative was long ago debunked by the 2007 National Intelligence Estimates (NIEs). These authoritative findings were issued by the nation’s 16 top intelligence agencies in November 2007, and they held that what had possibly been a small-scale Iranian weapons research effort was abandoned in 2003 and never restarted.

How to Turn the Bottom of a Plastic Bottle into Flowers! You have used a portion of a plastic bottle for something (maybe an Inverted Planter perhaps) and you dont really want to waste the bottom of the bottle... Never fear, here's what you do. Cut around the bottom grooves so that you have one piece that looks kinda like a flower.