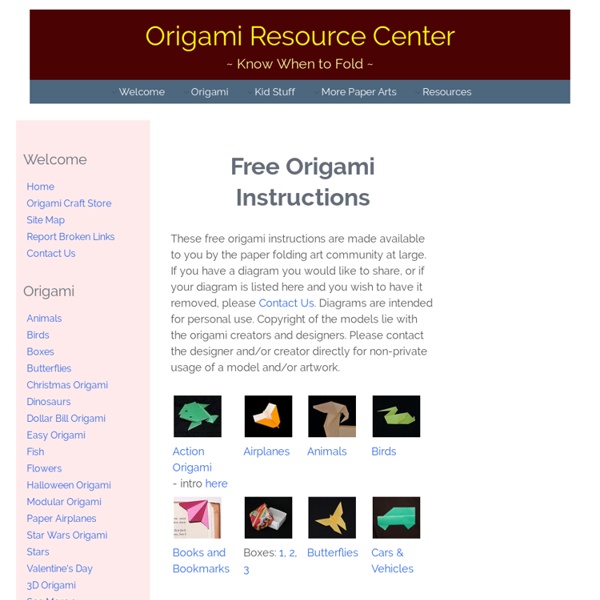 These free origami instructions are made available to you by the paper folding art community at large. If you have a diagram you would like to share, or if your diagram is listed here and you wish to have it removed, please Contact Us. Diagrams are intended for personal use. Copyright of the models lie with the origami creators and designers. Please contact the designer and/or creator directly for non-private usage of a model and/or artwork. Free Origami Instructions : Holiday Folds: Valentine's DaySt Patrick's DayEaster HalloweenChristmas Origamitrees santawreaths ornamentsangelssnowmensilly stuff

30 Cool Things to Make With Old Magazines Are you someone who’s been hanging onto old copies Vogue, Domino, Harper’s Bazaar, and Vanity Fair, only to realize you’re basically running out of magazine storage room? Us too. That’s why we’re all about finding new ways to reuse our stacks of fashion magazines to make cool new things. MORE: 50 Simple Ways to be More Eco-Friendly Now Pinterest, obviously, is a wealth of genius DIY information, so we’ve compiled 30 of the coolest things you can make using your old glossies. Whether it’s a a set of notecards or a chic print for your gallery wall, there’s something here that even the least crafty gal can master.

Stained Glass Flower Kids Craft {Tutorial} A Tutorial! Yay! It's about time, right? Stained glass flower crafts are so classic. I love them. I had never done any with my students before and the day before spring break I determined that it was high time. Review: "Origami Sequence" by Quentin Trollip Origami Sequence Quentin Trollip Hardcover 176 pages Complex English and French ISBN 2-84424-080-1 $59.00Buy it from The Origami Source! This is Quentin Trollip’s second book, the first being Quentin Trollip – Selected Works that was published in 2008 by the British Origami Society. If you have folded any of his models or had a chance to see them, you know he has a great eye for detail. I do not own a copy of said BOS booklet and had only folded Trollip's manta ray and pig prior to my purchase of Origami Sequence.

Paper Flowers – Anyone Can Do That Japanese Kusudama, this tutorial is featured on Craftuts Anyone can do that, I assure you. The proof: I can, just take a quick look at my result below. Učenje o osjećajima Learn about emotions with this DIY toy with changing faces, made with cardboard and a few fasteners. You can create hundreds of facial expressions! How to make your ‘Make a Face’ DIY Emotion TOY Origami Diagrams for Download These pages present diagrams that may be freely downloaded and used for personal enjoyment. While "traditional" origami models are in the public domain, the vast majority of published origami designs are of recent authorship and therefore cannot be published or used commercially without obtaining permission from their creators and/or diagrammers. OrigamiUSA is very concerned about protecting and respecting the rights of origami artists, authors, and diagrammers: please see our copyright page for more details. For all of the downloadable diagrams here, in general, the following applies: the work is protected by copyrightboth the creator (if not ‘Traditional’) and the diagrammer have rights in the workthis version of the work is being distributed by OrigamiUSA with permission, for personal use onlyyou may not redistribute it without permission from the relevant copyright-holdersfor redistribution or commercial usage, please contact us at copyright@origamiusa.org.

Make your own jellyfish in a bottle. ~ Note for Thai fans ~ เป็นโพสเก่าที่มีแฟนบล๊อกจากต่างประเทศขอมาให้เขียนเป็นภาษาอังกฤษนะคะส่วนแฟนบล็อกที่ยังไม่เคยอ่านเรื่องนี้เลย ฉบับภาษาไทยดูที่นี่ค่ะ The other day, while I was thinking to get something to put in the water bottle for Bhoom to shake for fun. I saw a plastic grocery bag next to me and then this idea popped up. Saznajte s igrati kod kuće: Playdough cvijet Mat. Besplatno ispis. Razigrani matematike. Welcome back to the "Playful Maths" series brought to you by Together, let's make MATHS FUN! This weeks Playful Maths Activities use the sensory material Play dough. In this activity we are focusing on numbers, counting & addition. Origami Diagrams Folding Help: How to Divide a square or rectangle into 3rds, 5ths or 7ths is here. How to cut a Pentagon from a square is here.

Craft DIY Projects, Patterns, How-tos, Fashion, Recipes @ Craftzine.com - Felting, Sewing, Knitting, Crocheting, Home & More Quilling, the coiling and shaping of narrow paper strips to create a design, has been around for years — hundreds, in fact. During the Renaissance, nuns and monks would roll gold-gilded paper remnants trimmed during the bookmaking process, and use them to decorate religious objects as an alternative to costly gold filigree. Quilling later became a pastime of 18th and 19th century young ladies in England, who would decorate tea caddies and pieces of furniture with paper filigree. The practice crossed the Atlantic with colonists, who added quilling to candle sconces and trays as home decorations. Kids Craft Blog by PlaidOnline.com - Monday Funday: Frog Prince Valentine Card Holder April 11 2014 Win a $100 Gift Card to Walmart Plus Craft Supplies You can now find a rainbow of colors of our Apple Barrel® Acrylic Craft Paint in store at Walmart, and to celebrate, it's your chance to win a $100 Walmart Gift Card PLUS $100 worth of craft suppl... [More] April 10 2014

Origami Diagrams I thought of sharing some of the diagrams I have been collecting over the last few months from various websites. These are available freely over the Internet and are mostly in the PDF format. I still haven’t gotten around to folding most of these as yet. Plastic Bag Lamp Some of you may remember the plastic bag lampshade I made last year. This new lamp is very similar to that lampshade, and it's mostly an experiment I did to try a different structure that came up to my mind. I didn't like the paper mache structure I made for the previous one and I believe that this new version is actually better and faster to make.