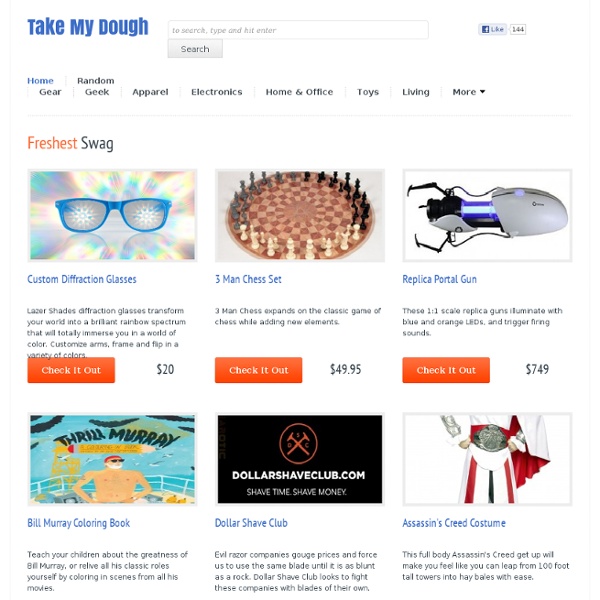 Your Daily Life in GIFs (1.23.12) Good news, everyone…Your Daily Life in GIFs has been upgraded to WEEKLY STATUS! Yep, so come back every Monday for even more totally relatable moments… (also: if you want to share a specific one, just click the image and you’ll be taken to a single-pic page) When your favorite TV series ends: When you see someone leave the restroom without washing his/her hands: When someone catches you in a lie: When you start to tell a story, but then realize no one is listening: Photos: Rufus Wainwright at the Montreal International Jazz Festival Sunny MontréalDetailed Forecast Montreal Gazette Quick Links: Shopping, Obituaries, Horoscopes Extrove - Cool Stuff, Gifts and Gadgets for Men We admit that guys can be a little difficult to give gifts to. So here we’ve compiled all the cool gadgets, toys, gear and stuff that you can give to the significant man in your life. However we are not saying that all the stuff in the list are cheap. Steve Jobs iPhone Case in Carbonite Facebook Like Button Coat Hanger Aquaskipper

Oh, So That's What That Really Means (13 Pics) - StumbleUpon November 7, 2011 | 44 Comments » | Topics: LOL, Pics (via) Hot Stories From Around The Web The Oatmeal and FunnyJunk legal dispute A legal dispute between webcomic The Oatmeal and FunnyJunk, a content aggregator website, began in 2011.[1][2] The Oatmeal creator Matthew Inman alleged in 2011 that FunnyJunk users repeatedly infringed copyright of The Oatmeal's original content. In June 2012, FunnyJunk's lawyer, Charles Carreon, sent Inman a letter demanding US$20,000 in damages from him, alleging the claims he made were defamatory. Inman responded by publishing the letter on his site, along with a response and announcement that he would be organizing a charity fundraiser through Indiegogo, donating the amount demanded by Carreon to the American Cancer Society and the National Wildlife Federation.

Unique Gifts for the Home Categories By Price By Tags The Incredible Gift Guide Despicable Me 2 Teaser And Poster Released Universal has released the teaser poster and trailer for Despicable Me 2. Neither of the two divulge any plot details, or even has footage of the film for that matter. This is to be expected, as the film doesn’t even open until July 3, 2013.

Kris Gethin - Your Trainer And Partner For The Next 12 Weeks! - Bodybuilding.com Quick Navigation Transform Your Life With Kris Gethin! Kris Gethin trains you and trains with you during his 12 week transformation program - burn fat and build muscle to sculpt your ideal physique! Amazon Promotional Codes Or Amazon Discount Code You can Get Amazon is the biggest selection of books, DVDs, electronics, computers, apparel and anything else on the earth. When we shopping on Amazon, we are always looking for best deals and amazon coupon codes to help us saving money. To help you guys out, Deals Mother works hard to find best amazon coupons codes and deals for you.

mental_floss Blog & 11 Pencil Vs. Camera Images - StumbleUpon 986 653Share10.7K Born in Abidjan, Ivory Coast and now living in Belgium, Ben Heine is an amazing artist who overlaps hand-drawn works of art with photos to create stunning images. I selected eleven of his Pencil Vs. Camera images from his site, but you should check out all his awesome work if you have time. The Oatmeal vs. FunnyJunk: webcomic copyright fight gets personal Matthew Inman never wanted to be a hardass. He just wanted to write his unique webcomic, The Oatmeal, but only months after he started the project, he began to see his work showing up—often with all attribution stripped out—on user-generated content sites like FunnyJunk.com. He would e-mail site administrators asking them to remove his work, which they did, but users would immediately upload it once more. Playing copyright policeman wasn't worth the time to talk, so Inman “just kind of ignored it for a year,” he told me… until he couldn't ignore it anymore. His readers kept e-mailing him, pointing out the wholesale copying of his work. Eventually, Inman looked into FunnyJunk more carefully.

Amazon discount codes at ProBargainHunter.com Ever since I wrote about Amazon shopping tips and hacks last November the article has been the most visited page on ProBargainHunter. In case you missed it -- the post describes how you can browse discounted merchandise on Amazon (by messing around with the URL's) and lists a few other useful tips. The article featured on LifeHacker and Consumerist and even prompted some people to create tools for easy URL building.

Bizarre Websites On Which You Can Kill Time With Style - Smashing Magazine - StumbleUpon Modern Web-building technologies allow designers to realize their most daring and creative ideas. Enhanced interactivity and a remarkable visual appearance can be achieved by means of such tools as Flash, JavaScript and Papervision3D, to name just a few. These strengths usually impress and entertain visitors and thus are often used for conceptual artistic presentations and promotional campaigns. In this post, you’ll find a collection of amusing websites that, by combining unconventional (and sometimes bizarre) ideas and clever JavaScript and Flash effects, will entice you to play on them for an embarrassing long time.