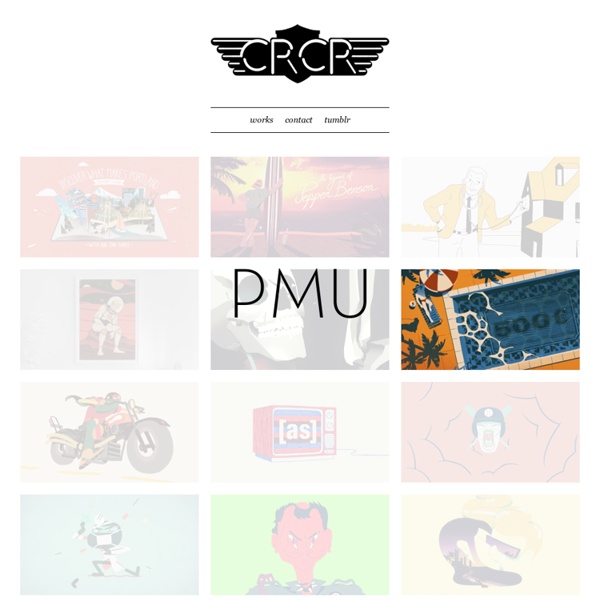 Shelters resembling giant pompoms warm skaters on a frozen river Canadian firm RAW Design has created a series of shelters that look like giant pompoms to keep skaters warm on a frozen river in Winnipeg (+ slideshow). RAW Design was awarded a spot in the annual Winnipeg Warming Hut competition with their unusual design, called Nuzzles. Made from a geodesic mesh of hollow aluminium tubing and an outer layer of foam bristles - the floats you play with in swimming pools - the Nuzzles provide an inner layer of still air to keep skaters warm. Aaron Hendershott, one of the designers from RAW Design told Dezeen: "The event organisers were enthusiastic about the design as it challenged the already diverse interpretations of what a warming hut could be." Inspired by the insulating properties of fur, the designs also glow at night.

Roman Muradov View high resolution This was made for Facegasm/CALA which I won’t be attending in person due to an immense fatigue that has been ruining my life & work for the last year or so, particularly recently. Probably this old thing that I’ve been neglecting for a decade. TateShots: Kusama's Obliteration Room At the start of the project, this room was completely white – white ceiling, white floor, white walls, white furniture. People come in, they are given a sheet of coloured stickers in different sizes, which have been produced specially for the project and in accordance with the artist’s specifications; her choice of colour, her choice of finish, and her choice of size. And then everybody is invited to place the stickers anywhere they like in the room, according to any pattern, any idea they have, anything they like they can do with the stickers. Kusama is best known for her brilliantly coloured dotted surfaces, her installations with blow-ups and her walls covered in brilliant spots. And in her biography, she talks about experiences really of a very young child, almost sort of hallucinogenic experiences, where her vision of landscape and people was clouded by spots. It’s her way of kind of covering the surface.

www.sitepoint.com/30-creative-commons-sources/ This article was written in 2009 and remains one of our most popular posts. If you’re keen to learn more about online tools, you may find this recent article on Google Analytics apps of great interest. In this day and age, it seems everything online has a price associated with it. Whether you’re subscribing to a pay site for full articles or clicking on ads in a blog, everything online seems to have money associated with it. Luckily there is still a large, and very healthy, movement online for media files listed under the Creative Commons licenses. 20 Awesome Free Brush Fonts Resources April 19, 2013 Nothing can surpass the artistic quality of hand made works. Every stroke made by one’s hand using instruments such as a brush creates a different artistic style with natural look and feel.

ELIOLI Art Anonymous asked: Hi! I love your art and its style(s) and what you've done for VeggieTales. You obviously know the new looks have gotten backlash, but they're truely wonderful. And to be honest, it must have been hard to interpret 2D art into 3D models. Now, what I wanted to ask was I know you ladies don't do requests but, I really want to see how you two inturpret the rest of the VeggieTales cast. I'm an aspiring artist and want to see how you draw the rest of the veggies in the new designs. Atmosphere Clouds Photography L’artiste italien Raffaello De Vito a endossé le rôle de créateur de nuages dans sa série « Atmosphere – Clouds », réunissant des petits nuages suspendus, faits en coton ouaté et coincés sous verre, parfois grisâtres ou immaculés. Sa série complète est à découvrir en images, dans la galerie.