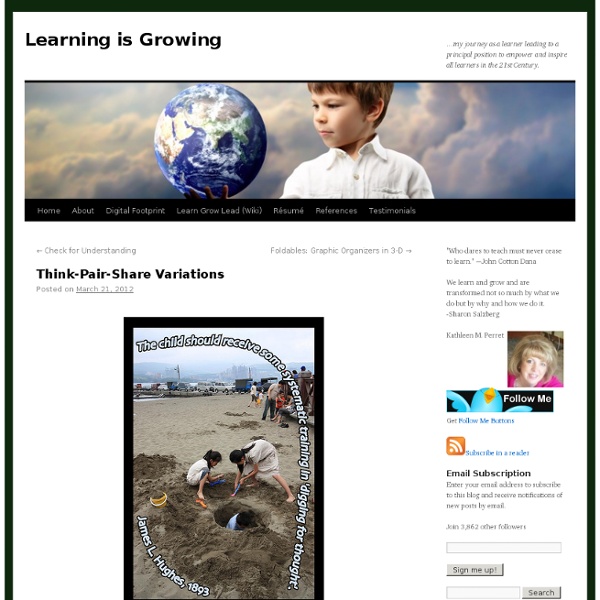 Learning is a collaborative venture. The more we can provide opportunities for our students to think, collaborate and learn from each other – the more we are preparing them for their futures! Do you use the strategy Think-Pair-Share in your classroom? The Think-Pair-Share strategy is a three-step collaborative learning structure developed by Dr. Frank Lyman in 1981. It is a relatively low-risk and is ideally suited for instructors and students who are new to collaborative learning. The General Strategy: Think-Pair-Share – Teacher asks a question or provides a prompt.Students are given time to THINK about their responses.Students PAIR up and discuss their responses.Student pairs SHARE their ideas with a larger group. Do you want to spice it up with additional variations? The strategy Think-Pair-Share, along with a variety of twists, is a versatile strategy that can be used before, during or after a reading, viewing or listening activity. Formulate-Share-Listen-Create - Mix-Pair-Share –

Think, Pair, Share Think, Pair, Share Think, Pair, Share is a structure first developed by Professor Frank Lyman at the University of Maryland in 1981 and adopted by many writers in the field of co-operative learning since then. It introduces into the peer interaction element of co-operative learning the idea of ‘wait or think’ time, which has been demonstrated to be a powerful factor in improving student responses to questions. It is a simple strategy, effective from early childhood through all subsequent phases of education to tertiary and beyond. It is a very versatile structure, which has been adapted and used, in an endless number of ways. Processing information, communication, developing thinking. Sharing information, listening, asking questions, summarising others’ ideas, paraphrasing. Teacher poses a problem or asks an open-ended question to which there may be a variety of answers. Positive interdependence The students are able to learn from each other Individual accountability Equal participation

The A-Z Dictionary of Educational Twitter Hashtags Whether you’re a new or seasoned Twitter user, you likely come across confusing hashtags that probably look like a bunch of nonsense. First, What’s A Hashtag? The # symbol, called a hashtag, is used to mark keyword or topic in a Tweet. Any Twitter user can categorize or follow topics with hashtags.Those hashtags (usually) mean something and are a great way to get a tweet to appear in search results or discussion monitoring. For example, the popular #edchat hashtag is used by thousands of users every Tuesday. It makes it easy (sort of) for people to monitor what’s happening in the conversation rather than having to try and guess what topics you should search for. How To Hide Your Hashtag Chat From Followers When having a Twitter #hashtag chat, if you want to avoid overwhelming your followers, start any tweet you want to “hide” with @HideChat or (one character shorter) @HideTag . You don’t need to do this with all your chat tweets (though you could). Sources The Most Popular Hashtags

What To Do When A Student Refuses To Go To Time-Out When a student refuses to go to time-out, he (or she) often has a good reason. This doesn’t mean he isn’t responsible for making such a decision. He is—completely and fully. For it’s never okay to defy a teacher’s direction. But in his mind he feels like he must take a stand. In other words, there is something about the situation or incident that doesn’t sit right with him. So before answering what to do, it’s important we unpack why a student would refuse to go to time-out. You see, difficult students in particular have an acute sense of fairness. In fact, defiant behavior would be expected in such a classroom. What follows are four reasons why a student would refuse to go to time-out. 1. If a student breaks a classroom rule, but doesn’t believe he did anything wrong, then there is a good chance he’ll become defiant. 2. If ever you let misbehavior go without a consequence, you’re asking for trouble. And so when you send them to time-out, it’s only natural to get resistance. 3. 4.