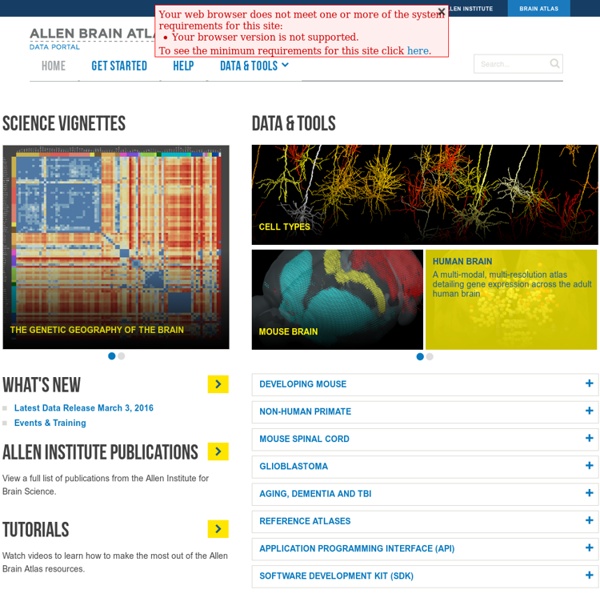 Related:  The human brain and the mind • Neurofisiología

An afternoon nap markedly boosts the brain’s learning capacity If you see a student dozing in the library or a co-worker catching 40 winks in her cubicle, don’t roll your eyes. New research from the University of California, Berkeley, shows that an hour’s nap can dramatically boost and restore your brain power. Indeed, the findings suggest that a biphasic sleep schedule not only refreshes the mind, but can make you smarter. Students who napped (green column) did markedly better in memorizing tests than their no-nap counterparts.

Open Access Maps at NYPL The Lionel Pincus & Princess Firyal Map Division is very proud to announce the release of more than 20,000 cartographic works as high resolution downloads. We believe these maps have no known US copyright restrictions.* To the extent that some jurisdictions grant NYPL an additional copyright in the digital reproductions of these maps, NYPL is distributing these images under a Creative Commons CC0 1.0 Universal Public Domain Dedication. The maps can be viewed through the New York Public Library’s Digital Collections page, and downloaded (!) World Sound Healing Day Free Download The “AH TRAINING WAVE” by Jonathan Goldman This recording was created by world renowned Healing Sounds pioneer Jonathan Goldman. It is approximately five minutes long and was designed to be utilized by those who wish to participate in World Sound Healing Day as well as other global toning events.

Sequencing the Connectome Converting connectivity into a sequencing problem can be broken down conceptually into three components. (A) Label each neuron with a unique sequence of nucleotides — a DNA “barcode.” (B) Associate barcodes from synaptically connected neurons with one another, so that each neuron can be thought of as a “bag of barcodes” — copies of its own “host” barcode and copies of “invader” barcodes from synaptic partners. (C) Join host and invader barcodes into barcode pairs. These pairs can be subjected to high-throughput sequencing. The Brain's Dark Energy Imagine you are almost dozing in a lounge chair outside, with a magazine on your lap. Suddenly, a fly lands on your arm. You grab the magazine and swat at the insect.

NOS Special Projects - NOAA Historical Shoreline Survey Viewer What is a Shoreline Survey? Shoreline surveys (also called coastal surveys, T-Sheets or TP-Sheets, and shoreline manuscripts) refer to topographic sheets compiled from maps derived in the field with a plane table, in the office from aerial photos, or a combination of the two methods. These shoreline surveys are the authoritative definition of the U.S. high-water line and may also include details such as roads, prominent buildings, and other features along the coast. The surveys were used as base maps to construct nautical charts primarily used for navigation. The NOAA Historical Shoreline Survey Viewer Survey from 1885 for Dana Point, CA

Arimidex first-line treatment for breast cancer in postmenopausal women Arimidex is a front-line treatment for postmenopausal breast cancer in women, slowing its growth in advanced stages and treating the spread of the disease to other parts of the body. Arimidex is also able to increase testosterone levels in men, by reducing excess estrogen in the body. Arimidex breast cancer treatment combats the kind of breast cancer that thrives on estrogen. It is an adjuvant therapy, in other words it is used in addition to primary treatment to reduce the risk of postmenopausal breast cancer returning. 70,000+ Have Played ‘Eyewire’ Game That Trains Computers To Map the Brain Your connectome, the map of all 86 billion connected neurons in your brain, is hopelessly complex. In fact, one human connectome has a staggering 10,000 times that number of neural pathways. Every thought you have and every memory you hold exists in your connectome, and major efforts are under way to map it. The good news is that you don’t need a fancy neuroscience degree to help out. In fact, the fancy degreed neuroscientists are hoping that you might pitch in. Created by scientists at MIT, Eyewire is a browser game that lets players take on the challenge of mapping neural pathways in brains — no scientific background required.

Is the Internet Warping Our Brains? - Technology Is this a bad thing? Not necessarily, says Sparrow. For instance, for years people in the educational community have known that rote learning—that is, forcing children to memorize facts and dates—is a poor way to educate. If that's the case, allowing computers to do some of the memorizing for us might be a way to focus more on the more philosophical aspects of learning. "Perhaps those who teach in any context, be they college professors, doctors or business leaders, will become increasingly focused on imparting greater understanding of ideas and ways of thinking, and less focused on memorization," Sparrow told Time.

Enduring Voices Project, Endangered Languages, Map, Facts, Photos, Videos Explore Talking Dictionaries The Enduring Voices team is pleased to present these Talking Dictionaries, giving listeners around the world a chance to hear some of the most little-known sounds of human speech. Several communities are now offering the online record of their language to be shared by any interested person around the world. While you probably won't walk away from these Talking Dictionaries knowing how to speak a new language, you will encounter fascinating and beautiful sounds--forms of human speech you've never heard before--and through them, get a further glimpse into the rich diversity of culture and experience that humans have created in every part of the globe. Explore the Talking Dictionaries for yourself. Losing Our World's Languages

Related:
Related:  The human brain and the mind   -  Neurofisiología