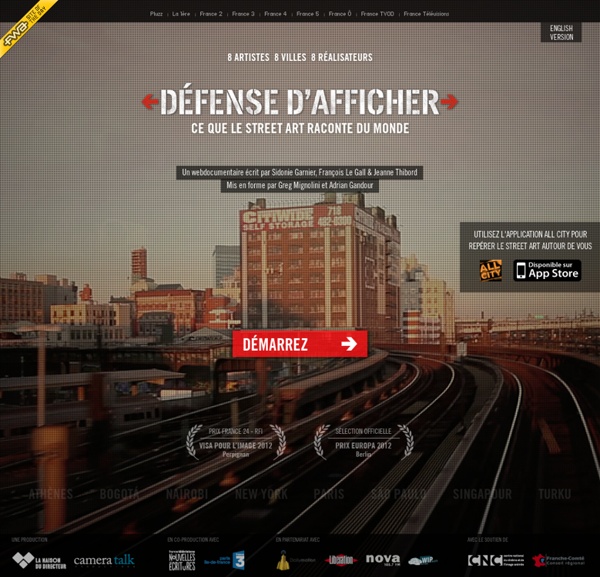 Locust Swarm Image, Madagascar October 15, 2014 Photograph by Pete McBride At 16,700 feet and a temperature of minus 20ºF, Jake Norton (right) and Dave Morton eat a quick dinner under moonlight as they prepare to climb the unclimbed Chaukhamba IV looming behind them. Along with photographer Pete McBride, the climbers spent 45 days trekking every mile of the Ganges River. McBride’s source-to-sea expedition, following the length of the Ganges River, was recently featured on our photography blog, Proof. See more pictures and read McBride's dispatch from the start of his journey high in the Himalaya. Before I Die What matters most to you Interactive public art project that invites people to share their personal aspirations in public. After losing someone she loved and falling into depression, Chang created this experiment on an abandoned house in her neighborhood to create an anonymous place to help restore perspective and share intimately with her neighbors.

REVOLVE: the versatile, portable and affordable camera dolly by Jeremy Canterbury Missed the Kickstarter? No problem! You can still order the Revolve at our website www.revolvecamera.com Like us and follow us on Facebook for updates, and future projects! Digital Trends- "...Get those smooth video shots with the Revolve dolly ... a low-cost, modular alternative to more conventional camera equipment" Paul Klein (art activist) Paul Klein (born 1946) is an American art dealer. He was chosen 2006 Man of the Year by the Chicago Society of Artists.[1] Klein works for the Briddge Group providing financial and legacy planning for collectors. He was the first executive director of the Chicago ART Project.[2] From 2004-2008 he was the art curator for the 2,500,000-square-foot (230,000 m2) expansion of McCormick Place,[3] the editor of ArtLetter,[1] and wrote for "Chicago Life" which was distributed regionally in the New York Times.

Stik New Mural In London Inspired by the old master paintings in the Dulwich Picture Gallery, British superstar Stik just completed a new mural in Dulwich, South London. Stik painted his version of The Guardian Angel by Marcantonio Francheschini, he will be reinterpreting more of these paintings in his own style on walls and garage doors in Dulwich the week before the Festival. If you are in London, Stik will be leading a walk around his Dulwich pieces on Saturday May 19th at 2.30pm starting at Push Studios, Blackwater Court, Blackwater Street and ending at Dulwich Picture Gallery. Street Art Utopia's Best of 2011 I couldn’t help but direct everyone to fellow public art loving blog Street Art Utopia as they have compiled a pretty decent list of the best street art of 2011. If you are just getting into the wonderful world of pasting, spraying or making the streets a more creative place, this list is a great place to start (short of Wall and Piece). One of the best things about this genre is it’s diversity – you can decided what you find gimmicky/twee or meaningful and awe-inspiring. Street art has always been the public’s voice, and the art world has yielded success to those with great ideas and a call for change. More from the list after the jump!

The Basics It's been thirteen years since we started Odopod. We've always wanted one thing: to do the best work of our lives. Along the way, we have been joined by an eclectic and exceptionally talented bunch of people who wanted the same thing. Together, we've built a company we love. Artivist Film Festival & Awards The Artivist Film Festival & Awards is an international film festival and awards ceremony dedicated to recognizing activist efforts of filmmakers, specifically in the areas of human rights, child advocacy, environmental preservation, and animal rights.[1] Background[edit] The Festival is held annually and tours internationally. Its mission is to strengthen the voice of activist/artists ("artivists"), while raising awareness for global causes.[2] The festival is produced by Artivist Collective, a nonprofit organization founded in August 2003 by Diaky Diaz, Bettina Wolff, and Christopher Riedesel.[3] The first Artivist Film & Awards Festival was held April 27, 2007 at Hollywood's Egyptian Theater.