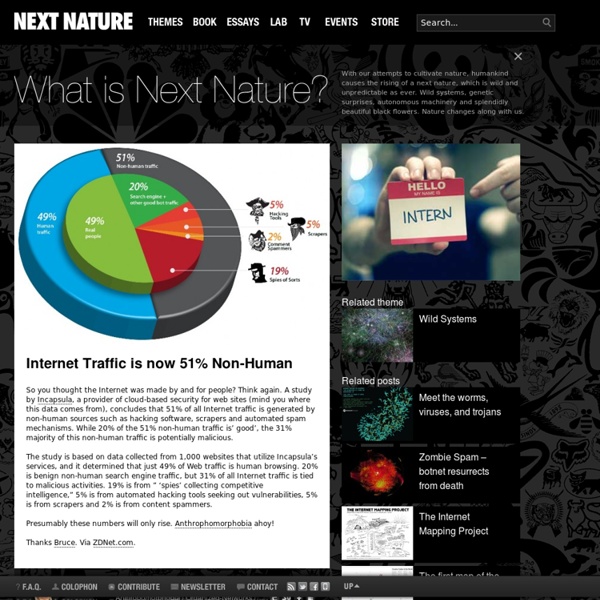 So you thought the Internet was made by and for people? Think again. A study by Incapsula, a provider of cloud-based security for web sites (mind you where this data comes from), concludes that 51% of all Internet traffic is generated by non-human sources such as hacking software, scrapers and automated spam mechanisms. While 20% of the 51% non-human traffic is’ good’, the 31% majority of this non-human traffic is potentially malicious. The study is based on data collected from 1,000 websites that utilize Incapsula’s services, and it determined that just 49% of Web traffic is human browsing. 20% is benign non-human search engine traffic, but 31% of all Internet traffic is tied to malicious activities. 19% is from ” ‘spies’ collecting competitive intelligence,” 5% is from automated hacking tools seeking out vulnerabilities, 5% is from scrapers and 2% is from content spammers. Presumably these numbers will only rise. Thanks Bruce.

Seven startup sins to avoid I've seen thousands of startups fail, but they almost always fail for the same reasons. Most entrepreneurs fall into the same traps over and over again, despite how easy they are to avoid. At the London Web Summit earlier this week, I told an audience of European entrepreneurs the seven mistakes I believe most often destroy promising startups. The 50 Most Popular Web Design Blog Posts, Resources & Cheat Sheets of 2007 Basics & Principles 9 Essential Design Principles - PSDtuts, known for its Photoshop tutorials, gives us a nice list of basic design principles that can be applied to many different media types, but are often lost in amateur web design. The Importance of White space - One of the oldest principals of design is white space, and knowing how to use it properly could mean wonders for your design. Popular site A List Apart tackles the subject. 8 Design Tactics to Help You When You're Stuck -Every designer goes through hard times of "designer's block"; Matt Inman (also known as "Oatmeal") gives us 8 tactics to help you get back to work. 10 Great Website Redesigns of 2007 - How better to enhance your design abilities then to learn from the mistakes of those in the past?

15 Coolest Photos You Won't Believe Are Not Photoshopped Dean Potter's most recent solo walk at Taft Point in Yosemite by Photographer Jeff Cunningham. Sleeping on Heaven. Apparently, the model was just jumping! (The left-hand side is a mirror, and the right-hand side is clear glass, with another girl standing on the other side). Four Destructive Myths Most Companies Still Live By - Tony Schwartz by Tony Schwartz | 11:17 AM November 1, 2011 Myth #1: Multitasking is critical in a world of infinite demand. This myth is based on the assumption that human beings are capable of doing two cognitive tasks at the same time.

The waffle paradox One way for a candidate to change the conversation around her candidacy: have her followers pelt the opposition with waffles at every public appearance. Eggos in particular are lightweight and their shape makes them easy to toss. Particularly in primaries, simplicity and certainty are rewarded. The waffling candidate, the one who hesitates to give a clear yes or no answer to every question is seen as weak. (Worth noting that the word "waffling" didn't start appearing in books much until after the 1960 elections). Of course, this post isn't about politics at all.

How to Use Amazon Web Services to Make a Video on Demand Service - ReadWriteCloud Google TV is about to launch. It's playing a part in the way people think about how the Internet and traditional media meet to form an entertainment experience that is new but not relegated to a traditional television set or a personal computer. Right now, television shows or movies can be converted to be seen online but it requires a digital device to view the programming. The television set can support digital media but it often lacks a browser. That's what Google is banking on will make the difference. A browser, search and content that can be seen on a television set as easily as on a digital device.

How To Make Great Presentations At some point, most of us have to make a presentation. Does the notion fill you with dread? Or perhaps you comfortable with presenting, but often don’t know what to say, or how best to say it? Do you think you might get more sales, or get your way more often, if you could made better presentations? Making better presentations is a craft that can be learned. Let’s break the elements of a presentation down to an easy-to-use template. The 10 Craziest, Wildest And Weirdest Wall Street Stories We've Ever Heard The Deal Sleuth In 2003, ESL Investment's founder Eddie Lampert was leaving his Greenwich, Connecticut offices when two men with guns pulled a thick hood over his head and shoved him to an SUV. The billionaire hedge fund manager was later placed in a motel bathroom, still blindfolded with his hands and feet bound, being held for ransom. Lampert was told by his captors that they had been hired to kidnap him. Lampert knew he could not lie because they obviously knew almost everything possible about him. So the hedge fund manager waited in that motel bathroom for 39 hours.

What Drives Consumer Adoption Of New Technologies? I'm participating in a panel discussion this morning during the offsite of a major media company. They sent me a list of questions in preparation of the event. One of the questions was the title of this post; "What drives consumer adoption of new technologies?". It's an interesting question and one I've never tried to answer directly in writing. But it's also a question we attempt to answer every day in our firm as we evaluate thousands of new startups every year. Let's take ten of the most popular new consumer technology products in recent years (with a couple of our portfolio companies in the mix): iPhone, Facebook, Wii, Hulu, FlipCam, Rock Band, Mafia Wars, Blogger, Pandora, and Twitter and let's try to describe in one sentence or less why they broke out (feel free to debate the reasons they broke out in the comments):

Release Management Done Right I was having lunch with a colleague the other day when his phone rang with the distinctive office ringtone. Rolling his eyes, he excused himself to take the call. It was just a run-of-the mill workplace emergency, but there was one thing he said that I couldn’t help overhearing: “fine! I guess we’ll just do a new release for QA.”