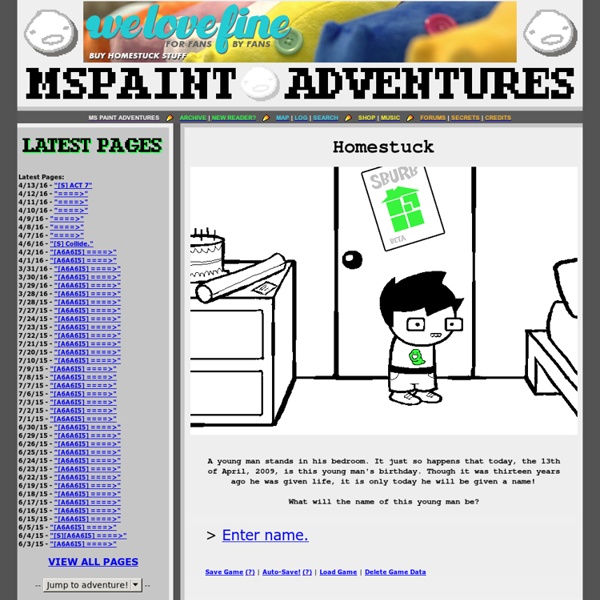 introdoucing, 20104............ the NEWD YEAR Gigapause status: STILL GIGAPAUSED. It's almost over, right? Um, no, sorry. I still have no time estimate, or specific date I am shooting for. 4/13 would be the COOLEST date to shoot for, right? I doubt that's realistic though.

Nuklear Power MS Paint Adventures Wiki - Adventures, characters, locations, and more faith erin hicks' webpage » ICE Ice is an online comic originally serialized on Modern Tales, but now it is free for your reading pleasure. Ice is about a future England where some climate catastrophe has occurred and it is always Winter. In the midst of this bleak setting Hunter and her boyfriend Cirr struggle to survive, their lives made even more dangerous when they come into possession of something that may be the solution to England’s energy crisis … an item others are willing to kill for.WARNING: this comic is rated R for swearing, nudity and mature themes. It is not recommended for anyone under the age of 14. Author’s note: I began Ice in 2004 as a follow up to my first online comic, Demonology 101. Unfortunately, I have yet to finish it, but there is still plenty to read at the moment.

Crimes Against Hugh's Manatees Crimes Against Hugh's Manatees Photo April 20, 2014 307 notes Tags: bears comics webcomics cartoons crimes against hugh's manatees comic strip -Zebra Girl- Clue Coming Soon - Stay tuned for a BIG announcement about an awesome project Jorge is working on! PHD Store - Our store was down for a while, but now it is back! Free excerpt from The PHD Movie 2! - Watch this free clip from the movie that Nature called "Astute, funny"! Watch the new movie! Red's Planet Hi Redheads! As write this (typed on my phone, by the way, so please excuse any typos or grammatical horrors), I’m 30,000 ft in the air over the Pacific Ocean. Since my last post, I’ve had the crazy adventure of moving my family from Los Angeles back to Florida, starting a new job, and taking my first trip to Japan to visit the headquarters of the company I’ll be working with over the next year. So as you can imagine, there hasn’t been much time for comic work. It will be a few weeks before chapter five starts up, but I don’t want to leave everyone with nothing to read or view, so for the next few weeks, I thought it would be fun to dig through some old drawings and take a look behind the scenes at the long history of one of the cast, Tawee. Believe it or not, I’ve been drawing Tawee for nearly 38 years!

Rival Angels - New Readers If you're new here, you may want to bookmark Rival Angels and/or subscribe to my RSS feed. Rival Angels updates every M-W-F. Thanks for visiting! Romantically Apocalyptic To anyone who finds this tooth memory card and the messages left within... My name is Charles Snippy and I am probably the last sane human being left on Earth. I know not whether you will understand this message. I know not whether you'll even be able to decode the ones and zeros on this data card. I know not whether my voice will ever reach anyone. I know not whether the microscopic drives will last long enough and whether the plastic and metal parts will not disintegrate into dust as centuries pass or whether the titanium shell encasing them will remain in place or be consumed by the ever-changing landscape, lost forever.

johnny wander In case you missed it. The cats came with us for Christmas! They're getting along with Mika and Gonta. Tiny Kitten Teeth Becky recently introduced me to an awful band, responsible for a song called C’mon Ride That Train, as well as the theme to Space Jam. I thought it was C’Mon Ride The Bus, so I guess the whole strip title thing has fallen apart. There is a great song called Waiting For The Bus by the Violent Femmes.