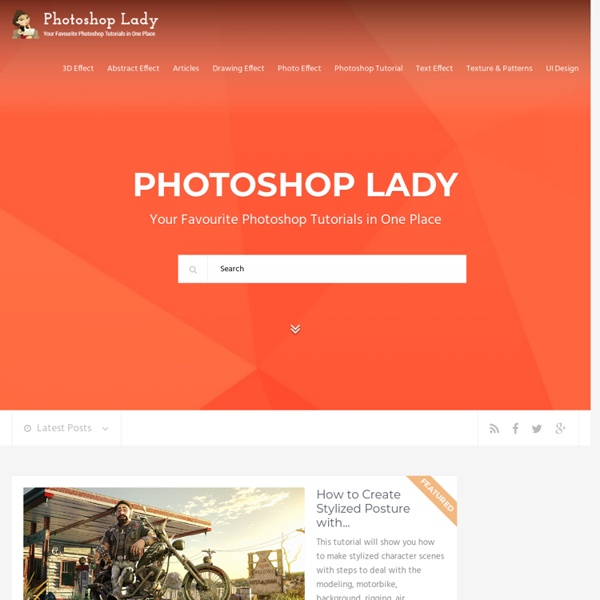 Just My Type It started with a local hot-dog eating contest. Lou Verbain took first place, and moved on to the provincials, where he placed second. But the first-place contestant bowed out when his stomach ruptured, and Lou was on to the nationals. At internationals he placed a distant third to a whip-thin Japanese girl. Lou wasn't about to take that lying down, so he went into hard-core training. AdobeTutorialz How to Create Abstract Vector Background with ... In this tutorial I will give you some tips on how to create abstract background with colorful bubbles in Adobe Photoshop CS5. You will … How to create Vintage New Year Card with Chris ... We have another great tutorial available for our readers today.

Ultimate List of Avatar Yourself Tutorials Yes I’m still raving about Avatar, because of the very cool graphics. Forgive me for that. On another happy note, I was so honored to have my post Fabulous Avatar (2009) Fan Art to be linked on the Official Avatar blog for their post Awesome AVATAR Fan Art. Beautiful Fluffy Clouds in Photoshop - Christmas Tutorial A few days ago I was watching a movie and I saw the Dreamworks logo. It's very well known and incredibly beautiful; that little kid sitting on the moon fishing. But what caught my attention was the clouds on the logo. They were so dramatic, and I thought that it would be a nice idea try to replicate the effect in Adobe Photoshop CS4.

20 PSD Tuts That Will Turn You Into A Photoshop Guru Many people can use Photoshop, but only a select few can call themselves gurus. Learn all the methods in the 20 tutorials below and you’ll be well on your way to joining this elite. Rather than focus on tuts for beginners, intermediates or advanced users, we’ve simply chosen ones which produce jaw-dropping effects. All of them are easy to follow, although most do require at least some prior knowledge and experience. 1. 13 incredible tools for creating infographics Infographic makers are handy when you want to transform masses of information into easy to read visuals. People are much more likely to look at an infographic than they are trawl through endless reams of data, so infographics are definitely useful, but it can be time-consuming to put them together. To get started with making your own infographic, we've selected our pick of the best infographic maker tools and apps out there, including both free and paid-for options. You'll be surprised at how much you can do with even the free infographic makers, and some of these are aimed at non-designers or complete beginners. If you're looking for inspiration before you begin making your own creation, then don't miss our list of the best infographics. For now though, here are the best free and paid-for infographic makers right now.

20 Amazing Photoshop Tutorials in Digital Painting I grew up learning traditional painting and have also seen how digital painting emerged, opening a new era in visual arts. Digital painting is applied using digital tools such as a computer, a digitizing tablet with stylus, and softwares like Corel Painter, ArtRage, openCanvas, GIMP, PaintShop Pro and the most widely used and popular Adobe Photoshop. All these digital tools are used to try to mimic what traditional media has, like utilizing different kinds of digital brushes and effects. Blog / Photo Tutorial — Splash High Speed Photography There are many fun photos of commercially inspired splash images on 500px and we wanted to share the secrets behind this technique with you. Patric Bergkvist was generous to volunteer and talk about his personal experience with splash photography. In this article Patric reveals the step-by-step process behind “Coffee with milk” photo giving away his home studio tricks. Introduction

29 Most Useful Texture Packs of 2008 100 shares The trend of using texture in web design has been around for a while, but in 2008 it was taken to a new level. Not only were there many beautiful sites launched that made use of textures, but there were also lots of useful texture packs created.