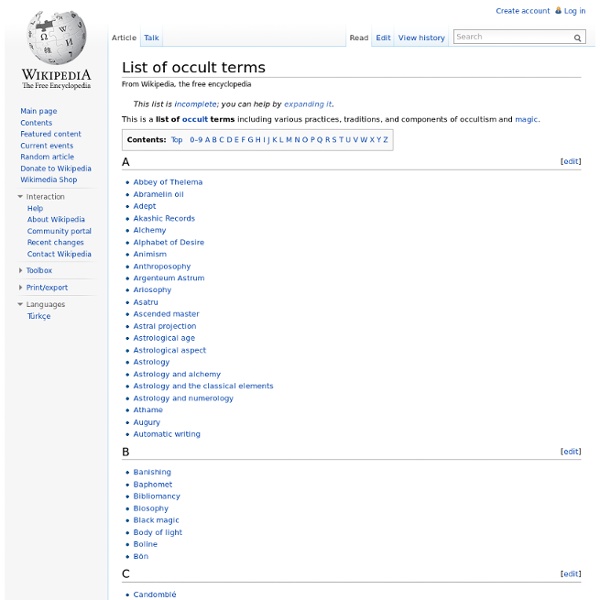 OCCULT BOOKS, RITUAL MAGICK BOOKS, SPELL BOOKS Greek Gods Family Tree ludios.org The Occult - Occultopedia: The Occult and Unexplained Encyclopedia Welcome to Occultopedia, the premier internet index of the paranormal, occult and inexplicable. In addition to being the foremost online destination for information about the supernatural, unusual phenomena and the occult, Occultopedia also features a variety of resources for the pagan community, new age buffs, unexplained phenomena enthusiasts, curious minds, and skeptics as well.Occultopedia is the genuine article, the original and the best internet index of the extraordinary and uncanny, shamelessly copied by many, but never equaled. Online since 1995 — at first in a free web space provider, and in 1997 finally with its own domain name and hosting — Occultopedia still is the principal online resource for those looking for the unexplained, the curious and the unusual. Occultopedia is a work in progress, and is not completed.

Spiritual Spells: Herbal Magick Book of Shadows Many Wiccans, Pagans, Magicians, and Conjure folk pride themselves on their knowledge of herbs, and which ones can be used in which ways. Every herb and root has a medicinal and a magical property of some sort. Each shows its properties by its form, shape, and spirit; this is the Doctrine of Signatures. It is a part of the Craft of the Wise to learn to hear, see, smell, and feel these Signatures so that we may better use and understand these gifts from the Earth that are all around us. The herbs used in Witchcraft and Wicca magick are not always the same as those used in Conjure, so we provide two lists here, covering the most popular herbs in both traditions. One difference between the two paths is that Conjure workers tend to use the roots of plants, while Pagans more often use the leaves and flowers. Two books that we recommend to our own Coven members, and which we believe will set you on the path of discovery about the wonderful subject of herbal spell-crafting are:

Elemental Correspondences - Directions, Moon Phases, Seasons, Time of Day Ceremonial occult systems traditionally depend on systems of correspondences: collections of items that are all associated in some way with the desired goal. While the types of correspondences are nearly endless, associations between elements, seasons, time of day, elements, moon phases and directions have become fairly standardized in the West, and are frequently the basis for additional correspondences. The Golden Dawn's Elemental/Directional Correspondences The Hermetic Order of the Golden Dawn codified some of these correspondences in the 19th century. Daily, Monthly and Yearly Cycles Cycles are important facets of many occult systems. Fire is the element of fullness and life, and it is closely associated with the Sun. Earth, in the opposite direction as fire, therefore corresponds with midnight, winter, and the new moon. Air is the element of new beginnings, youth, increase and creativity. Water is the element of emotion and wisdom, particularly the wisdom of age.

Mythology and Folklore : Featured Articles | Life Paths 360 Myths about the Freemasons By: Karla Perry The National Treasure movies staring Nicholas Cage are exceptional. Greek mythology: The Mares of Diomedes By: Tim Harry The Labours of Heracles are amongst the most famous stories from Greek mythology, and the 12 tasks assigned by King Eurystheus are legendary. Comparisons: Aeneas and Achilles Aeneas and Achilles are two of the great heroes from Greco-Roman mythology, and their exploits were widely written about by Greek and Roman writers. Greek mythology remains a popular subject today in many forms of media; including television and film, literature and even video games. Mythical creatures: Fauns The fauns are some of the most recognisable inhabitants of the Roman mythological world, and many people will have an idea of the nature and physical appearance of these beings. The most influential figures in North American folklore By: Denise Calaman Agrimony or agrimonia refers to a group of perennial plants belonging to the Rosaceae family.

Plants in Mythology - Myth Encyclopedia - Greek, god, story, legend, names, ancient, tree, snake, norse, world, Chinese In many cases, human life ends with death and burial in the ground. Plants are just the opposite. They emerge from the earth and draw nourishment from it. For this reason, many mythological traditions associate plants with birth or rebirth and with the eternal cycle of life springing forth from death. The magical plant or herb of immortality sought by Gilgamesh, the hero of ancient Mesopotamian mythology, provides one example of how myths use plants as symbols of life and of the healing power of nature. Various trees, shrubs, herbs, grains, flowers, and fruit appear in myths and legends as general symbols of rebirth, decay, and immortality. Acanthus. Bamboo. Beans. immortality ability to live forever deity god or goddess Cereal Grains. Although maize, a grain native to the Americas, is now called corn, many Europeans traditionally used the word corn to refer to such grains as barley, wheat, and oats. Clover. Coffee. Ginseng. Ivy. Leek. Mandrake. Manioc. Yam.

Mythology Mythology is the handmaid of literature, and literature promotes happiness. Myths were told or sung to people at least 5,000 years ago. They were told to explain dreams or reasoning for certain happenings or to understand their gods. Homer was a poet around 900 B.C. and was the main recorder of most myths, although there were poets who sang hymns and told stories of the mythological characters some 2,000 years before Homer. The genealogy of the mythical characters is interesting, but we will only touch on a few to get us started. Zeus was considered the main god of mythology and he married Juno, but he had other wives and lovers. One day Prometheus, who was a cousin of Zeus and friend to mankind, met Zeus in a field of poppies. There were many gods and goddess born to rein over the earth, sky and Hades. There were many lesser gods, nymphs, satyrs, muses, furies, fates, and sirens that did the bidding of the gods. Most of this study pertains to Greek myths. Mints- Spearmint- Mentha viridis

How to Create a Personal Altar in Your Home | Happy Black Woman As a faithful student of personal growth and the field of positive psychology, I’m a big fan of any practice that invites more happiness and fulfillment into our lives. Over the years, I’ve developed many habits that have enhanced my outlook on life and helped me achieve some of my big goals. Now there is one tool that I’ve been wanting to incorporate into my life for a long time…a personal altar! There are a lot of different variations out there, but a personal altar is essentially a sacred space in your home that serves as a “spiritual center” where you can focus on being your highest self. Here are some basic guidelines you can use to create your own personal altar…even if you have a small space! Step 1: Find a location for your altar You will need to pick a special area of your home where you can set up your altar. Step 2: Pick at least one theme for your altar I recommend picking one or more themes for your personal altar that describes the purpose you have for the space. Comments