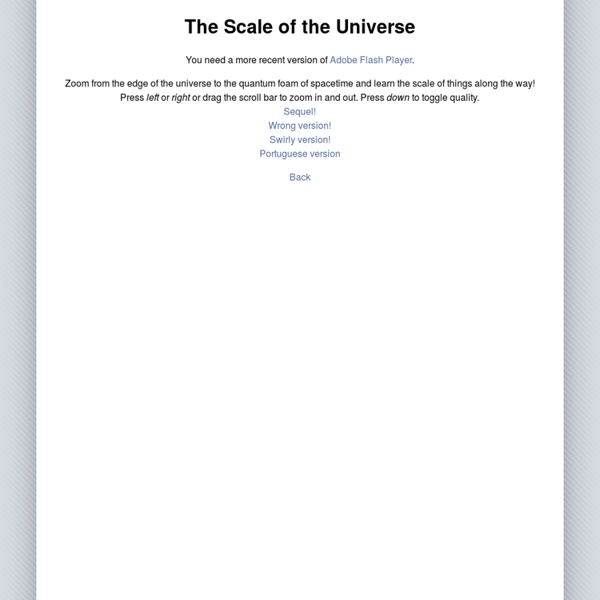 The Elegant Universe: Pt 1 The Elegant Universe: Part 3 PBS Airdate: November 4, 2003 NARRATOR: Now, on NOVA, take a thrill ride into a world stranger than science fiction, where you play the game by breaking some rules, where a new view of the universe pushes you beyond the limits of your wildest imagination. This is the world of "string theory," a way of describing every force and all matter from an atom to earth, to the end of the galaxies—from the birth of time to its final tick, in a single theory, a "Theory of Everything." Our guide to this brave new world is Brian Greene, the bestselling author and physicist.

How to Stop the Bullies - Emily Bazelon The angst and ire of teenagers is finding new, sometimes dangerous expression online—precipitating threats, fights, and a scourge of harrassment that parents and schools feel powerless to stop. The inside story of how experts at Facebook, computer scientists at MIT, and even members of the hacker collective Anonymous are hunting for solutions to an increasingly tricky problem. Geoff McFetridge In the annals of middle-school mischief, the Facebook page Let’s Start Drama deserves an entry. The creator of the page—no one knew her name, but everyone was sure she was a girl—had a diabolical knack for sowing conflict among students at Woodrow Wilson Middle School in Middletown, Connecticut.

This is Rape Culture In the wake of the Steubenville rape case and the appalling reaction to the guilty verdict, both on the part of the media, who sympathized with the perpetrators, and several of the victim’s school mates who have harassed and threatened her, this seems like a good time to stop for a moment and talk about what rape culture is. The endless tweets, blog comments, and divided public reaction to Steubenville is reflective of a serious problem with how rape, and both men and women’s role in it, are perceived in this country right now. The term “rape culture” refers to a culture in which attitudes about rape are tolerant enough to be an enabling factor in anything ranging from sexual harassment to actual rape. When a girl complains about being catcalled on the street because it made her uncomfortable, and you tell her to just take a compliment, you’re perpetuating rape culture. Until the 1970s, rape wasn’t really talked about, let alone publicly.

humanæ 1. On the Customize screen turn off the Use default mobile theme option under Advanced Options. 2. Remove the stash logo from your website by getting a Full License. 3. Science & Environment - How big is space? Big questions demand big answers. And here at Future we have a hard time thinking of a question bigger than: how big is space? So, we set about trying to illustrate it. Veggies May Outpower Genes When It Comes to Heart Disease - - TIME Healthland We know that eating lots of fruits and vegetables is good for the heart, but can a healthy diet really overcome the effect of genes that boost your risk for heart problems? Yes, it can, according to researchers in Canada who studied data on more than 27,000 people to figure out which contributes more to the risk of heart disease: environment or genes. The researchers focused on a group of people with specific genetic variants that are known to increase the risk of heart disease. They found that people who had the variants but ate lots raw fruits and vegetable showed no increased heart risk, compared with those who had a less healthy diet, who were twice as likely to have a heart attack.

New Girl Scout Badges Offer Different Choices To Smart Cookies : Monkey See hide caption The "Digital Movie Maker" badge. Girl Scouts of America Richard Renaldi Photo Series Strangers Touching Walking the streets of New York City, photographer Richard Renaldi felt fascinated by large groups of strangers and how they seemed to relate and interact with one another. In his ongoing series, Touching Strangers, Renaldi explores this relationship by pairing unacquainted individuals for a portrait with one stipulation: the subjects must physically interact in some manner. “I think it reveals a lot about body language,” says Renaldi. “There is clear hesitation in some of the images, and other times, you are surprised at how comfortable they are.” Often posing his subjects in a way one might for family or couple photos, Renaldi attempts to capture an “implied narrative,” bringing a new complexity to portrait-making and visual storytelling. “My objective was to bring an unpredictable variable in a very traditional photographic formula—to create a spontaneous and fleeting relationship between strangers,” he said.

Physics Nobel: Why Einstein Was Wrong About Being Wrong The research that leads to a Nobel Prize in physics can sometimes be a little obscure. In 1990, for example, three scientists got the nod "for their pioneering investigations concerning deep inelastic scattering of electrons on protons and bound neutrons." Got that?

Researchers Advance Cloning Of Human Embryos Researchers in New York are reporting an advance in creating cloned human embryos. The embryos would not be used for reproduction, but rather for the creation of embryonic stem cells. Many scientists believe that human embryonic stem cells made this way could revolutionize medicine. The advantage of stem cells made this way is that they could be personalized to an individual.