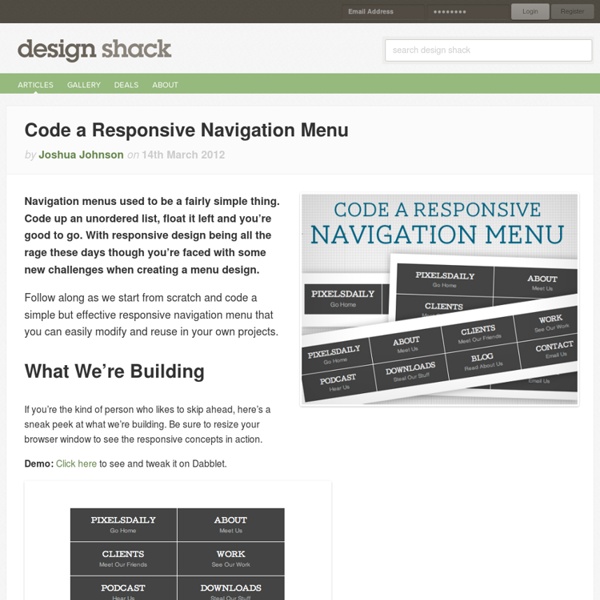 Navigation menus used to be a fairly simple thing. Code up an unordered list, float it left and you’re good to go. With responsive design being all the rage these days though you’re faced with some new challenges when creating a menu design. Follow along as we start from scratch and code a simple but effective responsive navigation menu that you can easily modify and reuse in your own projects. What We’re Building If you’re the kind of person who likes to skip ahead, here’s a sneak peek at what we’re building. Demo: Click here to see and tweak it on Dabblet. The HTML Let’s jump right into this project without a bunch of unnecessary fluff. The first step is to decide on some markup. Believe it or not, this one little piece of code had my head spinning when it came time to test. Fortunately, the fix is easy, just drop in the famous html5shiv and you’re good to go (place this in the head portion of your document). Add the List Add The Sub Tag Progress Check Starter Styles Container Styles Border Fix

Top Drawer - A smooth dropdown menu for responsive web design | Experiment #5 Tap the menu icon in the top right. The click event will assign the class of active to the drawer container which alters the translate value to bring it into view. Modernizr will detect whether the user's device is capable of CSS transforms, if it isn't we simply show and hide the menu after the button is pressed - no point in animating if it isn't going to work smoothly. To set up the experiment we need to create a scenario similar to a box of matches, the box (in our case the top black heading) covers the match drawer beneath (our div with a class of drawer). We build the page as normal but pull the drawer up and off the canvas using the CSS Translate property and show it again in the active state for the div using Translate back to it's regular position. <div class="top"> ...

Stick div at top after scrolling No this is not about using position: fixed by default. Take a look at this page as example, scroll down, and see the top-left. Notice the issue metadata stick on top? The following element would stick on top after you scroll down enough: This will stay at top of page Here is the source code and you can play with jsFiddle: I didn’t invent this, the original code is from an answer on Stack Overflow, and that seems to be from Stack Overflow’s code, but with a few of my own modifications. The #sticky-anchor is for providing an offset reference, so we can compare with and know if visitor scrolls down far enough. z-index is better to be applied since other elements may have that, make sure the number is high enough so #sticky would be on top of others. Related link: jQuery plugin sticky-div.

Advanced CSS Menu Last tutorial, I showed you how to design a watercolor effect menu in Photoshop. This tutorial I will show you how to slice up the menu design (step by step) and put them together with CSS. Most of you probably know how to code a horizontal or vertical CSS list menu. View Demo CSS menu Download Demo ZIP Overview Here are the required graphics to assembe the menu (you can download from the zip). 1. Open the Photoshop file. 2. Turn off the background Layer Group and leave only the menu text layers visible. Create a new file and take note of the file dimension (w x h), in my case the "home" graphic is 144 x 58px. Here is how the hover effect will work. Repeat this step for the other buttons. 3. When you are done with the graphics, let's start coding. note there is an id="menu" assigned to the<ul> tag an unique class name assigned to each link <a> an empty <span> tag (the purpose of this is to make the mouseover effect) #menu Reset the menu to no padding, no margin, and no list-style. #menu span

30+ Pure CSS Menu Tutorials For Web Developers CSS is an very useful and effective tool which help you separate the representation definitions of such structured documents as HTML, XHTML, XML from content. It opens the doors to a lot of powerful and rich opportunities such as create a whole new look, feel, and effect of sites. We introduced some useful CSS skills, helpful CSS tools and most useful CSS resource in pervious articles. Advanced CSS Menu This tutorial I will show you how to slice up the menu design (step by step) and put them together with CSS. Advanced CSS Menu Trick What we want to do here, is instead of simply altering the state of the navigation item the user is currently rolling over, we want to alter the non navigation items as well. A Great CSS Horizontal Drop-Down Menu The question has been asked numerous times in the css forum, "Is a there way to create a css horizontal drop-down menu in css that will work on most browsers. Apple’s Navigation Bar Using Only CSS Bulletproof CSS Sliding Doors CSS menus DropDown CSS Menu

Super Fantastic CSS Navigation Image Rollovers | The Blog of Joren Rapini The fun part of CSS (if you’re a weirdo like me and get a kick out of this sort of thing) is coming up with the most optimized, cleanest, accessible, and compliant code that you possibly can. This tutorial will show you one of my favorite ways of doing a navigation menu with image rollovers done in CSS that uses only one image and very minimal HTML / CSS code. This is by no means the only way of going about it, nor is it the “right” way if there is such a thing, but I’ve found this to be a very quick and efficient way of accomplishing our task. This article is the first of a 2 part series, and the second half will apply this tutorial into creating a CSS only dropdown menu navigation with the image rollovers that is compliant with IE6 and up. Click here to see a demo of what we’ll be doing. The first trick is to make your navigation image. Next we will write all of the HTML out: 01. 02. 03. 04. 05. 06. 07. 08. 09. 10. 11. I always set up my navigation menus in unordered lists. 01. 06.

Mobile Navigation Design & Tutorial One of the common challenges when designing responsive design for mobile is the navigation menu. If the site has many sections or pages, it gets challenging to squeeze all the items into a small mobile resolution. The navigation most likely ends up running into multiple lines or the buttons stacking on top each other. So I'm going to review some of the design solution and provide a quick tutorial on how to create a mobile navigation with jQuery. View Demo Mobile Nav Problem The screenshots below show the navigation layout issues on mobile. Solutions 1) Dropdown One of the commonly used solution is to convert the navigation into a select dropdown. 2) Display as Block Another quick fix is set each menu item as block elements so they display vertically. 3) Menu Icon The last solution that I'm going to review is to use a menu icon/button to toggle the navigation. Mobile Navigation with jQuery (view demo) Below is the sample navigation HTML used in this tutorial: jQuery Code Final Demo Update:

On Scroll Header Effects Some inspiration for headers that animate when scrolling the page. View demo Download source You’ve surely seen those really cool on scroll effects for headers that have been around lately. One example is the header on the Riot Industries website by Phil Renaud which rotates in 3d on click and enlarges when scrolling down. Similar work has been done by Johnny Simpson where he explores Scroll Activated Fixed Header Animations. Today we’d like to give you some inspiration for animated headers and show you what kind of effects could be used to spice up your website’s starting element and give it some life. Please note: this only works as intended in browsers that support the respective CSS properties. The demo for the effects serves as inspiration only and we’ve used a technique that involves changing the state classes of the header which would of course be customized depending on which effect would like to be used. In the demo we use the fantastic jQuery Waypoints plugin by Caleb Troughton.

CSS3 Minimalistic Navigation Menu Martin Angelov As you have probably heard by now, CSS3 animations are a powerful tool, which enables you to create animations which run without the need of applying additional scripting to the page. What is even better, in the next generation of browsers we will have even more powerful tools, including 3D transformations (already present in Safari). But what difference does it make for us today? At the moment only three browsers give you the ability to animate CSS properties – Chrome, Safari and Opera, which together take up only a small part of the browser market. So today we are making something practical – a simple CSS3 animated navigation menu, which degrades gracefully in older browsers and is future-proofed to work with the next generation of browsers. The XHTML The menu is organized as an unordered list. demo.html Inside each li we have a hyperlink with a span inside it. CSS3 Animated Navigation Menu The CSS styles.css – Part 1 styles.css – Part 2 The CSS3 Transition styles.css – Part 3