12 Most Striking Tendencies of Creative People 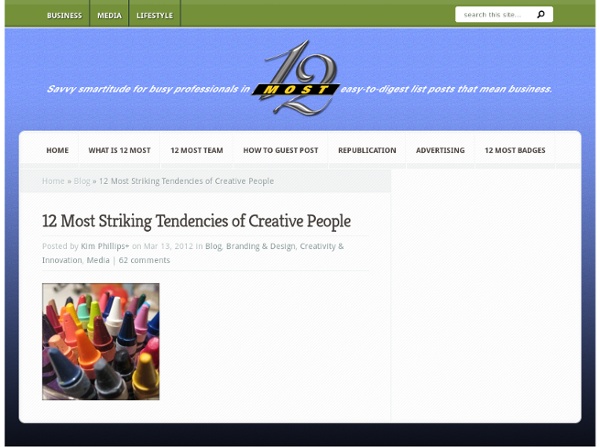 Ever wonder what makes those wacky, creative types tick? How is it that some people seem to come up with all kinds of interesting, original work while the rest of us trudge along in our daily routines? Creative people are different because they operate a little differently. They: 1. Are easily bored A short attention span isn’t always a good thing, but it can indicate that the creative person has grasped one concept and is ready to go on to the next one. 2. Fearlessness is absolutely necessary for creating original work, because of the possibility of rejection. 3. Rules, to the creative person, are indeed made to be broken. 4. Seeing new possibilities is a little risky, because it means that something will change and some sort of action will have to be taken. 5. A photographer doesn’t just take one shot, and a composer doesn’t just write down a fully realized symphony. 6. The hermit artist, alone in his garret, is a romantic notion but not always an accurate one. 7. 8. 9. 10. 11. 12. Related:  Creativity

What Kids Should Know About Their Own Brains Getty Neuroscience may seem like an advanced subject of study, perhaps best reserved for college or even graduate school. Two researchers from Temple University in Philadelphia propose that it be taught earlier, however—much earlier. In a study published in this month’s issue of the journal Early Education and Development, psychologists Peter Marshall and Christina Comalli began by surveying children aged four to 13 to discover what they already knew about the brain. Marshall and Comalli’s questionnaire turned up the same uncertain grasp of the topic, which the researchers attributed to several factors. A 20-minute lesson about the brain was enough to improve knowledge of brain functioning. To that end, they designed a 20-minute lesson about the brain and delivered it to a group of first-grade students. But the success of their effort opens another possibility.

'How Creativity Works': It's All In Your Imagination iStockphoto.com What makes people creative? What gives some of us the ability to create work that captivates the eyes, minds and hearts of others? Lehrer defines creativity broadly, considering everything from the invention of masking tape to breakthroughs in mathematics; from memorable ad campaigns to Shakespearean tragedies. Lehrer joins NPR's Robert Siegel to talk about the creative process — where great ideas come from, how to foster them, and what to do when you inevitably get stuck. Interview Highlights On comparing Shakespeare with the inventor of masking tape "I think we absolutely can lump them all together. "... On how Steve Jobs redesigned Pixar studios to maximize collaboration and creativity "The original design for the Pixar studios consisted of three separate buildings, where they'd put the computer scientists in one building, and the animators in a second building and the third building would contain everybody else: the directors, the editors and so on. " ...

Unleashing Creativity originally posted on "all that inspires me" A few weeks ago, I ran across this graphic on All that Inspires Me, a Posterous site by Keith Stoekler (@keithstoekler). What a great way to approach life! After all, I am… an artist who can not draw.an author who struggles to write.a photographer with limited vision.a blogger of average talent. But, I am a creator. As an educator, I hope that I inspire a creative approach to education – and life – in my friends, colleagues and students. Like this: Like Loading... How to Be Creative Flow – A Measure of Student Engagement When I first heard about Czikszentmihalyi’s “Flow” concept and research, I became quite intrigued with this research. Its face validity immediately resonated with me. I always cherished those times in my own life when I was so fully engaged that I had no other thoughts than the task at hand, with joy coming purely from the engagement. The characteristics of “Flow” according to Czikszentmihalyi are: Completely involved, focused, concentrating – with this either due to innate curiosity or as the result of trainingSense of ecstasy – of being outside everyday realityGreat inner clarity – knowing what needs to be done and how well it is goingKnowing the activity is doable – that the skills are adequate, and neither anxious or boredSense of serenityTimeliness – thoroughly focused on present, don’t notice time passingIntrinsic motivation – whatever produces “flow” becomes its own reward ( Questions for Thought”

The Rise of the New Groupthink But there’s a problem with this view. Research strongly suggests that people are more creative when they enjoy privacy and freedom from interruption. And the most spectacularly creative people in many fields are often introverted, according to studies by the psychologists Mihaly Csikszentmihalyi and Gregory Feist. They’re extroverted enough to exchange and advance ideas, but see themselves as independent and individualistic. They’re not joiners by nature. One explanation for these findings is that introverts are comfortable working alone — and solitude is a catalyst to innovation. Solitude has long been associated with creativity and transcendence. Culturally, we’re often so dazzled by charisma that we overlook the quiet part of the creative process. Rewind to March 1975: Mr. The story of Apple’s origin speaks to the power of collaboration. But it’s also a story of solo spirit. Intentionally so. “Most inventors and engineers I’ve met are like me ... they live in their heads.

10 Creative Collaboration Tips for Educators Posted on Friday June 22, 2012 by Michael Keathley One of the most common laments that educators have is that our profession tends to isolate us from our peers. Faculty may spend all day in a classroom working with their students with little, if any, time to converse with other teachers. On those occasions when educators have a chance to sit down and talk with one another, the torrent of creative energy and ideas is both electrifying and fulfilling. The unfortunate part is that too often we let the day-to-day routine keep us from getting together to share ideas and inspiration like this. As blogger Edna Sackson demonstrated, there are actually a lot of easy ways to spark creative collaboration among our colleagues. 1. How many times have we thought: “I wish I had someone to brainstorm a new approach to teaching this lesson,” or “I would love to present at that conference, but I wish I could find someone to collaborate with”? 2. 3. 4. 5. 6. 7. 8. 9. 10.

How to Find Your Creative Sweet Spot nice try. the research cited doesn't back up the claims made, let alone the prescription. You're likely most creative when you're groggy: The cited study didn't actually measure creativity. Creative problem solving is typically assessed by the use of ill-defined problems, which don't have a clear, or single, right answer. Insight problems like those used by Wieth & Zacks incorporate logic and have a single right answer. Being drunk helps creativity: This study measures "creativity" using the remote associations test, which isn't actually a good measure of creativity, but rather verbal fluency. Exercise can make you more creative: again, not actually measuring creativity, but rather divergent thinking, which is only a component of creativity. We may even be more creative when we're asleep: You said this was a study.

3 Knowledge Domains For The 21st Century Student Thinking in the 21st century is just different. That doesn’t mean we’re all suddenly omnipotent cyborgs, nor does it mean we’ve all become mindless social media addicts that spend our cognitive might tapping, swiping, and drooling on our smartphone and tablet screens. But just as the 19th century presented unique challenges to information processing than the 18th or 20th, the 21st century is different than the one before, or that the one that will come after. punyamishra.com recently released the following graphic that I thought was interesting, mainly in that it identified knowledge types for modern learning, settling on Foundational, Humanistic, and Meta Knowledge. 3 Knowledge Domains For The 21st Century Student 1. Digital/ICT Literacy, Core Content Knowledge, Cross-disciplinary Knowledge 2. Life/Job Skills, Ethical/Emotional Awareness, Cultural Competence 3. Creativity and Innovation, Problem-Solving and Critical Thinking, Communication and Collaboration Using This Model In Your Classroom

#56 – Creative thinking hacks All of us possess everything necessary to be more creative. The problem is we’ve been trained away from our creative instincts by schools, parents, movies and workplaces. The word creativity is frequently inflated by association, frequently appearing with overused, hype-laden words such as genius, brilliance, revolution and innovation. Hype mongers and creative intimidators throw those labels around like candy, scaring most people out of their own natural creative instincts. This essay, a high speed hack-centric interpretation of the creative thinking course I taught at the University of Washington, offers both concepts and tricks to help anyone be creative at any time. If you don’t want to read, you can watch the presentation: Kill creative romance First, like most media today, this essay starts with violence (and unnecessary exclamation points)! On the new creative landscape you’ve made, place the following simple definition: an idea is a combination of other ideas. Combinations Related

4 Essential Rules Of 21st Century Learning 4 Essential Rules Of 21st Century Learning by Jennifer Rita Nichols The term “21st century” has become an integral part of educational thinking and planning for the future. Educators and administrators are actively searching for ways to prepare students for the future, and the educational system has been evolving faster than ever before. Various studies have shown us that rote memorization is not an effective learning strategy, and that teacher-centered classrooms may not be the most efficiently structured ones for student engagement. However, despite learning about the skills that students will need to develop to become successful in the 21st century, as well as what beliefs about education may be worth hanging onto or throwing away, schools and teachers are left trying to figure out what their role needs to be in the education of their 21st century students. Nowadays, we don’t live in the same world. So then, what is the role of education in the 21st century? Society has changed. 1. 2. 3.