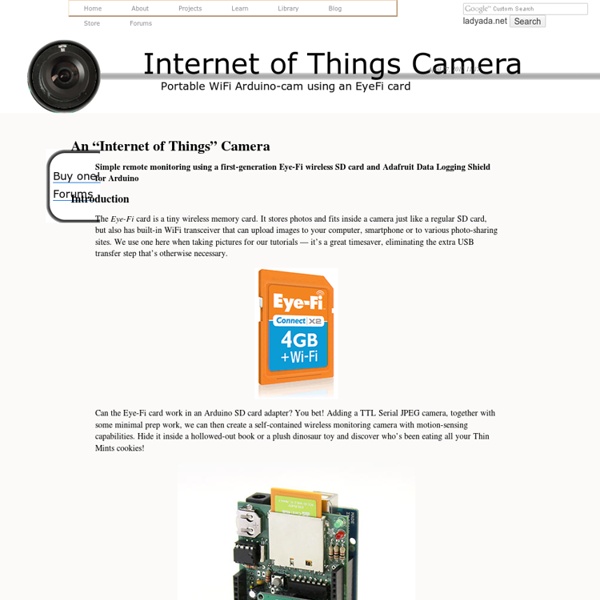 Simple remote monitoring using a first-generation Eye-Fi wireless SD card and Adafruit Data Logging Shield for Arduino Introduction The Eye-Fi card is a tiny wireless memory card. It stores photos and fits inside a camera just like a regular SD card, but also has built-in WiFi transceiver that can upload images to your computer, smartphone or to various photo-sharing sites. Can the Eye-Fi card work in an Arduino SD card adapter? What makes this combination way cooler than just a normal SD card or a USB cable to a computer is all the infrastructure provided by the Eye-Fi service — not just transferring images to your computer, but pushing them to your smartphone, photo-sharing sites like Flickr, issuing email or Twitter notifications, etc. The camera project didn’t require any major engineering effort, but rather was a simple “mash up” of existing elements — a perfect example of the sketching principle of Arduino. Parts and Software Lists Parts used in this project include: Make It! Use It!

InternetActu | InternetActu.net sur LeMonde.fr Spark Socket Connects Your Regular Old Light Bulbs to the Internet | Gadget Lab Spark Devices founder Zach Supalla holding a light bulb screwed into a Spark socket. Image: Spark Devices Companies from Google to Comcast to Electric Imp are trying to connect home devices and appliances to the web, but the internet of things remains more of a complicated, distant dream than a reality. Spark Devices wants to start off simple, with one of the most used items in your house — the light bulb. Spark Devices launched on Kickstarter with a working prototype of what it calls the Spark Socket. “[The Spark Socket] was inspired by my dad, who’s deaf and uses lights for notification,” Founder Zach Supalla told Wired. Backers can pre-order Spark Sockets for $60 apiece, and the company is trying to reach $250,000 on Kickstarter. “Products like these will definitely get cheaper over time,” Supalla said. Watch the video below to see the Spark Socket in action:

Monitor: An internet of airborne things THE spread of mobile phones in developing countries in the past decade has delivered enormous social and economic benefits. By providing a substitute for travel, phones can make up for bad roads and poor transport infrastructure, helping traders find better prices and boosting entrepreneurship. But although information can be delivered by phone—and, in a growing number of countries, money transferred as well—there are some things that must be delivered physically. For small items that are needed urgently, such as medicines, why not use drone helicopters to deliver them, bypassing the need for roads altogether? That, at least, was the idea cooked up last year at Singularity University, a Silicon Valley summer school where eager entrepreneurs gather in the hope of solving humanity’s grandest challenges with new technologies. After arrival at a station, a drone would swap its depleted battery pack for a fully charged one before proceeding to the next station. Mind over matter

The Internet of Things: What is the IoT Toolkit? This is the second of a three-part series on the Internet of Things with Atmel’s Tom Vu and Internet of Things Council member Michael Koster. Read Part 1 here. Tom Vu (TV): What is in the roadmap for IoT Toolkit? Michael Koster (MK): The IoT Toolkit is an open source project to develop a set of tools for building multi-protocol Internet of Things gateways and service gateways that enable horizontal co-operation between multiple different protocols and cloud services. Michael Koster. The foundation of the platform is purely bottom up, based on applying best practices and standards in modern web architecture to the problem of interoperability of IoT data models. To that end, I created a public github and started building the framework of the data model encapsulations and service layer, and mapped out some resourceful access methods via a REST interface. The next step is to start building a community consensus around, and participation in, the data models and the platform. [via bsr.org]

3 Questions for Tom Coates on his Talking House | Industrial Internet The Industrial Internet has been described as the latest act in the broader Internet’s evolution. But while computing power, analytics, and distributed sensors are just beginning to unlock the power of industrial machine data, the broader consumer-focused Internet has been tapping the power of interconnected machines for some time. To get a perspective on how quickly linked-machines are being adopted and creatively employed at the consumer level, we spoke with Tom Coates, a San Francisco-based product designer who is obsessed with the benefits of interconnected machines. “It’s just hit 68 inside – that’s rather lovely. We spoke with Tom about what he’s building with his House of Coates. Give us an overview of the hardware and software you use to make your house talk. I use a variety of bits of hardware – for me the major concern as a designer and early-adopter in this area is that I can hook up the hardware with other products and services. Why Twitter?

Meta Products — Book: Introduction Throughout time we've used different ways to deal with change. Someone in the nineteenth century for instance would probably have responded to change very differently from the way you do. Back then, traditions, religion, national identities and simply distance and time were constraints to all that was new; changes took place slowly. Today's world is totally different, the filters used to constrain cultures from being exposed to external influences are more porous, gaining access to knowledge is easier, and the patterns of time demand that we respond almost instantaneously to the ever increasing stimuli we face. All this makes it difficult for us to realize what exactly is changing today. In any case, whether centuries ago or today, people's aspirations are the drivers of change. Designers also have an impact on the future as they are constantly looking ahead. This aspiration caused people to look for ways to make the industrial society flourish.

Home Environmental Sensors: Ninja Sphere We’ve told you before about Ninja Blocks, a home automation system that couples wireless sensors with simple software to create rules for things like motion detection alerts and remotely switching lights on or off. Now the eponymous Australia-based startup behind Ninja Blocks is hard at work on the next evolution of the connected home: the Ninja Sphere. In addition to the environmental sensors of the Ninja Blocks system, the Ninja Sphere will be able to connect to just about any wireless device through WiFi, Bluetooth, or ZigBee (a wireless standard for low-power devices). That means your phone, webcam, and WiFi-enabled TV can all be part of your Ninja Sphere, along with any number of third-party home automation gadgets. The heart of the Ninja Sphere is the Spheramid base station. Where the possibilities really open up, though, is in the Ninja Sphere’s location tracking ability. Related: Home sensor systems - Ted Burnham

LightBlue Cortado by Punch Through Design Neurio: Home Intelligence by Energy Aware Technology Inc. First off, special thanks to people who are helping us bring Neurio to life: Jordan Husney, Chris Hennig, Mo Afrasiabi, Guo Zhenyu, Robert Virtue, Oren Shklarsky, Amir Valizadeh, and Sam Goldman. We also thank our friends who have helped us put a great campaign together: Adrian Oruclar, Paul Detjen, Meera Dalal, Yaniv Talmor, Dallas Luther, Zach Supalla, Stephanie Rich, James Hallam, Salim Hassan, Sophia Haque, Robin Yaredic, Ava and Aryan Yazdani, Marla Parker, Taran Grey, Ramin Sahebjavaher, Ashish Mohan, Nicholas Himmelman, Andy Nguyen, Sina Sahami, Paul Cubbon. We also wish to thank our moms. Just because. Is shipping included? Shipping is included within the US and Canada. * International Shipping * Add $15 to your pledge, and we will ship internationally. Does Neurio work with 220, 230 or 240v panels? Yes it does. What countries is Neurio certified for? Do you support 3-phase homes? We heard you! What if my home has more than one breaker panel or meter feed? Who made your video?