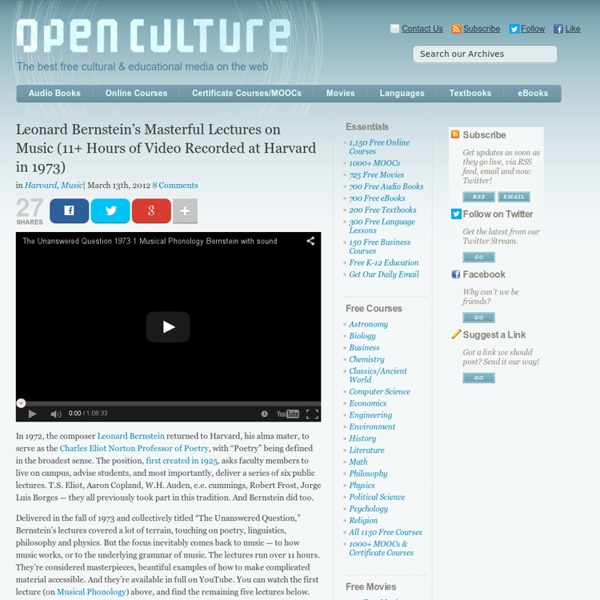 In 1972, the composer Leonard Bernstein returned to Harvard, his alma mater, to serve as the Charles Eliot Norton Professor of Poetry, with “Poetry” being defined in the broadest sense. The position, first created in 1925, asks faculty members to live on campus, advise students, and most importantly, deliver a series of six public lectures. T.S. Eliot, Aaron Copland, W.H. Auden, e.e. cummings, Robert Frost, Jorge Luis Borges — they all previously took part in this tradition. And Bernstein did too. Delivered in the fall of 1973 and collectively titled “The Unanswered Question,” Bernstein’s lectures covered a lot of terrain, touching on poetry, linguistics, philosophy and physics. Lecture 2: Musical Syntax Lecture 3: Musical Semantics Lecture 4: The Delights & Dangers of Ambiguity Lecture 5: The 20th Century Crisis Lecture 6: The Poetry of Earth This lecture series has been added to our extensive collection of Free Courses.

Free Music Fonts Advertising: These fonts are totally free of charge, and you may redistribute them as long as you don’t host them on another website. An extensive list of music font links (as well as other music links) is available from Gerd Castan: This figured bass font was created to ease entry of figured bass symbols in applications such as Finale or Microsoft Word. Download this font for Mac or Windows Open source version of this font (GPL Open Font License), OpenType format. Leonardo Da Vinci's wacky piano is heard for the first time, after 500 years Take a bow: The viola organista's strings are played in the same way as a cello. Photo: Tomasz Wiech/AFP A bizarre instrument combining a piano and cello has finally been played to an audience more than 500 years after it was dreamt up Leonardo da Vinci.

IRANIAN PROGRESSIVE MUSIC / FUSIONS & ROCK When in 15th century Western civilisation laid its first fundaments, it used many ideas which were developed and described in some Middle Eastern writings. Not only the re-establishment of Greek philosophical fundaments, the principles of justice and many other developments were adapted and further developed. Also fundaments of music were built and directly influenced by some ideas from the Middle East (especially the use of drums and rhythm is more often mentioned). Different to Arab languages Persian language, especially the older form, has the fundaments and origin of as various other Western languages. In various periods communicating and developing ideas together over the entire world was normal. This still is the case, except that rulers often limit the amount of communication, creativity and of the feeling there is an existence of an interconnected creativity net possible.

Music and Architecture: Confronting the Boundaries between Space and Sound Professor Jonathan Cole My talk this evening is an exploration of the relationship between physical space and musical space. I will explore some of the links which exist between musical composition and architecture. I will look at how composers have used physical space within their methodology and how the architecture of our environment can open up new possibilities within the development of musical ideas. At various points within the lecture, in order to provide some respite, I will be playing excerpts of a selection of pieces which explore the ideas of musical space in individually imaginative ways. Obviously, with a stereophonic setup, it is impossible to experience the specific spatial arrangement of these pieces, and a lack of time means I cannot play extensive excerpts.

Rhythm / Pitch Duality: hear rhythm become pitch before your ears I just got home from a five-week tour in Europe and finally have some time to do what I call research. The way I see it, being a touring musician is a bit like being a scientist: you spend a bunch of time in the lab, and you find something that you’re excited about; then you have to go out and give a bunch of seminars to tell the world about it. But very soon you’re itching to get back to the lab, because you want to discover the next thing. Dirty Laundry : The Soul Of Black Country.(2005) ( Country Soul - Southern Soul ) l Killer Collection Of Country Soul From The 60's And 70's 1. Ella Washington: He Called Me Baby 2.

How To: Get Special Characters and Symbols on your iPhone or iPad with Glyphboard Here’s a great web app from Neven Mrgan. It’s called Glyphboard and it allows you to copy and paste cool glyphs such as , ☂, ☺, ✔, and ♫ on your iPhone, iPad or iPod Touch. Use Glyphboard for email, tweets, text messages… any time you want to spice things up with a bit of ‘character.’ To install the web app, go to Glyphboard 2.0 in Mobile Safari, click the bookmark arrow at the bottom, then “Add to home screen.”

Train//Tracks Train//Tracks is an album-length collection of field recordings which captures the performances and environment of busking musicians in Chicago's underground train stations. The noisy interplay of the trains themselves becomes an integral part of the mix while providing natural transitions. Chicago's deep and rich musical tradition extends into the city streets and far underground to the train stations where buskers play for ever-shifting crowds. Stop to listen and one finds a unique patchwork of classic and contemporary musical influences drawn from around the world. The Soul of Black Country Get off yer horse and check out a few samples from volume one of the two-volume Dirty Laundry compilation that rounds up a collection of black country-soul nuggets, both covers and originals (James Brown covering Hank Williams, anyone?), from the sixties and seventies. Thanks to mr. Ryan for the turn-on. Download: MP3:

The rest is noise: Chapter 1: The Golden Age (for iPad) Part of the Rest Is Noise Audio Guide Playbill from the Austrian premiere of "Salome" in Graz, 1906. Click on the image to enlarge it. Note: The first page number is for the hardback edition, the second number is for the paperback.