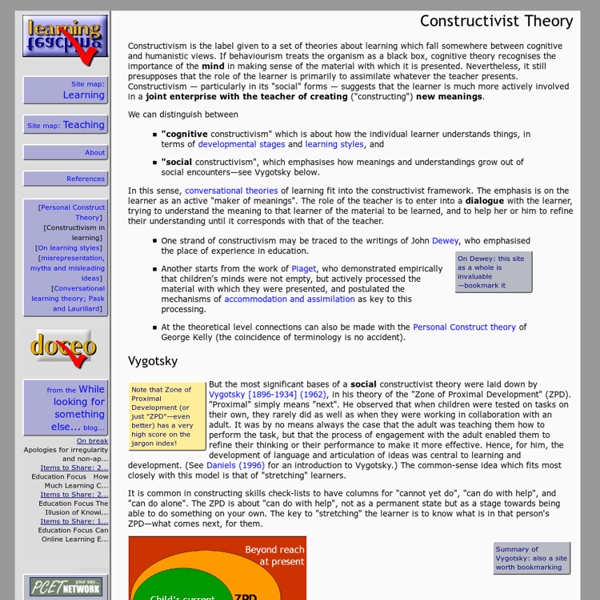 Constructivism is the label given to a set of theories about learning which fall somewhere between cognitive and humanistic views. If behaviourism treats the organism as a black box, cognitive theory recognises the importance of the mind in making sense of the material with which it is presented. Nevertheless, it still presupposes that the role of the learner is primarily to assimilate whatever the teacher presents. Constructivism — particularly in its "social" forms — suggests that the learner is much more actively involved in a joint enterprise with the teacher of creating ("constructing") new meanings. We can distinguish between "cognitive constructivism" which is about how the individual learner understands things, in terms of developmental stages and learning styles, and "social constructivism", which emphasises how meanings and understandings grow out of social encounters—see Vygotsky below. In this sense, conversational theories of learning fit into the constructivist framework.

John Dewey and informal education (This ‘John Dewey’ page is due to be extended). John Dewey (1859 – 1952) has made, arguably, the most significant contribution to the development of educational thinking in the twentieth century. Dewey’s philosophical pragmatism, concern with interaction, reflection and experience, and interest in community and democracy, were brought together to form a highly suggestive educative form. John Dewey is often misrepresented – and wrongly associated with child-centred education. In many respects his work cannot be easily slotted into any one of the curriculum traditions that have dominated north American and UK schooling traditions over the last century. Social Constructivism From Emerging Perspectives on Learning, Teaching and Technology Beaumie Kim The University of Georgia Review of Social Constructivism

Constructivism - Learning Theories Summary: Constructivism as a paradigm or worldview posits that learning is an active, constructive process. The learner is an information constructor. People actively construct or create their own subjective representations of objective reality. Social Development Theory Overview The major theme of Vygotsky's theoretical framework is that social interaction plays a fundamental role in the development of cognition. Vygotsky (1978) states: "Every function in the child's cultural development appears twice: first, on the social level, and later, on the individual level; first, between people (interpsychological) and then inside the child (intrapsychological). This applies equally to voluntary attention, to logical memory, and to the formation of concepts. All the higher functions originate as actual relationships between individuals."

Constructivist Theory in Simple Terms Some authors divide constructivist theory into two main areas: cognitive constructivism, which focuses on the individual learner, and social constructivism, which emphasizes learning as occurring within the context of dialogue and social interaction. Cognitive constructivism based on the work of educational psychologists like Piaget, who views knowledge as being created through experience. Knowledge is not transferred from teacher to student in a ready-made format, but actively built by each learner. The internet makes this process much easier than in a non-wired classroom. By using hyperlinks, educators can connect to several resources, scaffolding studentsÃ¢â‚¬â„¢ construction of knowledge.

Learning Theories One of the key issues to look at when examining any Learning Theory is Transfer of Learning. Indeed, this is such an important idea, that it is a field of research in its own right. Researchers and practitioners in this field work to understand how to increase transfer of learning -- how to teach for transfer. Introduction Vygotsky's constructivism Chad Galloway The University of Georgia Vygotsky's Theories The work of Lev Vygotsky and other developmental psychologists has become the foundation of much research and theory in developmental cognition over the past several decades, particularly of what has become known as social development theory. Vygotsky's theories stress the fundamental role of social interaction in the development of cognition (Vygotsky, 1978; Wertsch, 1985), as he believed strongly that community plays a central role in the process of "making meaning."

Explaining Social Constructivism, Communication Teacher, 2011 Many versions of social constructivism (SC) maintain that objects exist only after they enter communicative space. At one level an object's existence is determined through an individual's sensory perception; through communicative acts, both intra- and interpersonally, they are defined and eventually embody meaning. The social process of defining the object (i.e., its construction) enables it to exist in a social context, to have meaning. Given this SC position, the confusion often surrounds just exactly what is being socially constructed: It isn't the physical composition of an object (i.e., its material arrangement) that is brought into existence, but its social composition, the ideas which define that object within a social context. In other words, communication changes how objects are perceived and the range of potential meanings they can embody. Routledge.