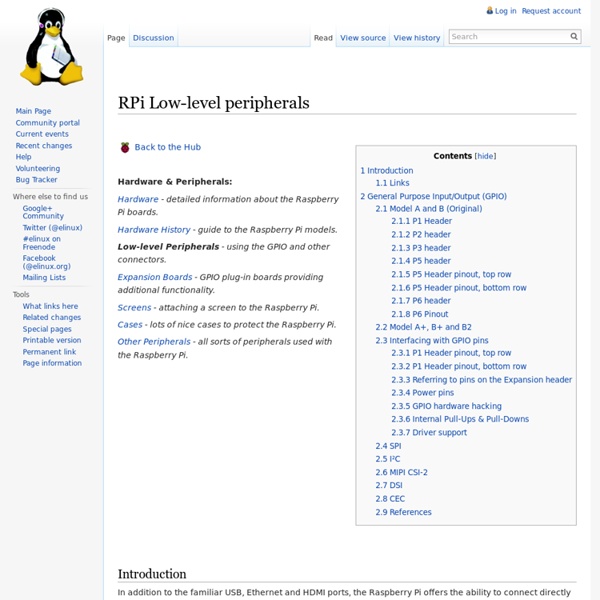 Back to the Hub Hardware & Peripherals: Hardware - detailed information about the Raspberry Pi boards. Hardware History - guide to the Raspberry Pi models. Low-level Peripherals - using the GPIO and other connectors. Expansion Boards - GPIO plug-in boards providing additional functionality. Screens - attaching a screen to the Raspberry Pi. Cases - lots of nice cases to protect the Raspberry Pi. Other Peripherals - all sorts of peripherals used with the Raspberry Pi. Introduction In addition to the familiar USB, Ethernet and HDMI ports, the Raspberry Pi offers the ability to connect directly to a variety of electronic devices. Digital outputs: turn lights, motors, or other devices on or off Digital inputs: read an on or off state from a button, switch, or other sensor Communication with chips or modules using low-level protocols: SPI, I²C, or serial UART Connections are made using GPIO ("General Purpose Input/Output") pins. Note that no analogue input or output is available. Links Useful P2 pins:

PN532 Breakout Board - Cookbook PN532 Breakout Board Adafruit offers a NFC breakout board which is also packaged as a full kit including a mbed & other parts to get you started. Getting Started¶ Wiring it up¶ First of all pinheads need to be soldered on the board's main connector as well as on the two jumpers' location. The board's NFC controller (PN532) can either be configured for serial, I2C or SPI communication. OSPi Download License Content on this site is published under the Creative Commons Attribution-ShareAlike 3.0 license. OpenSprinkler Pi Download Hardware and Software updates are now all released in GitHub (under OpenSprinkler Pi subfolder): Parts List can be found in the following spreadsheet: WL:Wifi Configuration - gc-linux From gc-linux Our port of the Linux kernel to the Nintendo Wii supports the internal wireless LAN daughter card when booted via BootMii. The following sections describe the necessary steps to configure a wifi connection on Debian-based distributions (like whiite-linux). Preparing the firmware files

Category:QtonPi English | Русский | Български | Українська Qt 5 and Raspberry Pi combine perfectly in so many ways. The goal of this project is to develop the required enablers for App and Platform Developers to enjoy Qt 5 after investing $35 in a Raspberry Pi board. We have got some pre-release boards and we have reached the first proofs of concept. We are in contact with the Raspberry Pi Foundation and Broadcom to ensure that Qt 5 is well supported and all the components can be released and developed openly.

SimpleCV: Installing SimpleCV on the Raspberry Pi — SimpleCV 1.3 documentation Power up the raspberry pi and log in. Connect the board to ethernet. Username: pi Password: raspberry Network should be up and running with dhcp, if not you must manually configure the network settings.Run the following command to install the necessary dependancies sudo apt-get install ipython python-opencv python-scipy python-numpy python-setuptools python-pip Attendance system using Raspberry Pi and NFC Tag reader - All With my new toy Raspberry pi I've done several testing projects from instructables, adafruit etc. But after a while it became boring and I've started looking for something actually useful for me. My previous playground was my new phone several weeks ago which came with new feature NFC reading.

Interfacing with a Wiimote - Physical Computing with Raspberry Pi Difficulty: intermediate This tutorial will show you how to connect a Wiimote to the Pi over Bluetooth. You will then be able to read input from it, including the state of the buttons and accelerometer and send it output, e.g. changing the LED state and playing with rumble. It is recommended to use one of our SD cards or images, if you are not then you will need: python-cwiid and to set your Bluetooth in discoverable mode with sudo hciconfig hci0 piscan. let Raspberry Pi make phone calls This project was contributed by Andy Fundinger, a professional Python developer and trainer. As an assignment for Mother's day, Andy built this integration as a way to teach his students how to make calls to their mother's using Plivo and Raspberry Pi. Below are the instructions on how to build it yourself. In this integration, you'll be able to: Make calls to pre-set numbers using a keypad attached to Raspberry Pi What is Raspberry Pi?

Scratchbox - installdoc This section describes how to set up a Debian environment inside Scratchbox. The Debian development kit offers tools for creating Debian packages in the same way they are created on a native Debian system. If you did not already do so when installing Scratchbox (see Chapter 2 ), you need to install the optional 'scratchbox-devkit-debian' package in order to do Debian development. If you installed Scratchbox from Debian packages, you can install Debian devkit with the following command: Otherwise you need to obtain the tarball package (see [ 6 ]) and extract it to the '/' directory: After the devkit is installed, a target that uses Debian devkit must be created (or an existing target must be reconfigured).

Linux Projects - Documentation How to install or upgrade UV4L on Raspbian (for the Raspberry Pi) To install UV4L open a terminal and type the following commands: $ wget && sudo apt-key add . Cloning a MiFare classic 1k tag In my last post, I quickly explained how RFID worked and what you could expect from it. More particularly, I quickly presented how the security of a MiFare Classic 1k tag worked. This will help you understand what follows, since we now want to clone a Vigik tag, most of them using the very same MiFare Classic 1K tags for the tag hardware part.