Infant mortality rates regressed against number of vaccine doses routinely given: Is there a biochemical or synergistic toxicity? 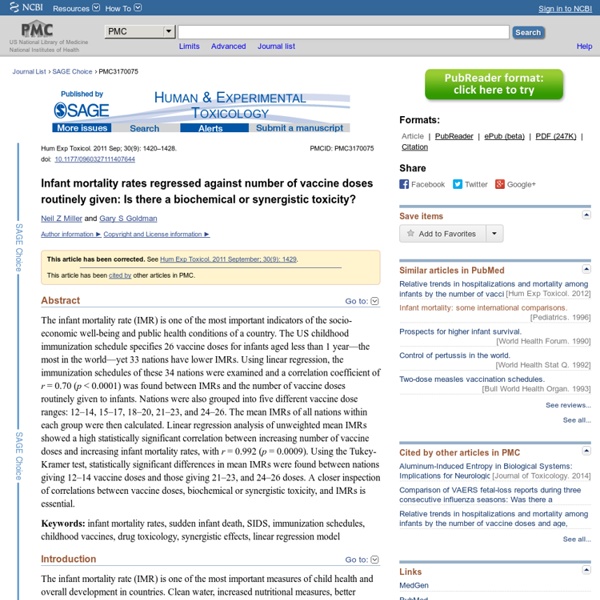 aol Jul. 3, 2015 5:07 PM ET SEATTLE (AP) — A woman killed by measles in Washington state had been vaccinated against the disease as a child but succumbed because she had a compromised immune system, a local health official told a TV station. The woman's death was the first from measles in the U.S. in 12 years and the first in the state in 25 years. The case wasn't related to a recent outbreak that started at Disneyland and triggered a national debate about vaccinations, according to the Washington State Department of Health. Officials said it was a different strain. The Washington woman lacked some of the measles' common symptoms, such as a rash, so the infection wasn't discovered until an autopsy, department spokesman Donn Moyer said Thursday. Dr. State officials didn't say whether the woman was vaccinated, but they did note she had a compromised immune system. Measles is highly contagious and spreads when an infected person breathes, coughs or sneezes. This week, California Gov.

Science of Vaccine Damage A team at Purdue University School of Veterinary Medicine conducted several studies (1,2) to determine if vaccines can cause changes in the immune system of dogs that might lead to life-threatening immune-mediated diseases. They obviously conducted this research because concern already existed. It was sponsored by the Haywood Foundation which itself was looking for evidence that such changes in the human immune system might also be vaccine induced. It found the evidence. "Our ongoing studies of dogs show that following routine vaccination, there is a significant rise in the level of antibodies dogs produce against their own tissues. I must mention here that Dr Glickman believes that vaccines are a necessary evil, but that safer vaccines need to be developed. About the Author: Catherine O'Driscoll runs Canine Health Concern which campaigns and also delivers an educational program, the Foundation in Canine Healthcare. Endnotes 1.

The collapse of American democracy 12 March 2012 One week ago, US Attorney General Eric Holder delivered a speech asserting the right of the president to secretly order the assassination of American citizens. Citing the so-called “war on terror,” he claimed that this never-before-asserted authority was lawful under the president’s war-making powers and was not subject to judicial review. Holder stressed that the president’s power to order extra-judicial killings was part of a range of powers including the abduction of suspected terrorists and their indefinite internment, without trial, either in civilian or military prisons. In an attempt to give a constitutional gloss to this assertion of police-state powers, Holder made the astonishing assertion that “due process and judicial process are not one and the same… The Constitution guarantees due process, not judicial process.” Last Tuesday, the day after Holder’s speech, Obama held his first White House news conference of the year. Barry Grey

The Woman Who Died of Measles in Washington: How a Press Release Became a Media Sensation - The Vaccine Reaction | The Vaccine Reaction Any average reporter should’ve then gone to his or her editor and said, “Sorry boss, no story there.” On July 2, 2015, the Washington State Department of Health issued a press release titled, “Measles led to death of Clallam Co. woman; first in US in a dozen years.”1 Within hours, the release began to be picked up by numerous media sources, including ABC News,2 BuzzFeed News,3 CBS News,4 CNN,5 Forbes,6 Fox News,7 NBC News,8 Reuters,9 Slate,10 the Detroit Free Press,11 The Huffington Post,12 The New York Times,13 the Puget Sound Business Journal,14 The Seattle Times,15 The Verge,16 the Washington Examiner,17 and The Washington Post.18 (Don’t forget to note the lead-off to each story—those scary microscope images of the measles virus. Be assured that this is just the tip of iceberg. Sounds pretty darn bad, doesn’t it? Let’s take a look at the press release which generated all these articles, headlines. Nothing newsworthy there. Nothing newsworthy there either. Hardly newsworthy.

Vaccines: Allergy, Autoimmunity, Autism, and More January 21, 2016 “The conception that antibodies, which should protect against disease, are also responsible for disease, sounds at first absurd.” — Clemens von Pirquet, 1906 A while back I wrote a blog stating that, while my own views on vaccines could be considered extreme (I had come to the conclusion that vaccines are not a good idea for anyone), I was very grateful for those whose concerns were much more lukewarm as long as they were willing to express them publicly. In that blog, I didn’t go into the reasons why I had come to that particular conclusion and expressly stated that it was my own opinion based upon years of reading the science behind the interaction of the immune system and injected vaccines. Immune System Basics The first thing to understand is how our bodies fight off infection, what we call the “immune system.” The Humoral Immune System and the Production of Antibodies There are five types of antibodies, and the different types accomplish different goals. Dr.

Who are America's Creditors? or, Debt Economics for Beginners Thanks to all of you who read and enjoyed The U.S. National Debt – 233 years in the making. Here, at last is the third article in this series on World Debt – Who are America’s Creditors? Let us fittingly start this article with wise words from one of the founding fathers: "There is in the nature of government an impatience of control that disposes those invested with power to look with an evil eye upon all external attempts to restrain or direct its operations. U.S. As of today’s date (January 27, 2010), the U.S. national debt sits at $12,301,772,321,038.04 according to the U.S. This is broken down into two main categories: Debt Held by the Public $7,784,152,852,860.25 Intragovernmental Holdings $4,517,619,468,177.79 Which tells us very little It won’t tell you who America’s creditors are Back to searching we go. Be sure not to get lost in some of the more strident sites, or lose your perspective in the tons and tons of misinformation out there. Keep your head. America’s Major Creditors No!

A Dose of Reality for Specialized Courts: Lessons from the VICP by Nora Freeman Engstrom The latest in a long line of reform proposals, health courts have been called “the best option for fixing our broken system of medical justice.” And, if health courts’ supporters are to be believed, these specialized courts are poised to revolutionize medical malpractice litigation: They would offer faster compensation to far more people, while restoring faith in the reliability of legal decisionmaking. But these benefits are, as some leading supporters have acknowledged, “hoped for, but untested.” The best evidence to answer that question comes, I suggest, from the Vaccine Injury Compensation Program (VICP) — a Program that employs very similar procedures to handle very similar claims and that had, at its birth, a very similar ambition.

Neurobehavioural effects of developmental toxicity - The Lancet Neurology Prospective epidemiological birth cohort studies make it possible to measure maternal or fetal exposures in real time during pregnancy as these exposures actually occur, thus generating unbiased information about the degree and timing of prenatal exposures. Children in these prospective studies are followed longitudinally and assessed with age-appropriate tests to show delayed or deranged neurobehavioural development. These powerful epidemiological methods have enabled the discovery of additional developmental neurotoxicants.