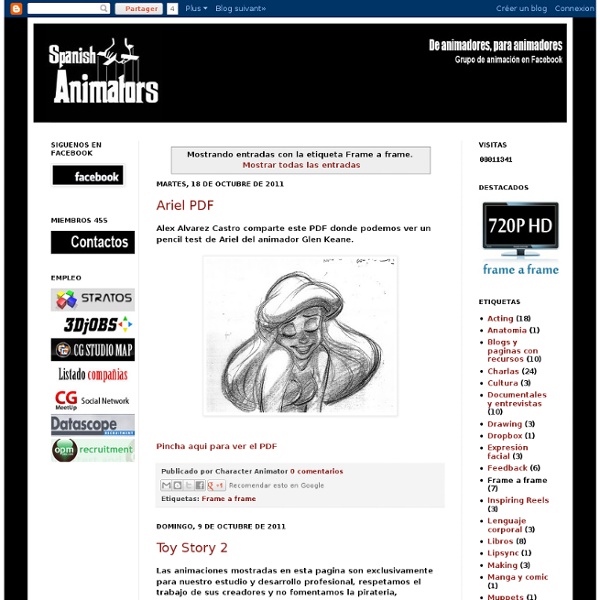 The Lozt Boyz: How I Study Animation If studying in school is essential to getting good grades, couldn't you say the same for creating good animation? If you truly want to have better animation, you need to study. More importantly, do you know HOW TO STUDY? When I was a kid, getting good grades never came easy to me. No matter how much I read through all the material, I would still do poorly on my tests. It wasn't until my Mom showed me HOW TO STUDY, that things changed. "WHY CAN'T MY STUFF LOOK LIKE THAT?" Then it hit me. "just because this works for me, it doesn't necessarily mean it will work for you."...because I'm dumb. SO LETS START STUDYING!!! In order to study, we need to study something. With every shot or every test I animate, I try to learn something new and get something out of it. For this demonstration I have selected a shot from the movie THE SECRET OF NIMH. My first group of questions are pretty standard. Can you give a brief description of the shot? If not a stand alone, what is the context of the shot? !!!

The Animation Garden Animation with a moustache Posted on March 17, 2014 | Leave a CommentFiled under Animation Having moved back to London to work on a really cool cartoony game I can’t talk much of for now, I am currently focusing on life drawing and painting most of my evenings. London is probably the only place in the world where Life drawing classes happen pretty much every day. For that reason, I decided to start a new blog and I will be posting all sort of useful information I come across on it and I might even post some of my drawings. Hopefully you might find some information helpful . I have a bit of experience with Life drawing, painting is something very new to me so if you are interested in the same topic, point your RSS reader to the following link, I will be posting all the great material I find useful in my learning. The blog look a bit rough around the edges but the content should easily compensate for the look in my opinion. Keep pushing yourself! I love the design of Krampus.

Comedy for Animators - Part 5 A note about “Gravity” Here is an inter­est­ing quote about the new film “Grav­ity” In an inter­view with Rene Rodriquez of the Miami Her­ald, direc­tor Alphonso Cuaron referred to a silent film comedian. I was chan­nel­ing Buster Keaton when we made Grav­ity — the sin­gle through-line story in which there is a lot of human­ity and emo­tion, but every­thing is con­veyed through phys­i­cal action. We just wanted to put on a really good show. I haven’t seen Grav­ity yet, but the more I hear about it the more inter­est­ing it becomes. This song makes everything funny Or maybe not. The song is “Yakety Sax” and is most famous from it’s use by Benny Hill. Youtube users have done exhaus­tive test­ing of the the­ory that it makes every­thing funny. “Sav­ing Pri­vate Ryan” with “Yakety Sax” is not funny. It has to be scenes with a chase or at least lots of run­ning. And it has to be sped up. Posted in Music Tagged music Prank Films When tele­vi­sion was young, the prank film returned.

The Power of Posing | ..::avneriginal::.. Head over to Vanity Fair for a great article by the photographer Howerd Schatz. He photographed actors at his studio in a series of roles and dramatic situations to reveal the essence of their characters. My top three are: GEOFFREY RUSHLeft: You’re the cornerman for a winded female boxer, desperately exhorting her: “She’s run away with your boyfriend! She’s kidnapped your kid! JOHN GOODMANLeft: You’re a geek flirting with a cheerleader, unaware that you don’t stand a chance. IAN McSHANELeft: You’re a politically ambitious prosecutor trying a sensational murder case, and you’ve just realized that the defense’s key witness has given you a huge opening to prove that he’s lying. Here are the rest of the images from the article.