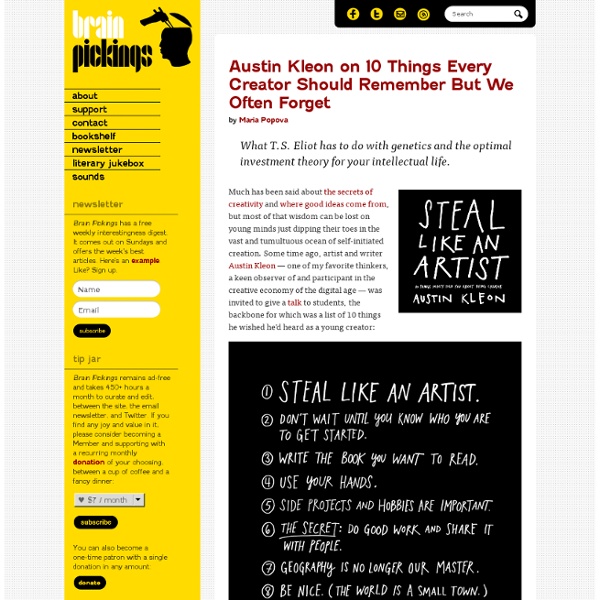 by Maria Popova What T.S. Eliot has to do with genetics and the optimal investment theory for your intellectual life. Much has been said about the secrets of creativity and where good ideas come from, but most of that wisdom can be lost on young minds just dipping their toes in the vast and tumultuous ocean of self-initiated creation. Some time ago, artist and writer Austin Kleon — one of my favorite thinkers, a keen observer of and participant in the creative economy of the digital age — was invited to give a talk to students, the backbone for which was a list of 10 things he wished he’d heard as a young creator: So widely did the talk resonate that Kleon decided to deepen and enrich its message in Steal Like an Artist — an intelligent and articulate manifesto for the era of combinatorial creativity and remix culture that’s part 344 Questions, part Everything is a Remix, part The Gift, at once borrowed and entirely original. The book opens with a timeless T.S. Donating = Loving

Uncommon Genius: Stephen Jay Gould On Why Connections Are The Key to Creativity by Maria Popova “The trick to creativity, if there is a single useful thing to say about it, is to identify your own peculiar talent and then to settle down to work with it for a good long time.” “Originality often consists in linking up ideas whose connection was not previously suspected,” wrote W. I. B. 344 Illustrated Flowcharts to Find Life's Big Answers by Maria Popova Flowcharting your way to happiness, or why you should be looking for people who intimidate you. From ever-inventive designer Stefan G. Bucher of You Deserve a Medal and Daily Monster fame comes 344 Questions: The Creative Person’s Do-It-Yourself Guide to Insight, Survival, and Artistic Fulfillment — a delightful pocket-sized compendium of flowcharts and lists illustrated in Bucher’s unmistakable style to help you figure out life’s big answers, in the vein of today’s inadvertent running theme of self-help-books-that-aren’t-really-”self-help”-books. Besides Bucher’s own questions, the tiny but potent handbook features contributions from 36 beloved cross-disciplinary creators, including Brain Pickings favorites Christoph Niemann, Stefan Sagmeister, Marian Bantjes, Doyald Young, and Jakob Trollbäck. Let’s be clear: I want this book to be useful to you.

Future - Technology - Cats, memes and internet schemes Why is the internet so obsessed with pictures of cats and is there more to them than meets the eye? “Oh hai. Welcom 2 dis weekz colum all bout teh peculiar fenomenon ov memez an teh internetz fascianashun wif kats.” That sentence probably puts you in one of two camps: someone who thinks the BBC’s standards have reached an all time low, or an aficionado of one of the most virally pervasive of all internet memes, the lolcat. For the uninitiated, lolcats are the near-numberless offspring of a venerable class of object: the “image macro”, in which text is superimposed on to a photograph.

Archivio » Regressive and Reflexive Mashups in Sampling Culture, by Eduardo Navas Grandmaster Flash on the Wheels of Steel some time in the early days of hip hop. Image source: greatestcities.com Update as of 8/13/10. The revised version of this text is now available online as Remix Theory post 444. Update as of 4/29/10: This text has been revised for the book publication Mashup Cultures. In the revised print version, I introduce a series of new terms along with a diagram. How to Be an Explorer of the World by Maria Popova “Every morning when we wake up, we have twenty-four brand-new hours to live. What a precious gift!” As a longtime fan of guerrilla artist and illustrator Keri Smith’s Wreck This Box set of interactive journals, part of these 7 favorite activity books for grown-ups, I was delighted to discover her How to Be an Explorer of the World: Portable Life Museum (public library) — a wonderful compendium of 59 ideas for how to get creatively unstuck by engaging with everyday objects and your surroundings in novel ways. From mapping found sounds to learning the language of trees to turning time observation into art, these playful and poetic micro-projects aren’t just a simple creativity booster — they’re potent training for what Buddhism would call “living from presence” and inhabiting your life more fully. It all began with this simple list, which Smith scribbled on a piece of paper in the middle a sleepless night in 2007:

Milton Glaser on Art, Technology, and the Secret of Life by Maria Popova “You learn more and more that everything exists at once with its opposite, so the contradictions of life are never-ending and somehow the mediation between these opposites is the game of life.” Few things today are truly iconic, but the I♥NY logo is among them. Publications Publisher Debate: How Private Exchanges Increase Inventory Control And Solve Channel Conflict 11/22 The debate among premium publishers and DSPs begs one simple question: “Will putting my inventory on an exchange cannibalize my direct sales efforts?” Those who “own” inventory are concerned that through exchanges, advertisers and trading desks have access to the same premium placements at lower CPMs, thereby diluting direct sales opportunities. As a premium publisher, you probably invest in a sales team to monetize your inventory.

Write-Brained: The Neuroscience of Writing and Writer’s Block This page provides an outline of what each part of the Write-Brained series will contain. You can bookmark and revisit this page for up-to-date links to each part. Preface: My Background and the Mandatory Disclaimer When I transitioned to full-time freelance work, my inability to complete work until the last minute before deadline was no longer just an inconvenience: It was the source of significant emotional and economic distress.