The Fabric of the Cosmos with Brian Greene: Watch the Complete NOVA Series Online 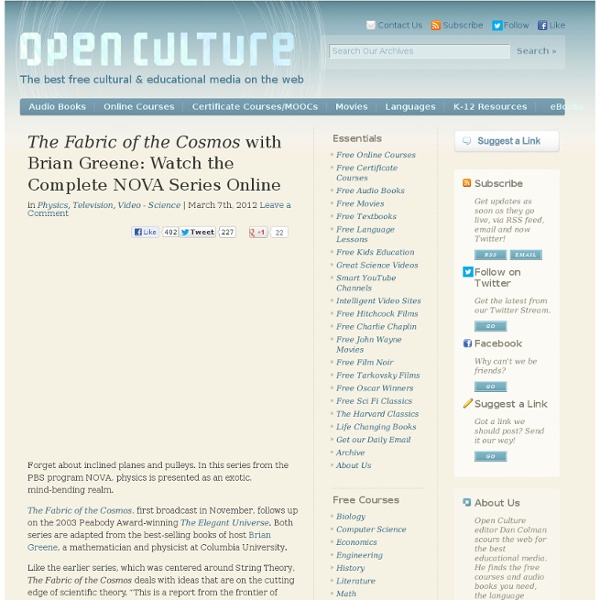 Forget about inclined planes and pulleys. In this series from the PBS program NOVA, physics is presented as an exotic, mind-bending realm. The Fabric of the Cosmos, first broadcast in November, follows up on the 2003 Peabody Award-winning The Elegant Universe. Both series are adapted from the best-selling books of host Brian Greene, a mathematician and physicist at Columbia University. Like the earlier series, which was centered around String Theory, The Fabric of the Cosmos deals with ideas that are on the cutting edge of scientific theory. “This is a report from the frontier of cosmic thought,” wrote Dennis Overbye last November in The New York Times, “as fresh as last month’s Nobel Prizes, uncompromising in its intellectual ambitions and discerning in its choice of compelling scientific issues. The series is arranged in four parts of approximately 50 minutes each. Related:  Theoretical astronomy

Introduction to Cosmology Cookies on the New Scientist website close Our website uses cookies, which are small text files that are widely used in order to make websites work more effectively. To continue using our website and consent to the use of cookies, click away from this box or click 'Close' Find out about our cookies and how to change them Log in Your login is case sensitive I have forgotten my password close My New Scientist Look for Science Jobs Cosmology Introduction: Cosmology Cosmologists study the universe as a whole: its birth, growth, shape, size and eventual fate. Einstein's perfect theory: General relativity rebooted FEATURE: 21:00 04 August 2014 From the first images of a black hole to exploring time before the big bang, we're in a new golden age for general relativity, says cosmologist Pedro Ferreira Galaxy mapper's first discovery: surprise space debris TODAY: 15:57 21 July 2014 White holes: Hunting the other side of a black hole FEATURE: 20:00 20 July 2014 Panning for dark matter in an Australian gold mine

Does the Universe Exist if We're Not Looking? | Cosmology The world seems to be putting itself together piece by piece on this damp gray morning along the coast of Maine. First the spruce and white pine trees that cover High Island materialize from the fog, then the rocky headland, and finally the sea, as if the mere act of watching has drawn them all into existence. And that may indeed be the case. While this misty genesis unfolds, the island's most eminent residentdiscusses notions that still perplex him after seven decades in physics, including his gut feeling that the very universe may be constantly emerging from a haze of possibility, that we inhabit a cosmos made real in part by our own observations. John Wheeler, scientist and dreamer, colleague of Albert Einstein and Niels Bohr, mentor to many of today's leading physicists, and the man who chose the name "black hole" to describe the unimaginably dense, light-trapping objects now thought to be common throughout the universe, turned 90 last July. Why does the universe exist?

Holes in Space Aug 21, 2008 Holes in Space In the gravitational model of the universe, "dark matter" attraction pulls galaxies into filaments. Birkeland currents could be a better explanation. "Not only has no one ever found a void this big, but we never even expected to find one this size," said researcher Lawrence Rudnick of the University of Minnesota. The hole isn't really a hole, it is an area of space where the temperature of the Cosmic Microwave Background (CMB) is lower than the surrounding region. Arno Penzias and Robert Wilson inadvertently discovered the CMB in 1965 in the now fabled experiment where they detected noise in the signal coming from a radio receiver they were building. The "noise" was later to be called the "remnant signal from the beginning of the universe" because it appeared to be radiating uniformly at a microwave frequency corresponding to a temperature of 2.7 degrees above absolute zero (-270.45 degrees centigrade). As author and EU theorist Wal Thornhill points out:

Theoretical astronomy Based on strict dictionary definitions, "astronomy" refers to "the study of objects and matter outside the Earth's atmosphere and of their physical and chemical properties"[1] In some cases, as in the introduction of the introductory textbook The Physical Universe by Frank Shu, "astronomy" may be used to describe the qualitative study of the subject.[2] Astronomy focuses on celestial objects, space, and the physical universe as a whole. Observations of the Sun, Moon, stars, and planets have formed the basis of timekeeping and navigation. Astronomy is a branch of science, but unlike other sciences, which have Earth-based laboratories in which controlled experiments are performed, astronomy has its labs located in the heavens far beyond the reach, let alone control, of the terrestrial observer.[3] "So how can one be sure that what one sees out there is subject to the same rules and disciplines of science that govern the local laboratory experiments of physics and chemistry?" [edit]

'Multiverse' theory suggested by microwave background 3 August 2011Last updated at 09:38 By Jason Palmer Science and technology reporter, BBC News The team has located possible "bubble universe" evidence in WMAP data The idea that other universes - as well as our own - lie within "bubbles" of space and time has received a boost. Studies of the low-temperature glow left from the Big Bang suggest that several of these "bubble universes" may have left marks on our own. This "multiverse" idea is popular in modern physics, but experimental tests have been hard to come by. The preliminary work, to be published in Physical Review D, will be firmed up using data from the Planck telescope. For now, the team has worked with seven years' worth of data from the Wilkinson Microwave Anisotropy Probe, which measures in minute detail the cosmic microwave background (CMB) - the faint glow left from our Universe's formation. 'Mind-blowing' Continue reading the main story “Start Quote End QuoteGeorge EfstathiouUniversity of Cambridge

Our Universe may be More Lonely than We Thought Image Credit: NASA Our universe just got a little bit smaller. Well, it didn’t physically shrink (that would violate several laws of physics); however, according to new research from Michigan State University, the cosmos isn’t nearly as populated as we previously thought. Ultimately, Hubble is way more than just an piece of expensive technology that we use to take pretty images of space—it has allowed us to peer into the deepest recesses of the cosmos and gain a better understanding of the universe that surrounds us. Despite its vast collecting capacity, ultimately, Hubble isn’t able to see the faintest and farthest galaxies. This shouldn’t be too surprising. In short, it seems that there may be far fewer galaxies roaming about the distant universe than we previously thought. This determination was made thanks to the Renaissance Simulations, which is a suite of extremely high-resolution adaptive mesh refinement (AMR) calculations of high redshift galaxy formation.