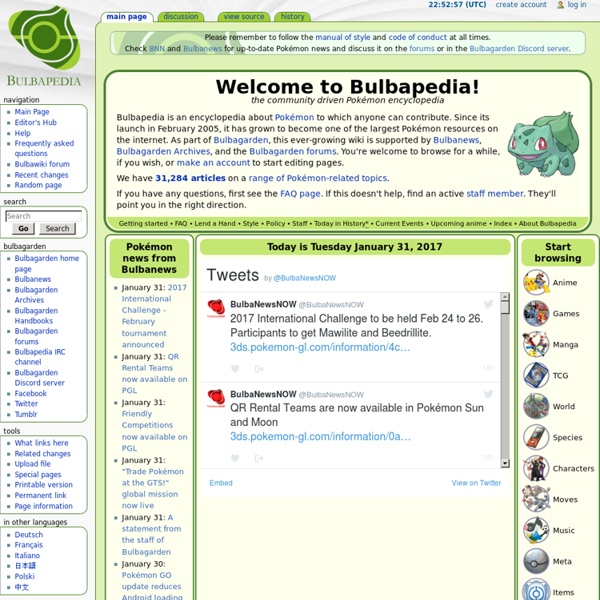 Donkey Kong Wiki Gold/Silver/Crystal Walkthrough Starting The Game Before you begin the game, there are a few things that'll happen. First, you see the intro, quite insteresting ones for Gold/Silver/Crystal. Then choose the "New Game" option. Body Has a Mind of Its Own: How Body Maps in Your Brain Help You Do (Almost) Anything Better: Sandra Blakeslee, Matthew Blakeslee This is an excellent book. The authors have a gift for making a complex subject understandable. Another plus is that, like the best of nonfiction authors, they stick to the subject and rely on facts rather than opinion. This book provides a wonderful introduction into an area of science formerly limited to neurologists and other highly-trained specialists. Central themeThe central theme of this book is that the brain maps the body. In fact, different areas of the brain contain different kinds of body maps with different functions.

Rukia Kuchiki Rukia Kuchiki (朽木 ルキア, Kuchiki Rukia) is the lieutenant of the 13th Division under Captain Jūshirō Ukitake. Rukia is the adoptive sister of Byakuya Kuchiki and a friend of Ichigo Kurosaki. Appearance Short and petite, Rukia has light skin and violet-colored eyes. Her hair is black, with several strands of hair always hanging between her eyes. Byakuya has stated she strongly resembles her sister, Hisana Kuchiki.[2] As a Shinigami of the Gotei 13, Rukia wears a standard shihakushō. 17 months after Aizen's defeat, Rukia wears her hair cropped into a bob which hangs about her face.

Play Pokemon - Silver Version online at playR! Overview The box art for Silver. Pokemon Gold and Silver were released on October 14, 2000 in North America (November 21, 1999 in Japan and April 6, 2001 in Europe) for the Game Boy (although it also supported the Super Game Boy and Game Boy Color). Development was done by Game Freak, publishing by Nintendo, and marketing and licensing from The Pokemon Company. Taking place in the Johto region, the second generation of Pokemon introduced 100 new Pokemon.

A visual history of the videogame age 1971-1984 by Van Burnham. MIT press, 2001 by van burnham It was a time when technology was king, status was determined by your high score, and videogames were blitzing the world... From Pong to Pac-Man, Asteroids to Zaxxon, over fifty million individuals have come of age within the electronic flux of the videogame evolution -- their subconscious forever etched with images projected from arcade and home videogame systems around the world. From the first blips of electronic light at Brookhaven National Labs and the creation of SPACEWAR! at the Massachusetts Institute of Technology, to the invention of the revolutionary "Brown Box" and the myriad systems of Magnavox, Atari, Coleco, and Mattel that followed. Through the rise of the golden age of videogames and forward into the imagination of millions -- SUPERCADE is the first book to illustrate and document the history, legacy, and visual language of the videogame phenomenon.

Ichigo Kurosaki After scaring some skateboarders away from a dead girl's resting place, Ichigo, apologizing to her, promises to bring her some new flowers to replace those damaged by the skaters, telling her to go to heaven quickly.[64] That evening, Ichigo, seeing Rukia Kuchiki in his bedroom, initially mistakes her for a burglar, but when Ichigo realizes only he can see the intruder, he accepts Rukia is a ghost. When he refuses to believe her explanation about Shinigami, Rukia binds him with Kidō. As a Hollow attacks the house, Ichigo, upon hearing his sister's pleas for help, breaks free and rushes to stop the Hollow.[65] Surprised at its monstrous appearance, Ichigo charges at it with a baseball bat in an attempt to release the captive Yuzu. Rukia frees Yuzu, but Ichigo's reckless actions force Rukia to shield him with her body, severely injuring her.

Suburb - The Urban Dead Wiki From The Urban Dead Wiki A Suburb is a named 10 block by 10 block subsection in the city of Malton. There are 100 suburbs in Malton, arranged in a 10 by 10 grid. In the game, the suburb you are in is given at the top of the 3x3 map showing your immediate environment. There is no special procedure for moving from one suburb to another - simply keep walking and you will find yourself in a new suburb. If your map has fewer than nine squares, you are at one of the boundaries of Malton itself, not simply the boundary of a suburb.

American Amusement Machine Association v Kendrick American Amusement Machine Association, et al. v. Teri Kendrick, et al., 2001 U.S. Enderman Endermen are three-block-high mobs that spawn fairly uncommonly in the Overworld at light levels of 7 or less, and they densely populate The End. Endermen are neutral, but they will turn hostile when provoked. They are known for their spooky presentation, their unique abilities to pick up blocks and teleport, their vulnerability to water, and the odd noises they make.

City of Tigard > Library > Teens DIY TechnARTology Show March 1–31 • Teens in grades 6 and up Submit your work to our technology-themed art show curated by the Teen Library Council. Stop by the library to pick up a submission form or download one here. Submit work in any of three categories: