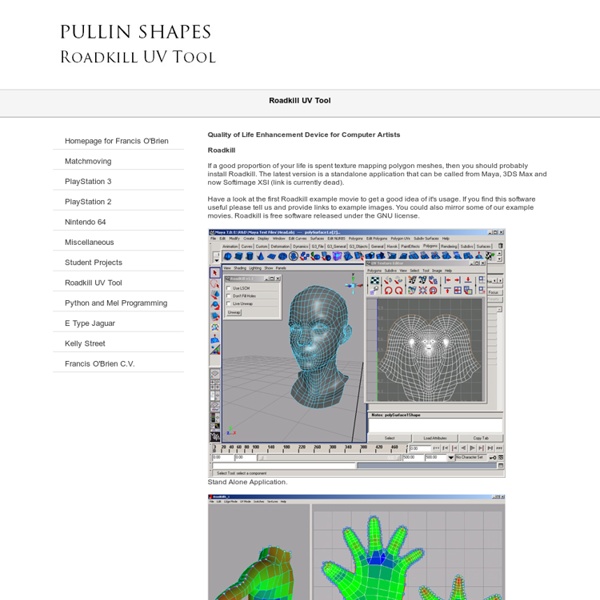 Quality of Life Enhancement Device for Computer Artists Roadkill If a good proportion of your life is spent texture mapping polygon meshes, then you should probably install Roadkill. The latest version is a standalone application that can be called from Maya, 3DS Max and now Softimage XSI (link is currently dead). Have a look at the first Roadkill example movie to get a good idea of it's usage. Stand Alone Application. Load and Save OBJ files, Live Unwrap, Live Pin and Pull, Show Polygon Stretching, Topological and Loop Edge Selection. Roadkill 1.1 Manual by Andy Swann (please mail me if you spot any errors) Roadkill workflow with Poser by English Roadkill 1.1 (RC2) PC Source Installation After downloading unzip all the files to a directory. Typing RoadKill (capital R and K!) Softimage XSI A.

Ten24 - Human Photo Reference and Textures for 3D artists - Catagory Reference / Training This the first in a long line of photographic reference libraries that were going to be offering. Shot using the latest canon EOS 5D Mark 2, this collection offers far more than just simple texture reference each photograph has been processed to remove unwanted reflection highlights, although we are aware that these are useful for creating bump and spec maps so we have supplied both versions of the image. We have also created a set of modelling sheets featuring fully aligned reference, perfect for use as modelling backdrops. Also included is a set of huge full body 50 mega pixel images. Download Contact Sheet Download full resolution samle 3728 x 9338 px

Softimage Mod Tool We regret to inform you that the upcoming 2015 release will be the last one for Softimage® software. This final version is expected to ship on or around April 14, 2014. Autodesk will continue to offer product support until April 30, 2016. We will also provide Softimage support services (including Hot Fixes and Service Packs) to all Softimage customers with Autodesk Subscription, at no cost, until April 30, 2016. We understand that you will now need time to re-evaluate your production capabilities. Although this decision is a difficult one, we do believe that by focusing our development efforts, we can better serve the needs of the media and entertainment industry and provide customers with better products, faster. What is happening to Softimage? Softimage last release announcement FAQ Support for prior releases Customers with an active Autodesk Softimage Subscription contract can migrate to the latest release of either Maya or 3ds Max, at no additional cost.

Polygon hair – Making of Pink Assassin - Computer Graphics | Computer Graphics On this project I used C4D for modeling and scene setup, ZBrush for sculpting and texture painting as well as fryrender for material creation and rendering. I also used the plug ins “paintonsurface” and “splinespread” for C4D. My intention was to create a character with personality, who looks like she had lived, and tell a story just through her face and not through accessories. For the head and the upper body I used common box modeling (no special techniques here), and did a retopo for the clothes with paintonsurface to get an even mesh of quads. The zipper has been modeled in a very simple way with primitive nurbs objects. Mainly I used for sculpting the standard, flatten, clay, smooth and move brush. While all this work you should always have photo references in sight. The next step was to create the textures for her face. Once I’m happy with my base, I export this as texture at maximum resolution. The next Maps I needed were specular and roughness maps.

MeshLab Human Skin - the Mental Ray Subsurface Scattering Fast Skin shader by Philippe Le Miere Subsurface scattering is light passing through and diffusing within a thin translucent material. Human skin is an example of such a material as it is made up of many thin translucent layers. A Subsurface Scattering material is ideal for re-creating skin in 3D computer graphics and is why the Mental Ray Subsurface Scattering Fast Skin shader was specifically created. Ordinary Shaders To compare the benefits of using the SSS Fast Skin shader, a model of the human head was set-up with a three point lighting system and a Phong material. The result is a plastic like artificial look due to the harshness of the shadows. The model has been setup to use three Mental Ray area lights, as they produce softer shadows. The default SSS Fast Skin Shader Before attempting to recreate any material it is always good to have a reference image handy. Applying the SSS Fast Skin shader with the default settings produces a wax like material. Scale Conversion next page >

insight3d Character Assets Update #3: "Picatinny" Rail Creation - Video Parts 1, 2, 3 Since the release ZBrush 4R4, we've presented more than 20 ZClassroom videos that are available at ZClassroom at Pixologic.com. We are delighted to add to this list another set of movies created by ZBrushCentral member Joseph Drust aka Piggyson.About Joseph DrustJoseph has over ten years of experience working in the video game industry as a character artist with a focus on modeling and sculpting. He has created character assets for games including Ghost Recon, Splinter Cell: Pandora Tomorrow, Ben 10 Alien Force, Earth Defense Force: Insect Armageddon, and most recently Ghost Recon Future Soldier.Joseph currently works as a lead character artist for Ubisoft Entertainment (Red Storm Entertainment) in Cary, North Carolina. Joseph is also a beta team member for Pixologic's ZBrush and a certified ZBrush Instructor.