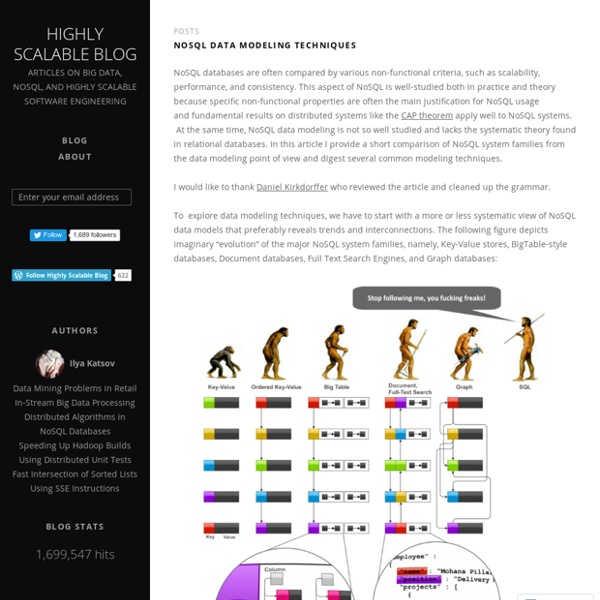 NoSQL databases are often compared by various non-functional criteria, such as scalability, performance, and consistency. This aspect of NoSQL is well-studied both in practice and theory because specific non-functional properties are often the main justification for NoSQL usage and fundamental results on distributed systems like the CAP theorem apply well to NoSQL systems. At the same time, NoSQL data modeling is not so well studied and lacks the systematic theory found in relational databases. In this article I provide a short comparison of NoSQL system families from the data modeling point of view and digest several common modeling techniques. I would like to thank Daniel Kirkdorffer who reviewed the article and cleaned up the grammar. To explore data modeling techniques, we have to start with a more or less systematic view of NoSQL data models that preferably reveals trends and interconnections. Key-Value storage is a very simplistic, but very powerful model. Conceptual Techniques

What the heck are you actually using NoSQL for? It's a truism that we should choose the right tool for the job. Everyone says that. And who can disagree? The problem is this is not helpful advice without being able to answer more specific questions like: What jobs are the tools good at? Will they work on jobs like mine? Is it worth the risk to try something new when all my people know something else and we have a deadline to meet? Ruby on Rails Tutorial: Learn Rails by Example book and screencasts by Michael Hartl Michael Hartl Contents Foreword

NoSQL "Structured storage" redirects here. For the Microsoft technology also known as structured storage, see COM Structured Storage. A NoSQL (often interpreted as Not Only SQL[1][2]) database provides a mechanism for storage and retrieval of data that is modeled in means other than the tabular relations used in relational databases. JOINs via denormalization for NoSQL coders, Part 2: Materialized views - Web development blog Thomas Wanschik on September 27, 2010 In part 1 we discussed a workaround for JOINs on non-relational databases using denormalization in cases for which the denormalized properties of the to-one side don't change. In this post we'll show one way to handle JOINs for mutable properties of the to-one side i.e. properties of users. Let's summarize our current situation: We have users (the to-one side) and their photos (the to-many side)Photos contain their users' gender in order to use it in queries which would need JOINs otherwise

Guidelines for Modeling and Optimizing NoSQL Databases - LaunchAny eBay Architect Jay Patel recently posted an article about data modeling using the Cassandra data store. In his article, he breaks down how they modeled their data using Cassandra, how they approached the use of Columns and Column Families, and query optimizations. The post is very detailed and a great read. What I enjoyed most from the article was more of the high-level approach that Jay and his team took. Here are my favorite takeaways from their approach to data modeling and query optimization, that I believe can be applied to any NoSQL database, including Cassandra, MongoDB, Redis, and others. Designing a Secure REST (Web) API without OAuth Situation You want to develop a RESTful web API for developers that is secure to use, but doesn’t require the complexity of OAuth and takes a simple “pass the credentials in the query” approach… or something equally-as-easy for people to use, but it needs to be secure. You are a smart guy, so you start to think… Problem You realize that literally passing the credentials over HTTP leaves that data open to being sniffed in plain-text; After the Gawker incident, you realize that plain-text or weakly-hashed anything is usually a bad idea. You realize that hashing the password and sending the hash over the wire in lieu of the plain-text password still gives people sniffing at least the username for the account and a hash of the password that could (in a disturbing number of cases) be looked up in a Rainbow Table.

Kyoto Cabinet: a straightforward implementation of DBM Copyright (C) 2009-2012 FAL Labs Last Update: Fri, 04 Mar 2011 23:07:26 -0800 Overview BIG Data Analytics Pipeline "Big Data Analytics" has recently been one of the hottest buzzwords. It is a combination of "Big Data" and "Deep Analysis". The former is a phenomenon of Web2.0 where a lot of transaction and user activity data has been collected which can be mined for extracting useful information. The later is about using advanced mathematical/statistical technique to build models from the data.

Shiny - Tutorial The How to Start Shiny video series will take you from R programmer to Shiny developer. Watch the complete tutorial here, or jump to a specific chapter by clicking a link below. The entire tutorial is two hours and 25 minutes long. Part 1 - How to build a Shiny app Storing Hierarchical Data in a Database Article Now, let’s have a look at another method for storing trees. Recursion can be slow, so we would rather not use a recursive function. We’d also like to minimize the number of database queries. Preferably, we’d have just one query for each activity. We’ll start by laying out our tree in a horizontal way. Start at the root node (‘Food’), and write a 1 to its left.