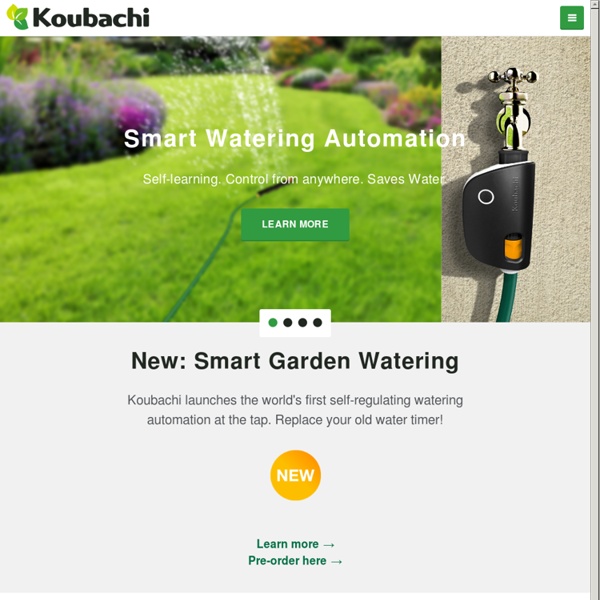 Talk to Me, One Machine Said to the Other The promise is more than a marketing boast. Aided by microchip transmitters, heat sensors and a fast-growing form of wireless communication, the boast is a measurable fact. Inside each Ocado delivery van is a SIM-card module the size of a postage stamp that monitors the air temperature. The sensor sends data to a computer used by fleet managers back at headquarters near London every few minutes. Ocado says incidents of spoilage of goods have declined since the transmitters were installed last year. Games Sphero Macrolab Create easy, repeatable programs and macros for Sphero. Arrange simple commands and settings in any combination you choose to let Sphero drive autonomously, follow unique patterns, and more, all while learning basic programming. Play your commands, save favorites, and even share them with friends. Google PlayiTunes orBasic for Sphero

Great Last Minute Urban Gardener's Holiday Gifts It’s the Holidaze, and you may have waited till the bitter end as I have. For your garden and green-loving friends and family who may be short on space, here are some cool last minute gifts that I love either for their utility, design, wit, or a combination of all those elements: 1. Liquid Cardboard (above) Equal parts vase and plaything, this amazing contraption contorts into myriad shapes. Cars Are The Next Playground For App Developers This year’s CES may have been about startups more than ever before, but over the last few years, the car industry has also increased its presence at the show. In previous years, we heard a lot about the connected car, but until now, those cars remained virtually closed to developers. In one fell swoop, that changed this year, as Ford and GM announced concrete programs with SDKs and APIs that are either already open for developers or will be available within the next few months. The approach the two companies are taking is very different: Ford is betting on drivers bringing their own smartphones into the car and having apps run on the phone, while GM is actually setting up a framework for running apps right in the car’s built-in infotainment system.

LUMOback: The Smart Posture Sensor by Monisha Perkash LUMOback is a wireless posture sensor and mobile app that leverages great design, proven science, and the latest advances in mobile computing. The sensor provides a gentle vibration when you slouch to remind you to sit or stand straight. It is worn on your lower back and designed to be slim, sleek and so comfortable that you barely feel it when you have it on. The sensor connects wirelessly to an iPhone 4S or new iPad app which tracks all of your movement data. LUMO, your avatar, mirrors your activities when you sit, stand, walk, run, lay down, and more! Anyone can use LUMOback.

Internet of Things and Kickstarter - Internet of Things News Internet of Things and Crowdfunding Kickstarter and other crowdfunding platforms are quickly becoming the first stop for Makers and hardware manufacturers to test their product concept on the market, cover bulk upfront supplier costs, and bring their connected products to life. Twine, the sensor block system developed by Supermechanical was the first web enabled product to be a breakout hit raising over half a million dollars in early January, and the Pebble watch blew through Kickstarter's old funding records by raising more than $10 million during its month-long campaign.Below we take a look at some of the successful (and a few not so successful) Internet of Things related projects that are driving this trend and where they currently stand in their development process. // Ongoing Campaigns Unsuccessful in their funding: Will these projects turn into viable companies?

Auto Advertising Startup adverCar Raises $2M From Canaan Partners, 1-800-Flowers, And Others AdverCar, a startup promising to make it easy for drivers to turn their vehicles into rolling advertisements, has raised a $2 million seed round. The funding was led by Canaan Partners, with participation from 1-800-Flowers, Branford Castle Private Equity, New Orleans Startup Fund, Jit Saxena, and the TiE Angels Boston. 1-800-FLOWERS CEO Jim McCann and Canaan partner Deepak Kamra are joining adverCar’s board of directors. Founder and CEO Neil Turner said there are other companies offering to wrap cars in advertising, but only adverCar has a solution that’s easy and affordable for advertisers. Wrapping a car in ads costs thousands of dollars, whereas adverCar mounts its ads as easily removable stickers that are the same size as standard ad units, and it charges around $280 for a monthlong campaign. That’s the same price as advertising on a cab, Turner said. Turner also pitched adverCar as a way to bring the kind of audience targeting found in the digital world to out-of-home advertising.

Magdalen Court School Garden Design Competition The school runs a mini garden design competition each year, here are a few ideas to spark the children's imagination NFC Enabled Clothes While looking around for ways for Near Field Communication (NFC) devices to become part of our lives it is interesting to note that no one seems to have thought of clothing. Apparel is a perfect fit (pun intended) for NFC technology because it requires a close proximity in order to work. While the Emperors new suit was a set of clothing created by vanity, NFC could offer some interesting biometric integration if it was in our clothes.

Enjoy Your Food with HAPIfork by Jacques LÃ©pine Eating too fast leads to poor digestion and poor weight control. The HAPIfork, powered by Slow Control, is an electronic fork that helps you monitor and track your eating habits. It also alerts you with the help of indicator lights and gentle vibrations when you are eating too fast. Every time you bring food from your plate to your mouth with your fork, this action is called: a "fork serving".

Building Internet of Things Thomas Amberg from Yaler together Marc Pous with have built the amazing #OktoberfestOfThings, an IoT-enabled beer mug that can count how often and how much beer the holder consumes during the famous Octoberfest in Munich, Germany! The initial design has used an Arduino Nano, a BlueSMiRF-RN-v1 Bluetooth module and a Nexus S Android phone running a Bluetooth to Internet gateway app. They are using an ADXL335 accelerometer and a tilt switch to count sips. (Although it seems they initially came with much cooler ideas on that). Data has been posted on Cosm.com: You can check more photos of the mug and the construction, as well as real-field testing here.

E La Carte Releases More Powerful Version Of Customized Tablet For Restaurants E la Carte, a company that develops a tableside tablet for the restaurant and related hospitality industries, is debuting a brand new version of its hardware for restaurants. As we’ve written in the past, E la Carte launched Presto earlier this year to bring user-friendly tablets to restaurants to bring efficiency to the tableside and ordering experience. The 7-inch tablet includes a digital menu that lets you sift through the restaurant’s food and drink selection via photos and detailed descriptions using a touch-screen interface. There’s also a section for payments and games, including trivia and a drawing app. The new tablet has been completely reformatted for restaurant use.

Madhouse Family Reviews !: Giveaway #336 : Win 3 x Henri Le Worm ipad apps and aprons - closed - winners Jayne Underwood, Jo Glasspool & Susan Griffiths This half term, join Henri Le Worm, the world’s greatest chef, and his friends Derek the Ladybird, Sebastian the Slug and Texas Lou the Spider in his new and unique app to discover more about food, ingredients and nature! Henri Le Worm is a beautifully animated story app narrated by actor Simon Pegg and has over 100 fun and educational food facts, more than 30 amazing facts about bugs and insects, as well as 10 easy to make recipes by the world-renowned chef Raymond Blanc. (You can see our review of the app and the fabulous grilled peaches that the Madhouse Mini-testers made here.) Perfect for keeping the kids entertained this half term, this interactive app encourages children to learn about food, recipes and nature using exciting games, facts and music. Children can learn to prepare meals by using the 10 yummy recipes while enjoying Henri’s toe-tapping sing along song. Watch out for educational and seasonal updates and look forward to more apps from Henri Le Worm.