The Science of Food and Drink 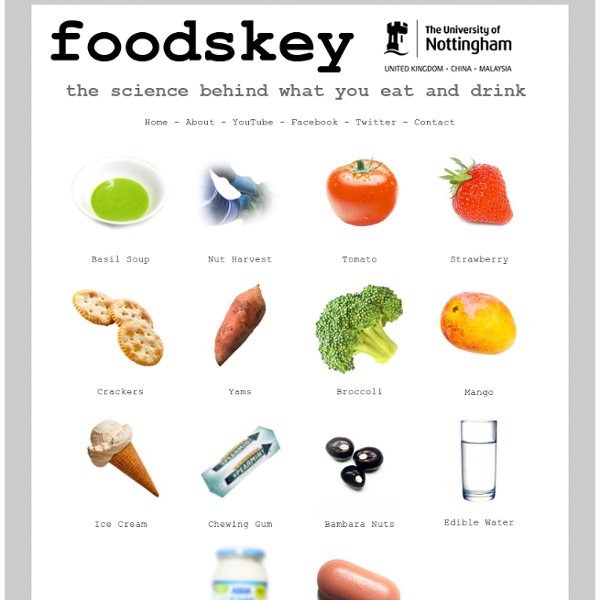 CK-12 People's Physics Concepts 1. Units and Problem Solving Units identify what a specific number refers to. The Complete List of iPad Tips, Tricks, and Tutorials The Apple iPad is an amazing tablet, and to help you get the most out of it, we’ve put together a comprehensive list of every tip, trick, and tutorial for you. Read on for more. Note: This article was originally published earlier this year, but we’ve updated it with a real lot more content since then, so we’re republishing it for you. We’ll be keeping this page updated as we find more great articles, so you should bookmark this page for future reference. How to Maximize Your iPad’s Battery Life

Blood - we can't live without it! blood; plasma; blood cells; blood types; blood transfusion; platelets; immune system; anaemia; clotting; bleeding; serum; antibodies; A; B; AB; O; antigens; rhesus; rh+; rh-; iron; periods ; Contents Blood is the fluid that keeps our bodies going. It is a transport system that carries oxygen and the essential chemicals to where they are needed in the body. At the same time it picks up the waste that the different parts of the body no longer need and delivers that waste to whichever part of the body is responsible for getting rid of it. It helps us fight infections and keep our body healthy. A Science Teacher Shares Tech Resources For Teachers, Parents & Students I teach Middle School Science, mainly physical, environmental, and life to 6th and 8th graders. Through grants I have acquired 14 iPads for my students to use everyday. Students are also welcome to use their own handheld devices or smartphones.

Search edshelf Filter by Price Age Subject: Computers Platform Category Quizlet Flashcards Khan Academy Video Content iTunes U Online Courses instaGrok Educational Search Bones: They’re alive! Without bones, your body would be a slippery bag of organs. But the stiff models of a skeleton that you’ve seen in science class (or as Halloween decorations) tell only half the story. That’s because “the skeleton does more than just hold you up,” explains Laura Tosi Bones are made of living, breathing cells. And they play all sorts of important roles, says Tosi, who directs the Bone Health Program at Children’s National Medical Center in Washington, D.C. Tiny ear bones conduct sounds that help us hear. Bone marrow — a soft, jellylike substance that fills the hollow interior of the body’s long bones — produces blood cells, both red and white.

50 Awesome Chemistry Videos For The Busy Science Teacher Though we don’t often recognize it, chemistry defines nearly every element of our everyday lives. From the reactions that fuel the sun to the biology of our bodies to the technology in our gadgets, chemistry is at the heart of everything we do and is the central science that unites biology, physics, geology, astronomy, medicine, and countless other fields. Yet chemistry doesn’t always get the credit and recognition it deserves for playing such an awesome role in, well, everything. If you’ve been slighting chemistry, there’s no better time to give the field the credit it deserves than National Chemistry Week. Founded in 1987, the week-long event has helped bring awareness to the role chemistry plays both in our lives today and in our future.

Charming talks for a boost on a bad day Now playing All under the age of 16, brothers Jonny, Robbie and Tommy Mizzone are from New Jersey, a US state that's better known for the rock of Bruce Springsteen than the bluegrass of Earl Scruggs. Nonetheless, the siblings began performing bluegrass covers, as well as their own compositions, at a young age. Here, they play three dazzling songs in three different keys, passing the lead back and forth from fiddle to banjo to guitar. Hands-on Activities for Teaching Biology to High School or Middle School Students by Drs. Ingrid Waldron and Jennifer Doherty, University of Pennsylvania The expression "hands-on, minds-on" summarizes the philosophy we have incorporated in these activities - namely, that students will learn best if they are actively engaged and if their activities are closely linked to understanding important biological concepts.

Swedish divers unearth a 'Stone Age Atlantis': 11,000-year-old ancient settlement discovered under the Baltic Sea Divers found a harpoon, tools, horns and the bones of ancient cattle The bones belonged to the animal auroch last seen in the early 1600sArchaeologists believe these relics date back to the Stone AgeIt is said to be the oldest settlement in the area - dubbed Sweden’s 'Atlantis' By Victoria Woollaston Published: 16:06 GMT, 27 January 2014 | Updated: 17:16 GMT, 27 January 2014 Divers in Sweden have discovered a rare collection of Stone Age artefacts buried deep beneath the Baltic Sea. Archaeologists believe the relics were left by Swedish nomads 11,000 years ago and the discovery may be evidence of one of the oldest settlements ever found in the Nordic region. Some of the relics are so well preserved, reports have dubbed the find 'Sweden’s Atlantis' and suggested the settlement may have been swallowed whole by the sea in the same way as the mythical island in the Atlantic Ocean.

Physics To Go: Explore Physics on your own image credit: U.S. Air Force; image source; larger image Newton's 3rd Law What is the purpose of the small rotor on the back of this helicopter? In fact, it's needed because of Newton's third law--for every action force there is an equal and opposite reaction.

Dr. Robert Schoch and Alternative Human History E.I.R.S. has teamed up with Geologist and University Professor Dr. Robert Schoch in our research efforts of Alternative World History. Our true human history is slowly coming to discovery through the extensive researches of geologists and geophysicists like Robert Schoch. Evidence points to civilizations existing thousands of years beyond what our school books say they do. Lichtenwalner, Megan (Science) / Biology Keystone Exam Resources Starting with the class of 2017, a graduation component of any Pennsylvania public school will be passing specific Keystone exams. These exams are designed to make sure that students are meeting state standards. Starting with the 2012-2013 school year, Council Rock School District will be administering the Algebra I, Literature, and Biology Keystone exam.

Ancient Sumerians In Ecuador: The Father Crespi Mystery… In the Amazonian Ecuadorian region called Morona Santiago there is a very deep cavern, known in Spanish as Cueva de los Tayos (Cave of the Oilbirds). According to some researchers the true discoverer of the huge archaeological treasures of the Cueva de los Tayos was not the Hungarian Juan Moricz, but rather the Salesian priest Carlo Crespi (1891-1982), a native of Milan, Italy. Carlo Crespi, who arrived to the Amazonian Ecuador area of Cuenca in 1927, was able to win the trust of the natives Jibaro, and so they did deliver to him, over decades, hundreds of fabulous archaeological pieces dating back to an unknown time, many of them made of gold or golden, often masterfully carved with archaic hieroglyphs that, to date, no one has been able to decipher. From 1960 Crespi obtained from the Vatican the permission to open a museum in the city of Cuenca, where was located his Salesian mission.