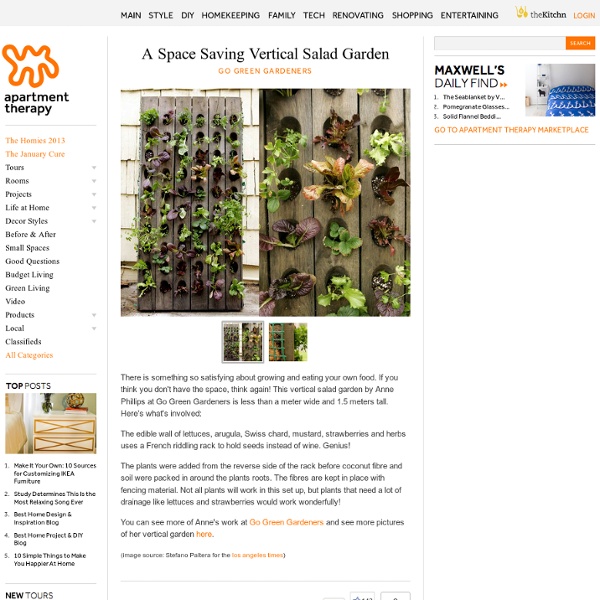 Ten Mistakes New Herb Gardeners Make (and How to Avoid Them!) So you're thinking of herb gardening, or maybe you tried it last year and it was an utter disaster? Have no fear. There are a few simple mistakes that many herb newbies make (and I know, because I made most of 'em myself). Master these simple and practical tips for herb gardening and you'll be using your own fresh herbs like Mario Batali in no time. Fresh herbs are one of the greatest ways to increase the taste of your food healthfully. Let it be known that I have the blackest of thumbs. It surprises me how often I bump into friends who are flummoxed about some aspect of herb gardening. Mistake 1: Growing from seed. Mistake 4: Not cutting early and often. Mistake 5: Taking the leaves from the wrong place. Mistake 6: Letting your plants get too randy.

The Sámi form Finland’s first nation - thisisFINLAND: Life & society: Society By Andy Kruse, October 2012 Photo: Marja Vuorelainen/Encyclopaedia of Sámi Culture A Sámi child in traditional clothing practices reindeer roping skills on a set of antlers. Where does the story of the Sámi, Finland’s indigenous people, begin? With the ice gone, the sun warmed the ground and plants began to grow. Photo: Maantieteen Retkikunta/Encyclopaedia of Sámi Culture Sámi men pause from their work to pose for a photograph that has since become part of history. The first evidence of human presence in Finland comes from the southeast and dates to around 10,500 years ago. Existence was tough in the arctic climate, but these early humans adapted well to their environment. Inland, they hunted reindeer, moose, bear, rabbit, beaver and fowl. Reindeer flow Photo: Kaisa Siren/Lehtikuva Locals in northern Finland gather as a herd of reindeer is corralled. The indigenous people of Finland, now called the Sámi, descended from those early inhabitants. Encountering challenges Language and land Links

DIY Natural Room Scents Don't miss my follow-up post to this one withNATURAL ROOM SCENTS FOR DIY GIFTS & CENTERPIECESCLICK HERE This post was featured in the April 2013 issue of Woman's Day magazine. Here's the thing. I'm married to a man who hates artificial scents of any kind. Turns out that King-Man may just be ahead of his time. But, the air in my house gets stale sometimes. There is a simple, all natural, truly lovely solution. Keeping the supply list simple. How to Make Natural Room Scents Fragrant items for naturally scenting your home: citrus -- I've tried other fruits. view whole spices on Amazon: cinnamon sticks, anise stars, allspice, cloves, vanilla beans Five Natural Room Scent RecipesThese are all scents that my nose likes. General procedure: Combine the ingredients in a 2 cup (pint) jar or container, or in a pan on the stove top. view on Amazon: ♦pint jars ♦plastic lids for jars Scent #1: Oranges, cinnamon & cloves (allspice and anise are optional). Scent #2: Lemon, rosemary, & vanilla. Gift them!