How encryption works in your web browser 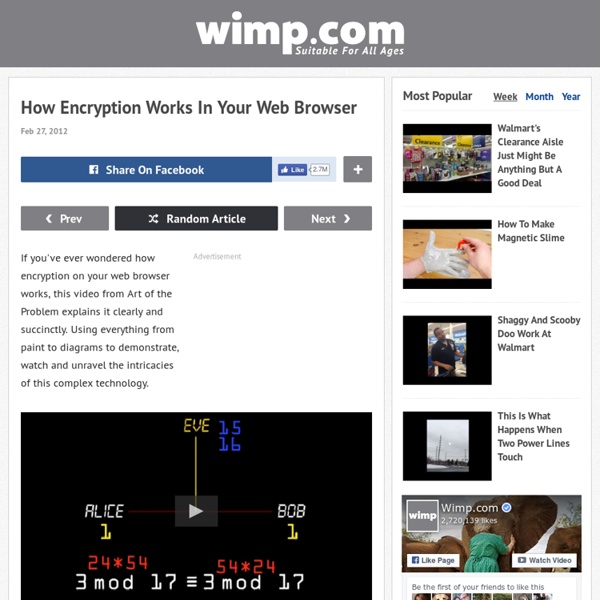 SCADApedia A blog is great for providing current information, but this information tends to age off and lose value over time. Our answer to this problem is the SCADApedia. The SCADApedia is a set of pages covering topics of importance in ICS and control system IT. The best way to use it is either by the search feature in the web site or by clicking on the top level category links listed below. Married Man Sex Life The Blue Pill is the lie. The Blue Pill is the avalanche of marriage and dating advice that’s out there. There’s been books, movies, magazines, TV shows, seminars and sermons telling you how relationships should be. There’s what your parents brought you up to believe, what your friends told you and what she said she wanted to be happy. There’s been over fifty years of professional help from doctors, psychologists, counselors, teachers, ministers and more……and the divorce rate has never been higher.

Search WikiLeaks 2. Act normal If you are a high-risk source, avoid saying anything or doing anything after submitting which might promote suspicion. In particular, you should try to stick to your normal routine and behaviour. Why Nice Guys and Gals Finish Last in Love Welcome back to The Attraction Doctor I received a lot of good feedback on my last article discussing How I Learned to Have a Satisfying Relationship . The messages of taking personal responsibility to become a valuable mate, learning to make others trade fairly, and finding internal validation, all seemed to make a connection with readers. Derbycon 2015 - Blue Team Starter Kit Description: A look at some of the low-cost tools that can be utilized by Blue Team members. Tools include Redline for forensics, EMET for computer hardening, Zed Attack Proxy for web application security, and PDQ Deploy and Inventory for third party patch management. Descriptions of each tool, experiences and how I've used each of these tools, and short demos of each tool. U.S. Navy Veteran 2001-2007 Sysadmin, network administrator, now information security officer for state of South Carolina.

Spacetime In non-relativistic classical mechanics, the use of Euclidean space instead of spacetime is appropriate, as time is treated as universal and constant, being independent of the state of motion of an observer. In relativistic contexts, time cannot be separated from the three dimensions of space, because the observed rate at which time passes for an object depends on the object's velocity relative to the observer and also on the strength of gravitational fields, which can slow the passage of time for an object as seen by an observer outside the field. Until the beginning of the 20th century, time was believed to be independent of motion, progressing at a fixed rate in all reference frames; however, later experiments revealed that time slows at higher speeds of the reference frame relative to another reference frame. Such slowing, called time dilation, is explained in special relativity theory. Spacetime in literature[edit]

Brandieself added: March, 2015 A lot of people contact us and ask: What are your preferred tools for Pentesting and which ones are free? Whilst there are hundreds and thousands of free Pentesting tools around, we seem to use only a core bunch of them as many have similar functionality. Some people may prefer one tool over another, but the bottom line is: There are many tools to achieve the same goal. Here is our personal list of preferred tools, which does by no means indicate that those are the only ones to use. Scanning 99 Resources to Research & Mine the Invisible Web College researchers often need more than Google and Wikipedia to get the job done. To find what you're looking for, it may be necessary to tap into the invisible web, the sites that don't get indexed by broad search engines. The following resources were designed to help you do just that, offering specialized search engines, directories, and more places to find the complex and obscure. Search Engines Whether you're looking for specific science research or business data, these search engines will point you in the right direction.

Send Anonymous Emails: 20 Sites To Keep Your Identity Hidden The first question to answer here is why go for anonymous email when there are plenty of premium featured and free email services such as Gmail, Outlook and Yahoo! Mail available? Well, privacy and anonymity is a digital right — our digital right.