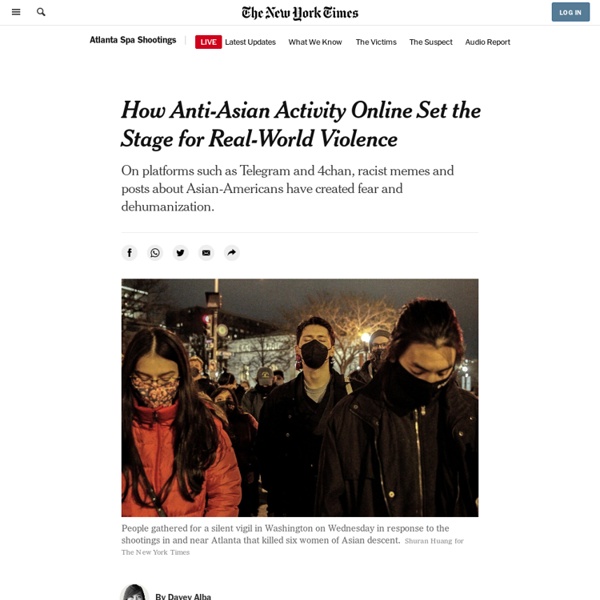 Negative Asian-American tropes have long existed online but began increasing last March as parts of the United States went into lockdown over the coronavirus. That month, politicians including Representative Paul Gosar, Republican of Arizona, and Representative Kevin McCarthy, a Republican of California, used the terms “Wuhan virus” and “Chinese coronavirus” to refer to Covid-19 in their tweets. Those terms then began trending online, according to a study from the University of California, Berkeley. On the day Mr. Gosar posted his tweet, usage of the term “Chinese virus” jumped 650 percent on Twitter; a day later there was an 800 percent increase in their usage in conservative news articles, the study found. Mr. In a study this week from the University of California, San Francisco, researchers who examined 700,000 tweets before and after Mr. Representatives for Mr. Misinformation linking the coronavirus to anti-Asian beliefs also rose last year.

What are deepfakes – and how can you spot them? What is a deepfake? Have you seen Barack Obama call Donald Trump a “complete dipshit”, or Mark Zuckerberg brag about having “total control of billions of people’s stolen data”, or witnessed Jon Snow’s moving apology for the dismal ending to Game of Thrones? Answer yes and you’ve seen a deepfake. Many QAnon followers report having mental health diagnoses QAnon is often viewed as a group associated with conspiracy, terrorism and radical action, such as the Jan. 6 Capitol insurrection. But radical extremism and terror may not be the real concern from this group. QAnon followers, who may number in the millions, appear to believe a baseless and debunked conspiracy theory claiming that a satanic cabal of pedophiles and cannibals controls world governments and the media. They also subscribe to many other outlandish and improbable ideas, such as that the Earth is flat, that the coronavirus is a biological weapon used to gain control over the world’s population, that Bill Gates is somehow trying to use coronavirus vaccinations to implant microchips into people and more. As a social psychologist, I normally study terrorists.

How three conspiracy theorists took 'Q' and sparked Qanon In November 2017, a small-time YouTube video creator and two moderators of the 4chan website, one of the most extreme message boards on the internet, banded together and plucked out of obscurity an anonymous and cryptic post from the many conspiracy theories that populated the website's message board. Over the next several months, they would create videos, a Reddit community, a business and an entire mythology based off the 4chan posts of “Q,” the pseudonym of a person claiming to be a high-ranking military officer. The theory they espoused would become Qanon, and it would eventually make its way from those message boards to national media stories and the rallies of President Donald Trump. Now, the people behind that effort are at the center of a fractious debate among conspiracy enthusiasts, some of whom believe the three people who first popularized the Qanon theory are promoting it in order to make a living. Part of the Qanon appeal lies in its game-like quality.

We must impeach Trump and bar him from holding office again. Now As protecting our democracy becomes an urgent national focus during the final two weeks of Donald Trump’s term, a growing number of officials and citizens have begun debating whether to remove Trump from power, either through the 25th Amendment or impeachment. Regardless of what happens in these coming days, it is imperative that Congress ensure that this president never takes power again. The clearest and most constitutionally appropriate way to do this is for the House to impeach President Trump, and then for the Senate to vote to disqualify him from holding any future federal public office. The power of Congress to disqualify an impeached president from holding office has received less attention through history than the power of Congress to remove a president from office. The Constitution is clear that after a House majority vote to impeach and a two-thirds Senate vote to convict, the president is removed from office.

Fact-checking Hawley’s claim about Pennsylvania’s election law Sen. Josh Hawley of Missouri led the Senate charge against the electoral college certification of Joe Biden’s victory. Much of his argument was based on changes to mail-in voting in Pennsylvania. Pink seesaws across US-Mexico border named Design of the Year 2020 A collection of bright pink seesaws that allowed people to interact over the US-Mexico border has won the prestigious Design of the Year award, with its creators saying they hoped the work encourages people to build bridges between communities. The Teeter Totter Wall, which bridged across El Paso in Texas and Ciudad Juárez in Mexico during a 40-minute session, was described as not only feeling “symbolically important” but also highlighting “the possibility of things” by the judging panel. The creators of the seesaws, Ronald Rael, a professor of architecture at the University of California, Berkeley, and Virginia San Fratello, an associate professor of design at San José State University, first came up with the idea a decade ago after the Secure Fence Act 2006, which started large-scale building on the border. They said they hoped the design would help people reassess the effectiveness of borders and encourage dialogue rather than division.

Pro-Trump outlet misreads CDC report: Expert "disturbed" by scientific misrepresentation For those who find that Fox News isn't right-leaning enough, One America News Network (OANN) has filled that gap. The cable show and news site, though launched three years before Donald Trump won the presidency in 2016, emerged as a mainstay for pro-Trump propaganda during the course of his presidency. The network notoriously amplified Trump's meritless claims that the 2020 election was stolen from him. Before that, it has taken Trump-friendly positions on everything from the supposed "migrant caravan" in 2018 to the claim that the novel coronavirus was developed in a Chinese bioweapons laboratory.

Trump Shifted Campaign-Donor Money Into His Private Business After Losing The Election Donald Trump’s reelection campaign, which never received a cent from the former president, moved an estimated $2.8 million of donor money into the Trump Organization—including at least $81,000 since Trump lost the election. In addition, one of the campaign’s joint-fundraising committees, which collects money in partnership with the Republican Party, shifted about $4.3 million of donor money into Trump’s business from January 20, 2017 to December 31, 2020—at least $331,000 of which came after the election. The money covered the cost of rent, airfare, lodging and other expenses. All the payments are laid out in filings the campaign submitted to the Federal Election Commission. Representatives for the Trump Organization, the Trump campaign and the Republican National Committee did not immediately respond to requests for comment.

How to Fix the Supreme Court, Part One: C is for Clarence - PREVAIL by Greg Olear “If everyone made war only according to his own convictions, there would be no war,” Prince Andrei Bolkonsky thought… A good player who loses at chess is genuinely convinced that he has lost because of a mistake, and he looks for this mistake in the beginning of the game, but forgets that there were also mistakes at every step in the course of the game, that none of his moves was perfect. The mistake he pays attention to is conspicuous only because his opponent took advantage of it.

Attenborough: 'Curb excess capitalism' to save nature Media playback is unsupported on your device Sir David Attenborough says the excesses of western countries should "be curbed" to restore the natural world and we'll all be happier for it. The veteran broadcaster said that the standard of living in wealthy nations is going to have to take a pause. Nature would flourish once again he believes when "those that have a great deal, perhaps, have a little less". Sir David was speaking to Liz Bonnin for BBC Radio 5 Live's new podcast 'What Planet Are We On?'.