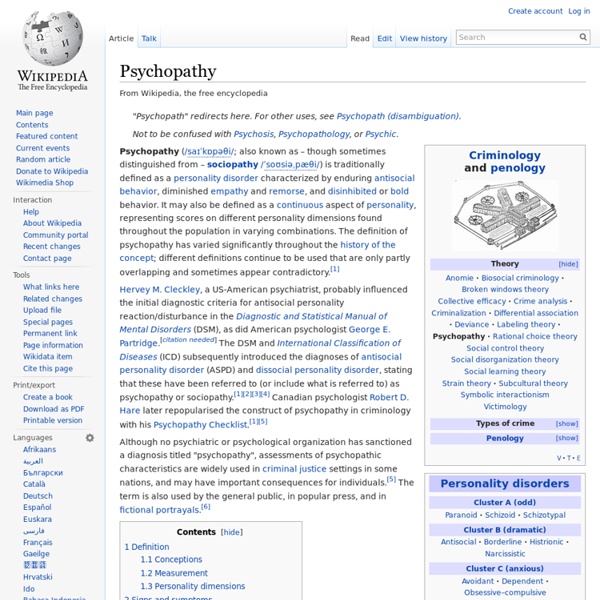 Hervey M. Cleckley, a US-American psychiatrist, probably influenced the initial diagnostic criteria for antisocial personality reaction/disturbance in the Diagnostic and Statistical Manual of Mental Disorders (DSM), as did American psychologist George E. Partridge. Although no psychiatric or psychological organization has sanctioned a diagnosis titled "psychopathy", assessments of psychopathic characteristics are widely used in criminal justice settings in some nations, and may have important consequences for individuals.[5] The term is also used by the general public, in popular press, and in fictional portrayals.[6] Definition[edit] Conceptions[edit] Researchers have noted that there appear to be at least two different conceptions of psychopathy, each with differing policy implications. Triarchic model[edit] The triarchic model, formulated by Christopher J. Boldness. Measurement[edit] Personality dimensions[edit] Signs and symptoms[edit] Offending[edit] Criminality[edit] Violence[edit]

Dark romanticism Edgar Allan Poe is among the most well-known authors of Dark Romanticism Dark romanticism is a literary subgenre of Romanticism, reflecting popular fascination with the irrational, the demonic and the grotesque. Often conflated with Gothicism, it has shadowed the euphoric Romantic movement ever since its 18th-century beginnings. Definitions[edit] Romanticism's celebration of euphoria and sublimity has always been dogged by an equally intense fascination with melancholia, insanity, crime and shady atmosphere, with the options of ghosts and ghouls, the grotesque, and the irrational. According to the critic G. 18th and 19th century movements in different national literatures[edit] Elements of dark romanticism were a perennial possibility within the broader international movement Romanticism, in both literature and art.[5] Like romanticism itself, dark romanticism arguably began in Germany, with writers such as E. 20th century influence[edit] Criticism[edit] See also[edit] References[edit]

Writing...How To Write Paranormal Romance- 7 Tips To Remember A trend that I am happy to see growing is the stronger female lead, often just as skilled as the hero with talents that compliment his. The strong female lead doesn’t have to a ball busting werewolf, to be a strong character. She can be anything from a high school student to shy store keeper, but to be a strong feminine lead, she needs to be able to challenge the hero, to surprise him and possibly be the one who saves him in the end. The paranormal romance gives our heroine a little bit more room to move then other genres, it is for example more acceptable for your strong female character to act more aggressively (werewolf or not) she can be cunning and downright ruthless, as long as it’s for a good cause. (Protecting a loved one, hunting down a killer etc.) Strong doesn’t always mean physically buff, it can be her personality, her talents her choices in hard situations, how she deals with the conflict around her. Tips for writing a strong female character 1. 2. 3.

15 Interesting Motivations for Villains and Heroes I provide advice about how to write novels, comic books and graphic novels. Most of my content applies to fiction-writing in general, but I also provide articles specifically about superhero stories. 1. Romance. Villains frequently have ulterior motives (like marrying Aunt May to steal the nuclear power plant she inherited?) 2. 3. 4. 5. 6. 7. 8. 9. 10. 11. 12. 13. Could I recommend against a stereotypically heroic goal for the heroes or a stereotypically villainous goal for the villains? 14. 15. Feel free to mix and match!

Savvy Authors | Writing Paranormal When I first informed people I was writing a paranormal, I inevitably got one of two responses. One response was from non-writers and the other was always from those more savvy in the publishing field. The first and foremost was, “Paranormal is so hot right now! You’re going to be a millionaire!” The other was, “The paranormal market is so saturated right now. It’s going to be a hard sell.” I am not, what I call, a “what’s hot right now” writer. Secondly, and most importantly, I write what I love. So, you ask, how did you break into an overcrowded field? The other thing that I did was read, read, read. I also really listened when people talked about their favorite books. So, I had a goal I wanted to reach. In the end I believe I achieved my goals, and written something that readers would connect with. J. Evie Shepard’s nightmare begins when she finds herself buried alive, with no idea how she got that way. Somehow she has come back…And she wants revenge.

Dark fantasy Character Traits How to Write a Character From Start to Finish The best fiction is about a character who changes in some significant way. The selfish brute learns to put others first. The woman marrying for money decides to marry for love. The career ladder climber learns to cut back on his hours to enjoy his family. We love to see characters transformed. —by Jeff Gerke Most of the time, main characters in fiction are changing for the better. But there’s also room for characters who change for the worse. Perhaps most intriguing of all is a “bad” character who flirts for a while with the idea of being good, but then decides that his true self is on the dark side of the street. Of course, not every story has to be about a character who changes. Whether your protagonist ultimately turns toward or away from the light will be up to you, but we’ll look at ways to send her on a journey in which she’s transformed. The Inner Journey In fiction terms, a character’s transformation is called his inner journey or character arc. The Nexus The Seeds of Change